Kettering, Tasmania has become a disaster area. The recent nasty shellfish has led to the discovery of toxic waste flooding into the water all over.
Simultaneously, Dr. Anna Macy (Elizabeth Debicki) is stuck in questioning with Constable Fergus McFadden (Henry Nixon) and Detective Brian Dutch (Matthew Le Nevez). Although she is not well. She slips into a daydream or a vision of sorts. They’re worried about her fingerprint up at Mother Sullivan’s Ridge, at the crime scene. Outside, Roy Macy (Anthony Phelan) tries to find out more information on what’s going on, as well as shows concern for his daughter for once. At the same time, Fergus is starting to see how Anna’s changed over the years: “She isn‘t the Anna I used to know,” he tells Dutch.

Anna’s all mixed up. Her mother is dead, she’s been hauled into questioning, everyone is suspicious of her for what happened to Gillian and now Chloe. There is too much going on in her head. But she forges on. She also doesn’t know about Dr. McKenzie flying off the road, either.
Out at the quarantine area they’re taking peoples blood, checking the water, starting to shut down the supply for the town. This means they’ve got to get up past the ridge. Ahhh.
At the mill, Max Holloway (Damien Garvey) is giving his employees the harsh news over the place being sold. Everyone’s out of a job. Then when his son Adam (Brad Kannegiesser) arrives, they have a bit of a scuff. I’m worried about the young man. He is having serious troubles after his time in the woods.
Dutch and Fergus keep on piecing together the murder of Chloe, the events surrounding it. They whittle down a number of people that don’t have an alibi for the night of Chloe’s death. They come down to a fingerprint of a man that supposedly died in ’98; a fingerprint on Chloe. That can’t be any good, can it?
There’s something quite wrong with Adam. He goes home and starts weirding out his mother Barb (Sacha Horler). He doesn’t speak, he only lurches toward her silently. That’s fucking unsettling, even if it isn’t sinister. He’s full of strange marks, moss growing from cuts in his skin.
Fergus keeps trying to nail Dutch, although Dane Sullivan (Dylan Young) isn’t keen on giving information. He’s getting cold feet. And that’s going to throw a wrench into the whole mix.
Anna searches for Dr. McKenzie at her office and lab. All she finds are pictures, a few reports. Then a tape concerning her mother Wendy made by the doctor – the doctor speaks about a “pathogen of unknown origin” among other things. When Anna puts her own blood under the microscope, it looks odd and gives her more to go on.
Craig Grayson (Ben Oxenbould) gets a visit from the State Health Authority working on the quarantine. They’ve requested to go up on Mother Sullivan’s Ridge. Now what’ll happen? 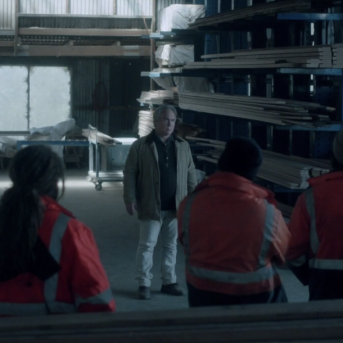 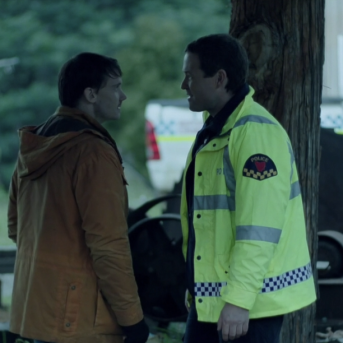 And what about Jens Jorgenssen (Damon Gameau) up in his high perch? He sees many things. Many people. I’d like to know what purpose he plays. It doesn’t frustrate me, the mystery. It intrigues me to no end. He knows there’s something different, or special about the forest out there. I’m eager to find out his secrets.
A confrontation between Fergus and Dutch occurs out in the woods after the former brings his accusations forward. Dutch plays it cool, but there’s no denying he has it in for the detective. So he should. The guy is out of control and a criminal. Worse than that they find themselves stranded on the road once their vehicle refuses to start. Overhead, a strange noise emanates from the sky and starts shaking everything underneath. Afterwards the engine starts fine. Strange, no? Oh, the things that go on in Kettering.
Jens chops a triangle into a tree. We’ve seen this before. Both in the visions of Anna, as well as the van Jens drives. The symbol is a curious one.
For whom or what is that symbol?
Renae Baxter (Suzi Dougherty) has the police come question her about the whereabouts of Travis (Kevin MacIsaac), still missing after being tied naked to a tree and left by himself. Dutch pockets a wallet from the shed before Fergus can have a look. Sneaky, sneaky.
That triangle turns up once more amongst the medical equipment and vials of blood at the quarantine. Curiouser and curiouser, Alice. That’s because Sandra (Katie Robertson) brings it all up to a clandestine meeting with Jens. Y’know, for his little experiments. Oh, my. The triangle is most likely a communication device for the drop offs. Been going on a long time, if so.
At the bar, Dutch questions a few of the old mill workers about Travis. They, of course, do not give up much. Only cocky statements about what they actually did. 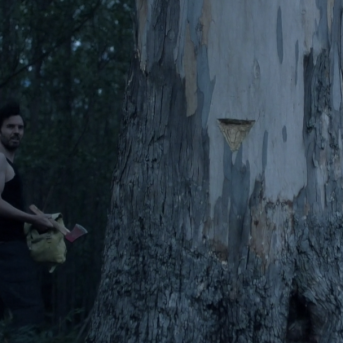 The electrical anomalies are raging in Kettering. Lights are flickering everywhere. Some shut down. A tawny frogmouth perches looking into the darkness.
Dutch has weird dreams of night vision goggles before being woken up by Anna. Their relationship, tenuous as it may be, isn’t something I understand quite yet. Dutch maybe tries keeping her close to see what her deal is, but I still can’t tell for sure. She tells Dutch about being sick, possibly even “dying.” Again, they embrace. Dancing together, Roy and Renae listen to “Crimson and Clover” while Dutch and Anna get more physical.
Meanwhile, Barb takes a handful of pills in her daughter’s old bedroom before going to sleep. This is devastating. I hope she’s not doing herself in, even if that’s what it looks like. Max finds her and makes her throw the pills up, saving her. She blames herself for Chloe dying. It’s clear both Barb and Max need each other to keep surviving, despite all their own personal demons.
After sex, Dutch asks Anna about the night vision goggles. He can’t rid himself of those images. When Dutch gives up the info about a fingerprint from a scientist, the one who died in ’98, this seems to catch Anna’s attention intently.
Something we’ve seen before – Fergus out in kayak. This time, he sits above an aeroplane sunk to the ocean floor. A bit of an unnerving moment. I’m still waiting to figure out the connection, those broadcasts on the radio, and so on.
Anna tracks down Dominic Harrold (Neil Pigot) to find out about the scientist, David Owen. There’s “no chance” he is alive. What I enjoy most is that the infamously unsolved Dyatlov Pass Incident is brought into the plot (see here if you’ve not heard of it before). Dominic says that what happened to those people is the same fate which Owen met.
Grayson and Max are out near Mother Sullivan’s Ridge trying to determine how to deal with the State Health Authority. They find bubbling, nasty stuff seeping out of the ground. Craig thinks they should bury it further. However, I don’t think they appreciate the magnitude of whatever it is they’ve done all those years ago. When they stumble on the moss covered body of Travis, all bets are off. 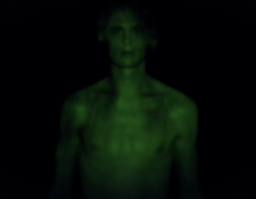 Even though Dutch is a piece of shit, I still worry about him sometimes. Like when he decides going up on the ridge by himself is a good idea.
Out amongst the trees, Roy finds Jens. They struck a deal when toxic waste was piled into the ground out there. But I guess Jens wasn’t totally forthcoming about the effects. Still, the old man worries for his daughter, he doesn’t want her involved any further. He thinks about exposing Jens, what’s he doing up there making people ill and so forth. That would mean putting himself in the line of fire, as well.
Dutch discovers Max and Craig trying to deal with Travis’ body. They’ve uprooted him and haul his corpse off in a tarp, hoping to get it buried.
The new theory of Anna is that Jens is actually David Owen. She brings this to Fergus. Is it too crazy to be taken seriously? Anything’s possible after seeing this episode’s events. Well, Fergus comes back with Roy, who says he has something to show her.
In the farmhouse at Mother Sullivan’s Ridge, Dane and Liza (Tilda Cobham-Hervey) start hearing strange noises. They end up finding a room below the floor. Slipping down, Liza hears an echo of her voice come back when she calls out. An image in the dark looks similar to one of the visions from Anna’s daydream earlier.
Roy was, at one point, trying to help his daughter. At this point, he’s committing her to the psychiatric hospital where her mother was confined. Seems Dr. McKenzie is there, too. She’s a part of it.

Whaaat? Poor Anna. Although I saw that coming a mile away. Dirty bastard, that Roy.
This was a weird and wild, awesome episode. I’m very curious what the final episode of this fantastic mini-series holds for us.
What surprises will see in “The Homecoming” I wonder?