Brian De Palma is one of those classic directors of his generation, leaving his mark indelibly on the psychothriller, often imitating his greatest influence Alfred Hitchcock, though never in a way that rips off the master. Instead he is keen on homage, and uses the influence as an element incorporated into his overall style as a director and writer. He’s honestly not one of my personal top favourites. He is undeniably great, all the same. I do love Carrie, Sisters, Carlito’s Way, Mission: Impossible, but don’t care for some of his more lauded works such as the cult phenomenon Scarface and The Untouchables, other than bits and pieces; they’re good movies, just not fantastic as others claim. I prefer the stuff like Dressed to Kill and Blow Out.
Raising Cain is a nice heady mix of psychological horror, mystery, and all folded into a thriller structure. While this is another film that doesn’t go on my top De Palma, it is fun. Almost in a seedy way. He’s tread through the sleazy, sexy-styled thriller before and isn’t a stranger to that territory. Here, it doesn’t feel as Hitchcockian. Instead the plot comes off more trashy than anything and not in a way that’s beneficial, in say the sense of a grindhouse picture or something purposefully attempting to feel like that. De Palma tries to make another solid thriller that twists and turns, but instead of doing much twisting or turning he opts for a load of nasty business, some steamy bits. Ultimately, the screenplay gets lost in its own convoluted attempts at becoming greater. I wanted to love this and only came out lukewarm even about its best bits. 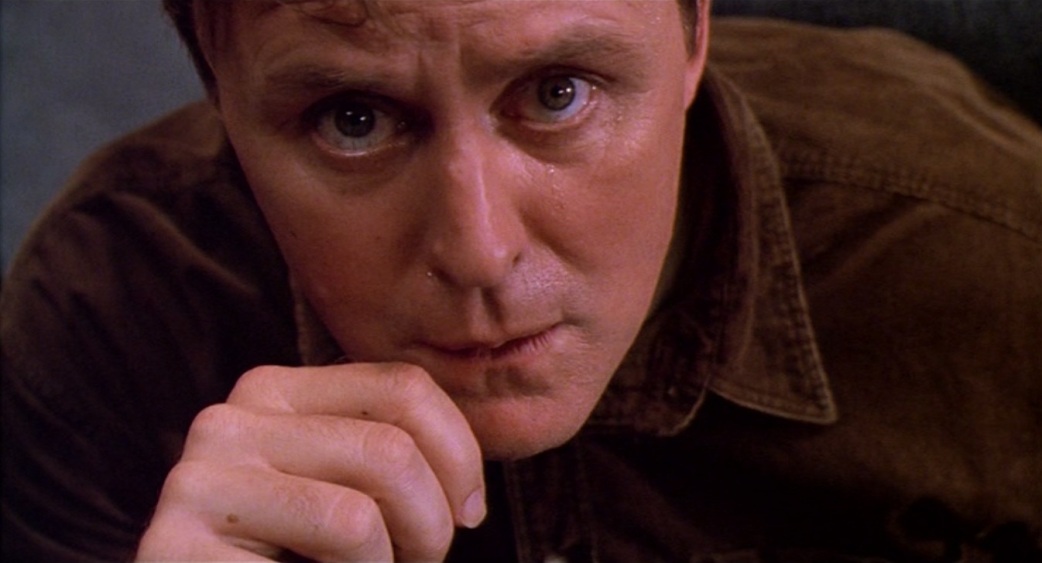 There’s no doubt John Lithgow is a wildly underrated character actor. Although he knocked the role out of the park, 3rd Rock from the Sun never did him any good, or justice. He’s been in plenty of movies since, but I can’t help feel that series put a damper on his career at a later stage, whereas someone like Joseph Gordon-Levitt was young enough to shake it off. And that’s sad. Lithgow is at his best here, taking on a Peter Sellers-like task of multiple roles. Except these are twisted, each more sinister and unsettling than the last. All juxtaposed with the main character, Carter Nix, whose nice and friendly qualities are what you’d imagine Lithgow is probably like in real life. He does well portraying the Multiple Personality Disorder at the heart of the main character. There’s a genuine disconnect between the different perspectives, the different looks and their ways of speaking, and so instead of feeling like he’s just hopping from costume to costume, Lithgow legitimately gives us separate, distinct personalities. Right down to the voices and their idiosyncrasies. All the marks of a classic performance. 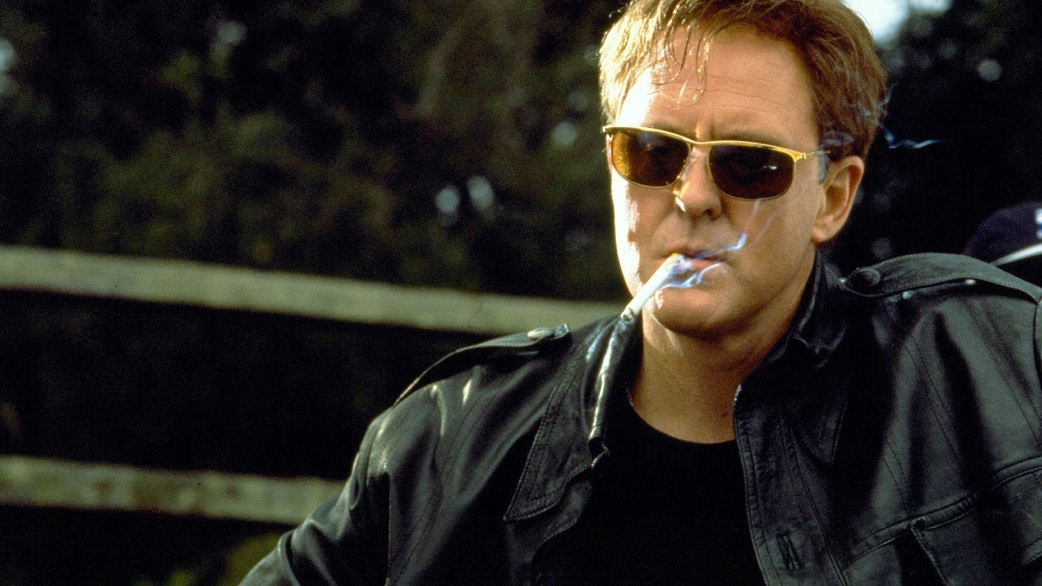 This brings me to a point I don’t exactly enjoy about the screenplay. The whole Multiple Personality Disorder angle is fine, no problem. What boggles my mind is why there’s so much going on. There’s already a large split in the main personality of Carter, so what I’m not sure of is why De Palma insisted on involving such an intricate plot of Jenny Nix (Lolita Davidovich) cheating? Why does that have to be shuffled in there? Only clogs things up. It’s enough to have his wife suspicious of him and his complete obsession with the mental development of their daughter. A little too much to throw in a whole angle with infidelity, especially considering the movie’s only 91 minutes. Not that it’s badly written. Poorly, yes, but not bad. There’s simply too much going on for De Palma to properly juggle.
Partly it’s the end that makes me feel as if, in this film, De Palma goes too hard into his Hitchcock influence. With the whole female personality of Carter, a.k.a Margo, there’s almost too much Norman Bates lurking; in turn, we could say he’s riffing on Robert Bloch, as well. The timing of having this part of the personality come out feels too much like the climactic chills of Psycho for it to be any bit genius in its own right.
There are some real excellent scenes. Such as the simple yet effectively fun tracking shot following Lieutenant Terri (Gregg Henry), Sergeant Cally (Tom Bower) and Dr. Waldheim (Frances Sternhagen) – not only is it beautiful, the Waldheim character is strong, as well as funny in the way she walks on talking, not paying attention where they’re going, only to be lead around forcefully by the lawmen while they trail behind listening. That’s just unbelievably good writing, and without being a major part of the plot or anything of the sort it adds a big boost to the movie. These are the portions in which De Palma’s talent shines. He doesn’t just write weaving plots, he’s capable of doing good things both big and small. 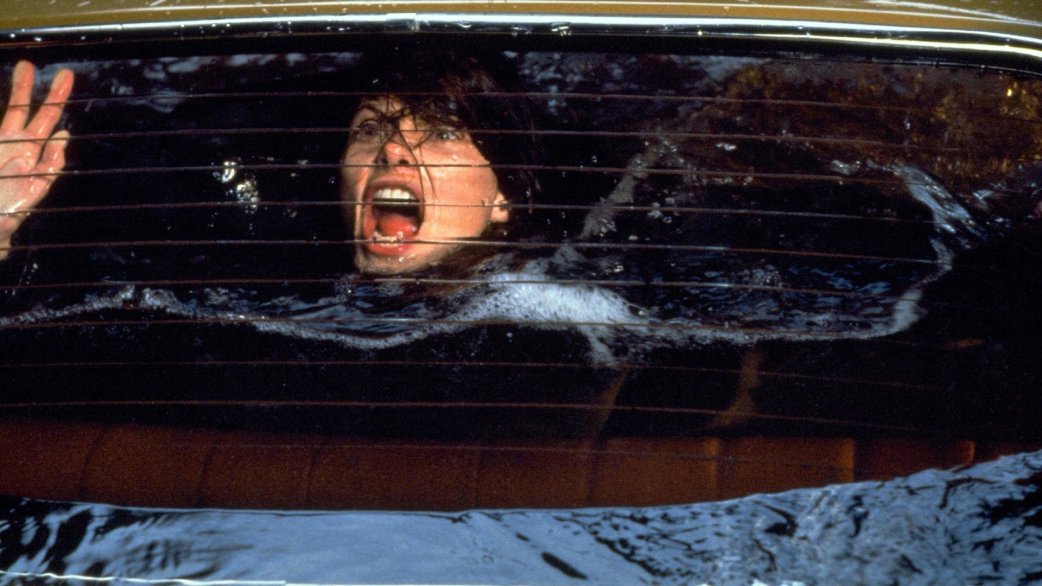 Raising Cain has all the potential to be endlessly interesting. There’s no shortage of thrill, even a chill or two from time to time. John Lithgow is perfect in his multiple roles, bringing to light Multiple Personality Disorder in fine psychological horror fashion. This is a wild, sleaze-filled ride straight off the top until the last frame. Brian De Palma can and has done better as writer-director. His abilities as a next generation Hitchcock are usually on display. This movie tries to aim for that sort of feel, but falls short. I wanted so badly for this to break free of its chains. Unfortunately, De Palma tries doing too much at once. Instead of sticking to something more basic while serving better the thriller aspects of the Multiple Personality Disorder, he goes wide and throws in a kind of Hitchcock-type plot to make things move quickly. I can’t help thinking this would have been better served as a slower burning plot, one without the infidelity of the wife and focused solely on Carter. It doesn’t need so many bells and whistles. It was good enough on its own. Luckily for all Lithgow makes this enjoyable, keeping each eye glued until the underwhelming finale that’s both too similar to a classic of the horror genre and also slightly too predictable for its own good.