* For a review of the following episode, “The Bottoms” – click here

The premiere episode of Hap and Leonard begins with a great bit of action and some good ole CCR (“Up Around the Bend”). In 1968, we watch a car chase heading through Marvel Creek, Texas. Cops are hot on the trail of a couple men who’ve clearly pulled off a big heist. In the backseat, one of them bleeds out, money alongside for the ride. Only the driver does a Dukes of Hazard jump and puts the vehicle into a river. The gutshot man makes it out onto the shore, only to pass out and let fly a bunch of bills.
In Laborde, Texas – jump two decades to 1988 – Hap Collins (James Purefoy) and Leonard Pine (Michael K. Williams) work side by side on a rose farm. They end up fire at the end of the day because cheap Mexican labourers are a plenty. We get a look from Hap to Leonard, almost alerting us to their personalities immediately; Leonard proceeds to tear a bunch of roses up out of the ground. Hap is a little more calm while Leonard is the hotter head of the pair. But they’re incredibly close friends. They do a master-slave routine that might sound dumb put that way, however, it shows the close relationship between them evidently right off the start. Plus, Purefoy and Williams work so well together, their chemistry is what grabbed me quick in the opening to the episode.

Leonard: “You can take a man‘s job, but you can‘t take his cookies.”

The tension in their relationship starts once Trudy (Christina Hendricks) arrives. It’s obvious Leonard does not like her, he warns Hap – obviously Hap’s got a softer spot for Trudy than him. Leonard reminds Hap of an important thing to remember: “A stiff dick ain‘t got no conscience.” But I love Hap, too. They’re both clever and likeable, albeit in their own ways. Hap is honest and straight up, as is Leonard, but they’ve each got their distinct sense of dialogue. Further than that, we get a quick read on Trudy, as well. She apparently criticized Leonard for enlisting and going to Vietnam: “If no one would fight, there‘d be no wars,” she says revealing her innocently ignorant perspective on life.
And no sooner that they end up in bed together does she admit to Hap: “I need your help.” So does she really have all those feelings she claims? Or is Trudy more trouble than we can imagine? Probably a reason Leonard can’t stand her. So Leonard calls Hap up later, even quipping – “Nice knowin‘ ya, brother.”
Love the racial aspect of the series, in the South. All those lingering feelings of the Civil War and other bits of history still float around; to this day. In fact, that’s why Lansdale is suited to be adapted now because it speaks to some of the issues America specifically is still tackling. Even better, Leonard also brings more to the table as a character than simply being black in the South.
When Trudy offers up a supposed plan to make $200,000, all of a sudden Hap seems intrigued. Good for the pocket, bad for the love life/psyche. 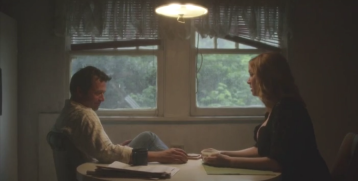 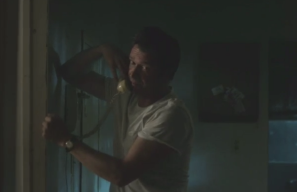 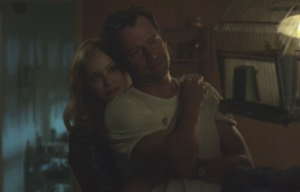 Of course Hap brings the deal to Leonard.  We get more of their relationship here, which is excellently adapted from Lansdale. Their bond is strong, as Hap throws a few obviously joking racial jokes around, and you can tell they’re friends for life because Leonard only throws him a smile. Then he throws a jab, the two of them boxing together. Such a good scene. Then we have Trudy in the mix, which Leonard hates. She talks about her husband Howard (Bill Sage) in prison; he ended up in jail with the man from the beginning – Softboy McCall (Trace Cheramie) – who knew about the money at the bottom of the river. Well that guy met a rough death at the hands of a crazy fellow inmate, over a brownie in the cafeteria. Now, only Howard knows the location. And Trudy wants to cut Hap in because he supposedly knows the location of the bridge on Sabine River, having been no strange to that area when he was a kid.
A local cop comes down to see the boys. Leonard’s Uncle Chester (Henry G. Sanders) got into an altercation and threatened to jam a cane up the officer’s ass – “sideways” at that. But what we see here is the other angle to Leonard and his character. His uncle has no time for Leonard’s homosexuality, apparently: “Keep your faggot hands off me,” Chester barks at his nephew.
We further see Hap’s love for Leonard, as a friend. He quietly hauls Chester aside before they drop him off and explains: “Now I don‘t like dick anymore than you do, but he does. But that‘s his business. He don‘t need you ridin‘ him on it. So you do that in front of me again and I‘m gon‘ take that cane, shove it up your ass, break it clean off. Understood?” I like that Hap doesn’t mince words and act like he’s making an excuse; Leonard is who he is, and that’s totally fine with him. As it ought to be.
More than that, Leonard shows us how fucking tough he is by knocking a big drug dealer on his ass. And I mean he really works this guy over, and quick, too. So don’t bring foolish stereotypes to this series (as anyone who’s read Lansdale already knows) – Leonard Pine is his own man. A great strong gay/black character. 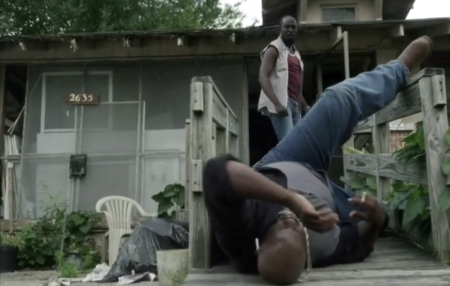 Another thing I love is Hap not being a fan of guns. Between him and Leonard, they defy any pigeonhole you can try to put them in. They are not stereotypes of Southerners, yet at the same time they are very Southern. Which is a commendable aspect of these characters, obviously coming out of the original series of novels. Lansdale’s characters come out well with Mickle writing.
Another angle to the ever interesting Leonard is that he’s a Vietnam vet. Being gay and black, people might expect him to lean towards the counterculture trend that came out of the ’60s and ’70s. No, no. Not Leonard. He’s got no time for it. We figure this out once meeting Trudy’s husband Howard, as well as his buddies Chub (Jeff Pope) and the disfigured silent-type of fellow Paco (Neil Sandilands). Howard is a hugger, embracing Hap right off the bat, and trying to give Leonard one – though, he only succeeds on the former. A hilarious little scene here, which further shows us how determined Hap and Leonard are; they’ve got no time for Howard’s hippy dippy bullshit. While Howard has noble intentions, or at least acts like he does, they don’t exactly impress either of the pair. Especially not Leonard. Also, there is the fact Hap obviously loves Trudy, who bedded him while still having a husband – seeing Howard hold her hand almost drives him nuts. They’ve obviously got an open relationship. Hap isn’t into that sort of thing; he’s a lover, a real one.

Howard: “And where‘s your piece of the American Pie, Leonard?”
Leonard: “Oh, I ate mine.”

The finale of the episode is solid. Hap heads off to do a bit of emotional drinking. A suspicious blue car is at the gas station where Hap buys beer. He ends up at the sign just outside Marvel Creek, Texas. A flashback sees a young Hap with his father Bud (Ron Roggé), driving along in the truck. Bud makes a remark about a black man out in the rain, using the word “nigger” – we can see the learned behaviour here, which Hap obviously rejects as an adult. But it presses the issue of how that sort of thing is passed down by family members, in particular. At the same time, though, Bud ends up stopping to go help. Is there more to this story? Or is this showing us there was a good person underneath Bud Collins, even with his use of that horrible N-word? Either way, it tells us about who Hap’s become over the years in some ways.
At the very end of “Savage Season”, we’re introduced to Soldier (Jimmi Simpson). He’s the one sitting in the suspicious blue car at the station. A police officer goes to talk with him about a taillight, discovering Soldier’s possibly high, as well as the fact there’s a noise inside his trunk. An excellent first scene to introduce this character, plus that of the woman who slits the cop’s throat, Angel (Pollyanna McIntosh). They’re in Marvel Creek looking for Paco. Bloody and violent entry for these two, clearly poised as a big threat.

Amazing opening episode to this series. Exceeded my expectations.
The next episode is titled “The Bottoms” after one of the novels from Lansdale. Stay tuned with me, friends and fellow fans.