George A. Romero started the modern zombie craze with his 1968 horror movie Night of the Living Dead. Ten years later, he came back swinging with Dawn of the Dead. Full of iconic moments, even iconic zombies themselves (see: Hare Krishna zombie), Romero gives us an even more nuanced, darker, and at times funny, bit of horror cinema.
A lot of people nowadays are hugely into the zombie sub-genre. For good reason, as these Dead films from Romero, including the ones after it, are a whole lot of horror fun. The reason why Dawn of the Dead is so celebrated and loved after all these years is because not only does it do a fine job creeping you the hell out, like Romero’s 1968 film, even more than that it again explores social issues. Soon as the characters in this movie make their way to a mall, hordes of zombies trying to get inside, you can tell there will be some kind of commentary on Romero’s part. Dawn of the Dead is written incredibly well, with good characters, dialogue and action, as well as the fact Goblin does the soundtrack, Dario Argento worked on the music/editing, and master of special effects Tom Savini supplied all the zombie nasty work. This is one damn good piece of zombie horror and it’s no wonder we’re still talking about it today as much as we do.

After the dead reanimate and start to feast on the flesh of the living, a group of people hoping to survive make their way via helicopter to a large mall: Stephen “Flyboy” Andrews (David Emge) and Francine Parker (Gaylen Ross), along with two SWAT team members Peter Washington (Ken Foree) and Roger DeMarco (Scott Reiniger). Upon arrival, they try and set up camp finding a safe room to spend their nights, food for sustenance and any other various items they can manage to whisk away from the stores in the mall. Only problem is the zombies have filled up a nice majority of the shopping complex, so they’ve got to maneuver their way around the huge building efficiently, and quietly, as humanly possible.
But when Roger gets infected by the zombie virus, their situation changes. With the situation inside the mall getting worse with every passing day, the group is forced to confront other options; that is, if there are any left. 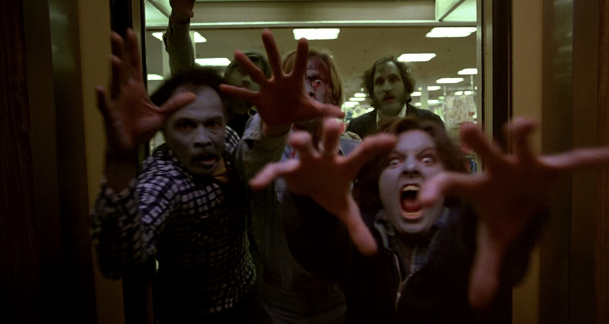 One of the most intriguing things about this movie is how Romero expands on the idea of a post-apocalyptic United States of America. During Night of the Living Dead, we do see a microcosm of the aftermath with all the sheriff’s boys out hunting ghouls and seeming to have a grand ole time, plus there are the news reports and all those aspects. However, with Dawn of the Dead this plot allows Romero to give us a bit bigger of a look at the post-zombie society. Big part of that is the mall itself.
When they first arrive, Francine questions why the reanimated corpses would be at the mall, to which Stephen replies “Memory of what they used to do; this was an important place in their lives“. Later on, as the group listens to a radio, a commentator talks about remembering past lives and how the actions of the zombies are merely them working out what they once used to do. The thing I find interesting, the social aspect of Romero’s screenplay, is how he chose the mall/shopping complex itself. It speaks volumes about human society just in the number of living dead wandering around the building and outside; it’s evident how involved we as humans are in consumerism already, but Romero – back in 1978 – was already on to the fact we’re creatures of habit, as well as creatures of leisure wanting to shamble our way into the mall, mindlessly picking away at the things inside (a.k.a “shopping”). So I think, again like his first zombie movie, this one can be considered relevant today, if not even more so than it was on its original release. The way we consume things as a society of people has gotten out of hand, especially now in the post-2000 world. Say what you want about Dawn of the Dead, or the films which follow it/the one preceding it, Romero infuses his horror with a ton of commentary. Not every last shot is done like this. Overall, though, you cannot deny Romero’s zombie films encapsulate social products of their time and even then they go on with their strength for years. I won’t be forgetting these films any time soon, if ever. 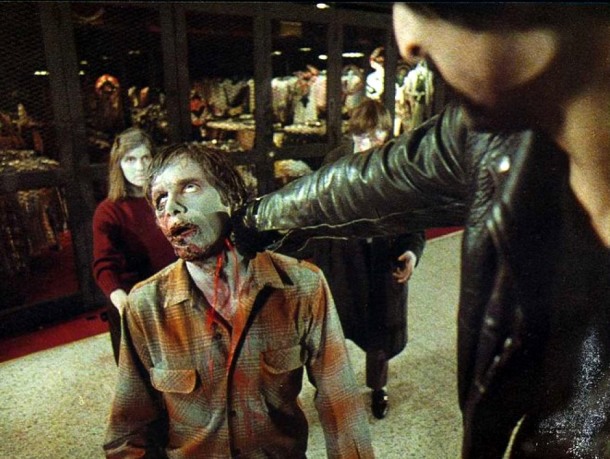 I have to talk about Tom Savini. As someone whose love for horror grew out of older films intent on using practical makeup effects, before CGI ruled the industry, Savini is one of my personal gods. Honestly, even the first three films he worked on show off his immense talent – from his uncredited work on Bob Clark’s Dead of Night and putting his hands into the loose Ed Gein inspired Deranged, to doing fun stuff on Romero’s 1977 unusual yet awesome vampire flick Martin, to the stellar makeup/special effects he did in this film. I won’t go through the man’s entire filmography, but I’m just trying to show you how immediately Savini made an impression on the horror movie industry. In fact, Romero wanted him to work on the original ’68 Dead film. Unfortunately at the time Savini was called off to war; he actually applied some of the nastiness he saw during the Vietnam war as a combat photographer to the special effects/makeup he did in films. Luckily, they got together for this movie and did  a ton of bloody, fun horror work.
The look of the zombies alone is great. There’s a satirical part in how they look, as they’re all zombies yet representative of our own zombie-like qualities as humans. So while I’ve seen some horror fans wonder why the zombies are blue-ish coloured, I think there’s a wickedly dark comedic edge to their look. At the same time, they’re still fucking terrifying! Not just that, the head shots and the flesh eating and all that rotten business works well. Most of all, it’s the blood itself I find so wonderful. There’s nothing like a good looking bit of blood on camera and something about the blood in Dawn of the Dead is at once cartoon-ish and simultaneously nauseating: its rich red makes it appear almost like paint, like comic book blood, and the thick texture of it seeping out of chests/heads/et cetera has a visceral, raw essence which is kind of gross. Needless to say, without boring you too much to death on my thoughts about the effects overall, without Tom Savini this would not at all be the same type of horror film. Furthermore, I’d venture to say the zombie sub-genre wouldn’t be as rich and magical in terms of effects if Savini hadn’t done such good work with Romero here. This movie has influenced so many filmmakers and endlessly captivated the minds of legions of horror fanatics, and will continue to until the end of time. 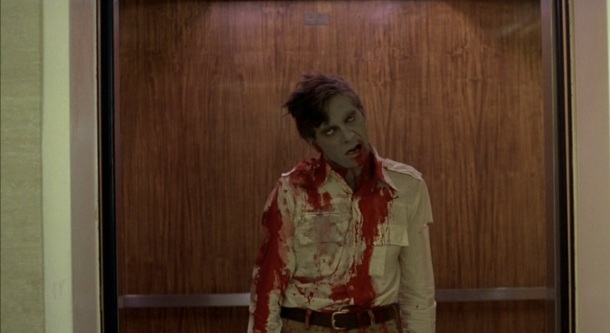 It’s hard to say anything that’s not been said before concerning Dawn of the Dead. One thing is for sure, though, George A. Romero is the man who gave us modern zombies and this film is an intense piece of horror cinema which dives further into the zombie lore he created in 1968, as well as touches on aspects of human nature from friendship in close quarters to a reflection of our inherent consumerism as people in the 20th century. 5 stars, right through the roof and to the sky!
As I said in my review of Romero’s first zombie feature, Day of the Dead is actually my personal favourite. All the same, each of the three first films in his Dead series are perfect in my mind and neither are technically better than the others, at least that’s how I see it; I just prefer Day over the others, something more apocalyptic and foreboding about its plot.
Regardless, Dawn of the Dead constantly affects me, it always entertains and I love the two-disc DVD set this came in, which I ordered a few years back now. Lots of fun features on the release, as well. If you’re a fan it’s worth the cash. If you’ve not seen this: smarten up and watch it for Halloween.