The opening scene in this episode treats us to a view of the past. Slowly, we’re unravelling the truth about Constance (Jessica Lange), her eternally troubled son Tate (Evan Peters), and both of their relationships with Larry Harvey (Denis O’Hare).
This sequence shows them all together at a dinner table, nice meat and other assorted foods presented to eat, and Addie (Jamie Brewer) is also present. Another flashback to a different time. This is when Larry’s family has already burnt up, after his wife discovered the affair with Constance, and now Larry has become the stepfather of the Langdon house.
However, we’re finally drawing back the curtain on Larry and his mysterious burns. Now we see that Tate, before going in to kill his classmates, poured gasoline over his new stepfather and set him ablaze at his office building, while Larry was trying to work a regular day behind a computer. Vicious and macabre beginning to “Smoldering Children.”

At the same time, Ben Harmon (Dylan McDermott) has finally come to realize that his wife Vivien (Connie Britton) told the truth all along: the Rubber Man did something to her, he attacked and raped her. After coming to see the light, Ben is able to help get her out of the loony bin. Unfortunately, though, Vivien does not want to go back to that house. Obviously; who would?
Things are clearly messed up at Murder House. Ben’s also coming to see the full extent of how hard everything has been on his daughter Violet (Taissa Farmiga). She has missed 16 straight days at school, so he can see how depressed she is, how weak and fragile to the harshness of the world she can be. But there’s something else worse going on in the house, all around them at every turn.
One thing I love about American Horror Story, every season, is how there are plenty of anti-heroes. Then, there are also just not likeable characters who you also simultaneously can feel sorry for at certain times.
For instance, while Larry Harvey has done terrible things in his lifetime, he is also a tragic figure. I do think he’s awful for having an affair with Constance behind his wife’s back – but in the same breath, I feel bad because he’s been manipulated by her. She only wanted back in Murder House, that’s all she ever wanted, so from the beginning the guy has been a means to an end; never an end in and of himself. So, even with all the bad stuff in his character, there’s likability at moments. In the scene during “Smoldering Children” where Constance goes to see Larry, accusing him of killing Travis (Michael Graziadei) because of jealousy, I really did feel for him. He was cowering and looked so pathetic, it was real touching, sad stuff.
An intensely satisfying scene comes when we discover how Constance dispatched of her husband’s body: ground up into dog food. I mean, that is perfect! I wondered why his bones hadn’t turned up in the hole out in the yard where Moira (Frances Conroy/Alexandra Breckenridge) was found earlier in the season. This was just too good for words. 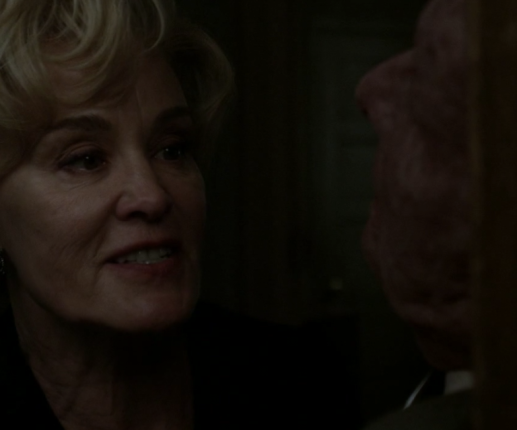 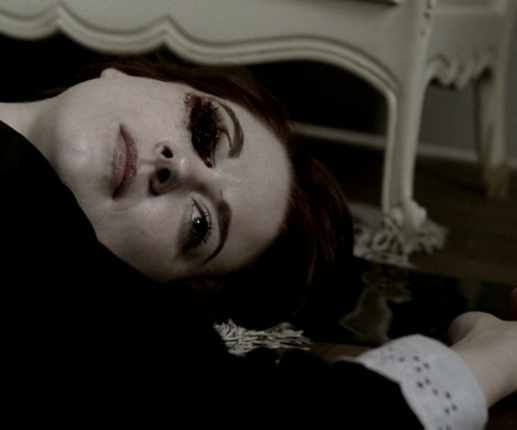 Very quick and creepy scene with guest star W. Earl Brown playing Phil Critter – an exterminator whose expertise is called in by Ben Harmon. Murder House seems to be having an epidemic of flies and other bugs flittering about, so Phil gets into the crawlspace and tries to root out the problem. However, too bad for Phil, as he comes across Tate Langdon down there; the young man attacks him, claiming he has taken lives and deserves to repent for his sin, and shoves the bug repellent sprayer down Phil’s throat. SAVAGERY! Love a good, brutal horror kill like that. Just goes to show American Horror Story isn’t solely about that high aesthetic feel all the time. There is downright shocking and gory horror sometimes, along with brutish kills such as this one.
Even further with Larry, we see him reunite with the titular smoldering children, as well as his deceased wife. He promises her Constance will pay for what she’s done, however, his wife reaffirms it was only him who did anything to the family; he was the one who broke his vows. A tragic scene, as it seems to constantly roll in when Larry is concerned. I feel bad, yet don’t feel bad. Sort of a war within myself. Part of it has to do with the burns; I always feel bad if I see someone scarred so viciously by fire, it’s a truly horrific thing to have gone through. Still, it’s tough to give in totally and feel pity for Larry, as so much of his fate came by his own filthy hands.
What we’re seeing more now in the past couple episodes is how much Tate has to do with the influence of the house. It’s as if the walls have assimilated Tate into its structure, he’s become like a figurehead for Murder House and its vile intentions.
In “Smoldering Children”, it’s obvious how deceitful and misguided Tate is because we’re seeing him manipulate Violet. Instead of telling her the truth, he wants to commit suicide with her.
But then, she comes to discover something extremely tough to understand: “it’s too late for that.” Violet is already dead, she killed herself and became a part of Murder House herself. I’d suspected this ever since her long absences from school first became apparent, now it’s a confirmed fact. Violet has been wandering awhile in the house as a ghost, no different from Tate, the Montgomerys, or any of the other entities. While I did suspect this, I was still shocked by the revelation. That’s how good this series is, you can get lulled into a feeling by the way they present the story and plot/sub-plots, then out of the blue an episode will show things in a certain way that it comes to have a strong impact. Such an example comes in this episode with Violet’s revelation.
When she sees herself curled up and dead on the floor – reminding me very much of the dead bodies from The Ring – it is WHOA! Great, emotional moment between her and Tate. And while some may see this as Tate being more likeable, after trying to ease her into the realization, he’s still a dirty little bastard. He raped Violet’s mom, he has killed and maimed and tortured countless men and women. The afterlife love he has fell into with Violet does nothing to change his character, except it blinds us to his true intentions. This comes out in spades here.

Being accused of killing Travis, Constance ends up saved from the predicament by Larry; he takes the fall for the murder, giving up details nobody else could’ve known. Of course it’s all because of his affiliation with Murder House. I love this scene because we get a trove of treasure out of O’Hare – from the way he talks to Constance, his shuffle and the arm held against his chest, tendons burned into that position by his fiery accident. A marvellous performance!
Also, I found this portion of the episode to be fitting. Larry decides it is high time he pays for everything he’s done, all the crimes and the death he has caused by his very own hand, so that’s why he decides to let Constance go free and take the wrap. But tragically, again with Larry, he’s too in love with Constance. He could’ve turned himself in for crimes, other ones, instead he decides to let her walk and take that punishment. It’s a sad scene when she goes to see him in jail, but it’s beyond perfect and eerie and sad and beautiful.

Next episode is titled “Birth” – the penultimate episode of Season 1, and it is directed by series regular Alfonso Gomez-Rejon.
Stay tuned for more horror and tragedy and all around weirdness.