The title for this episode comes from Thomas Cole’s View from Mount Holyoke, Northampton, Massachusetts, after a Thunderstorm. Otherwise known as The Oxbow.
I wonder where the series will give homage to the 1836 oil painting?
Brad Ross (Elliot Knight) is having a rough go of things. But at least now he’s got Garrett Hawthorne (Antony Starr) in custody. He’s got the missing piece and Garrett’s knife matched. Flash to 2002, as Madeline (Virginia Madsen) finds her son, covered in blood, holding a knife. “What did you do?” she asks.
Well, we’re not given a straight answer. He looks incredibly guilty. But what more is there. Much more, I bet. Madeline visits him in jail and tries to start spinning things in her favour, to help her son. Or is it mostly to help herself? For now, Garrett has an attorney working for him, although he’s not particularly worried about what she’s doing. Instead he rattles off quotes from Horace Mann: “If evil is inevitable, how are the wicked held accountable? Why do we call men wicked at all? Evil if inevitable, but it is also remediable.” Back to 2003. A younger Garrett wakes up before his family arrives at the cabin, he takes off into the woods on his own again. While breaking into a cabin, he comes across Al Jenkins (M.C. Gainey) who isn’t exactly convinced with his story of just being out on his own, away from Boston. You can tell there’s more to that relationship.
In the current day, Garrett gets a call from Cam (Justin Chatwin) in rehab. Both brothers in their own respective cages. The older of the two apologises for getting his younger brother close to drugs the last time. Cam doesn’t think he needs to, but Garrett feels guilty generally for never being around. He confides in Cam: “You stayed true to yourself… I‘m so proud of you.” Cut back to the younger Garrett, out in those woods. He chases a rabbit with a knife until coming across Al once again. They have a bit of dinner together around the fire. They bond. This leads to Garrett getting his own cabin after Al leads him to the place of a now dead old man. And the life of the wandering Hawthorne begins. Al teaches him a thing or two about surviving on his own.
In present day Alison (Juliet Rylance) doesn’t believe her brother was an accomplice of any kind to the Silver Bells Killer, their dear ole dad. Who knows what’s left to be done for the elder Garrett brother at this point, though. In other news, Alison has Jennifer Windham (Sarah Power) started on a bit of dirty work trying to dig up dirt on the current mayor. Ah, the greasy Hawthorne ethic comes out strong in this one. 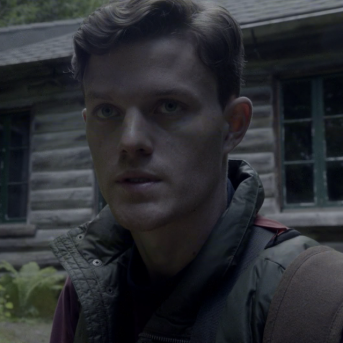 Slide back to 2008. Al tells Garrett about losing a niece, as they bond over family members to which they were close; Garrett talks about his sister Tess (Megan Ketch) and how they were the closest of all the family. Speaking of Tess, she is certainly not convinced about her brother, either. She keeps telling her husband there must be some other explanation. However, Brady does not get her “loyalty” to a guy like Garrett. He suggests confronting her brother, seeing if he’ll confess or deny it to her face.
It’s on!
The painting from which the episode gets its name is all about the confrontation between wilderness and civilisation. We see that represented totally through Garrett. As the years pass, he stays in the woods, away from civilisation. Away from his family. He peeks in occasionally. He buys a newspaper to read Cam’s cartoon Roger’s Cube. There’s part of him that doesn’t want to let go. He gets his number to Tess without being seen, so they can get in touch: “If you need it,” Garrett lets her know. Their bond is so obviously a deep one, a caring one. Great scenes between those two.
When Tess goes to see him in jail things have changed. At least a little. Garrett’s mostly only concerned with his possible niece or nephew coming along. He doesn’t want anybody worrying about him. Tess asks him point blank about the knife. Her brother won’t answer what she needs to hear, casually suggesting his guilt. The change in their relationship is becoming more of a divide. Everyone’s opinion of Garrett has gone 180 degrees.

Jennifer’s been tracking the mayor. He meets with Detective Linda Cutter (Deirdre Lovejoy) in secret. What exactly are they doing?
We see more of creepy little Jack (Gabriel Bateman) visiting his uncle, being weird. Talking about the bubonic plague and other happy things. He mentions seeing Christina (Catalina Sandino Moreno) at the hospital near the ultrasound department; Garrett tries calling her, but no luck in talking much. Then he calls his lawyer, desperate to get out of jail: he’s going to be a dad.
There are big things happening in the Silver Bells case. Mainly the police department is getting their ass kicked by Garrett’s lawyer. She starts bringing up chain of custody, mishandling evidence. Might not be long before Garrett does see the light of day.
Switch back to ’08. Garrett finds Al in pain on the floor, his heart aching. He’s writhing in agony. “This is it,” he says. Death is coming for him. So Al begs his friend: “Help me die.” Of course Garrett refuses. The begging becomes desperate until finally he agrees to help Al along the way. He holds a pillow over the man’s face and eases him into the afterlife.
Seeing this, can we actually now say that Garrett was an accomplice to murder? Definitely not in the first hand sense. He could barely help a dying man go ahead and die. There’s reason to suspect he may not be a killer whatsoever.
Then 2016 rolls around, and Garrett heads back to the city when his father’s ready to die. Present day, he sits behind the walls of prison. On the television he watches Jennifer Windham reporting on the Silver Bells Killer. Someone holds her hostage, making her read a note claiming himself as the true accomplice. 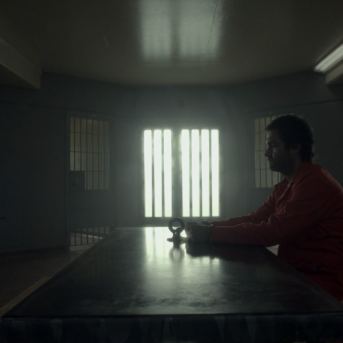 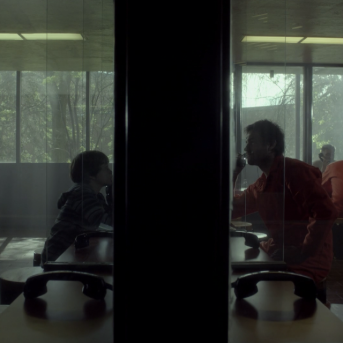 In 2002, after Madeline walked in on Garrett with the blood stains over him, the knife in his hand, she asks what he’s done. The young Garrett replies: “He tried to kill me.”
Everything gets deeper and deeper, with every turn. A solid entry into the first season. Great episode! Suspenseful, mysterious.
Next is “The Veteran in a New Field” and is titled so after an 1865 painting by Winslow Homer depicting a man using a scythe in an open, empty field. You can find that painting here.