By now I probably don’t need to recount the plot of The Last House on the Left for anybody – you’ve either seen this version, or you’ve seen the Dennis Iliadis remake from 2009 with Garret Dillahunt in the David Hess role. There isn’t much to say either, really. The plot for the film is deceptively simple. Two girls are brutalized, and after the assault their attackers end up taking refuge for the night at the home of one of the girls.

Of course, as Wes Craven explains he was highly inspired by Ingmar Bergman’s The Virgin Spring (itself based on a medieval Swedish ballad called “Torre’s Daughters in Vange”). Though some people may scoff at Craven thinking he’s less than he is (he isn’t – he’s more, in my opinion), the plot is basically the same as both of these other works. I can absolutely see how Craven was influenced by Bergman, who was in turn given inspiration by the old Swedish ballad. They are all quite along the same lines.
While the stories are all similarly themed, Wes Craven takes the brutality just a little bit further. Just a little.
One of the first reasons The Last House on the Left is worthy of more than just the grindhouse/exploitation label that it often gets is the writing. Like I mentioned, Craven’s influences are more than just other violent films. Bergman’s The Virgin Spring is a powerful piece of work. For Craven to take that story and transpose it into a modern setting is noteworthy. Not many horror films at the time were really aiming towards that lofty of a goal. Mostly they were concerned with supernatural horror, psychological horror, creature features, and slashers. Not that I personally have any problem with any of those sub-genres of the horror label; I love all horror.
But certainly none of them were attempting to take the themes present in films made by European arthouse-type directors like Ingmar Bergman and put them into horror films for American audiences. Even if people don’t necessarily like The Last House on the Left it’s hard to say it is the same as everything else. Deep down it isn’t.

I love the early shot of Krug (Hess) walking down a sidewalk with a lit cigar in his mouth. A small boy is standing next to a store holding a long balloon. It happens to be at his mid-section, or a little below. Krug pops it, effectively destroying the boy’s figurative manhood. Of course, later Krug and his son have some very intense confrontations. There are a lot of father and son issues coming up in The Last House on the Left. Coupled with this first instance of manhood symbolism, Sadie (Rain) later asks Krug and Weasel if they’ve ever heard of Sigmund Freud (she butchers the pronunciation naturally); she remarks how a light pole isn’t a light pole any more, but now it’s a phallus (once again butchering the pronunciation hysterically). If anybody ever doubted Craven’s writing abilities, they clearly aren’t paying attention.
Most of the film, of course, is heavy handed. Not that I mind, but there’s definitely nothing subtle here. What I will point out is the bits of dark comedy Craven peppers into the story. The cops here are ridiculously inept. Almost to the point where you can’t laugh, and all you can manage is a deep, heavy eye roll. Right into the back of your head. But it works. In 1972, normal people were really starting to question police, more and more with every year. They were starting to question their government in regards to the Vietnam War, all sorts of different things. Craven had the balls to outright make fun of the police here; full stop. He doesn’t pull any punches. These cop characters are as stupid as any you’ll ever see on film. And it works.
My favourite bit is when one of the officers comes in and he’s looking really authoritative, his arms crossed and in the foreground of the shot looking masculine – then he quietly asks if that’s “the last of the cake“. I almost cry laughing each time. 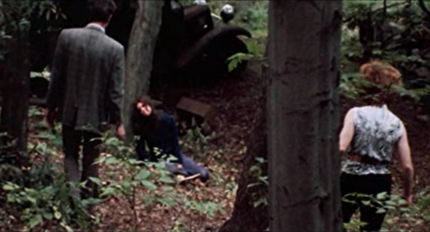 However, it’s the way Craven juxtaposes such lightheartedness with moments of pure terror that really sets the films gears into motion. It’s what disturbs. Along with the comedy, Craven uses some really goofy, out-there music for the score behind the weird and violent acts Krug and his gang commit against the girls. While these people are assaulting the girls, making one of them urinate herself, and so on, there’s this real silly music going on. Some think it’s a real misstep in tone. Really it’s great direction on Craven’s part. Because it almost elevates the madness.
The score devolves soon enough into more frightening tones. Once Krug, Sadie, and Weasel kill one of the girls, the film’s score gets more electronic, more dark and brooding. Then Craven pulls off yet another strange, but effective, move. After a scene of terrible sexual assault by Krug, there is a beautiful little tune playing while the remaining girl walks off into the lake.
Then Krug fires a bullet into her, interrupting the song. Silence for a moment followed by another shot or two. The brutality sets in as everything goes quiet. Craven really works the score and soundtrack well together with the moments of absolute depravity and even the sexual violence. It makes the disturbing scenes more than just disturbing, and more than just watching some characters torture a couple other characters. He makes these bits film worthy.

The performances aren’t anything particularly amazing. Other than David Hess and Sandra Cassel I wouldn’t really rave about any of the actors. Cassel had a particularly difficult job. It couldn’t have been easy to play Mari Collingwood especially back then when these types of films weren’t really common. At least not at the level of this film by Craven in terms of disturbing content. Hess is incredibly sadistic, mean, and scary here. His Krug Stillo is one of the baddest and craziest villains of any horror movie. He doesn’t need a mask or anything to hide behind. That’s part of the reason why I love the character; he is a horrible guy, but his tough guy attitude is admirable, in the sense of watching a character (as a human being, obviously, he’d be deplorable in every way if he were a real person). I think Hess definitely got into his roles, not just this one. The Last House on the Left is certainly one of Hess’ crowning achievements in the horror world, and the role he’ll no doubt be best remembered for years and years on into the future.
As a film I give this a 4.5 out of 5 stars. Nearly perfect, as far as a horror goes. And especially considering this came out in 1972. A lot of people don’t take this film seriously; they either think it’s complete trash, or it’s too horrifying. I believe, as a serious horror film, The Last House on the Left is underrated. Yes, everyone knows about it. Yes, most of us have seen it. But no, not enough people understand how great it is, and how it was innovative in its own right. It most certainly inspired other filmmakers, and cemented Craven as someone who would go on to achieve bigger, better things in horror for years to come.
One additional note: the fight between Mari’s father and Krug is one of my favourites on film. Once you listen to the commentary, it gets even better – way god damn better! Gnarly to hear Craven and Cunningham talk about some of the more unexpected moments during production of the film. Lots of weird and wild moments while filming.
My only complaint are the editing issues. Certainly this could have been edited better. I feel like there are some little bits and pieces that could’ve been rearranged. That being said, I don’t think it ruins anything. There are just a few places I think would’ve benefited in regards to pacing if Craven had changed a few spots.

The Blu ray release is absolutely perfect. I cannot get enough of it. The mood and tone of the film is really something; great atmosphere. Seeing The Last House on the Left  in high quality really makes it that much better. You really get that grindhouse feel when watching it on Blu ray, and that’s something to cherish. Also, the special features are great. There is a nice little documentary called Celluloid Crime of the Century featuring good interviews with both Wes Craven and Sean Cunningham, which provides a lot of valuable insight. There are a few other bits and pieces including an unfinished short film by Craven called Tales That’ll Tear Your Heart Out, a featurette about scoring the film, another feature on the legacy of the film, and more. There are really a lot of extras on this release. It’s absolutely worth the price. You will not be disappointed by the extra features here whatsoever, if you’re a big fan of the film.
I can’t recommend the original version of this film enough. Not that I can’t stand the remake, but I think the original is the best. It has a wonderfully gritty feel that you cannot deny. There are bits of comedy and insanity and depravity and violence and horror all mixed into one. It’s a mixed bag of tricks from Wes Craven – though it’s a really awesome mixed bag. Ride this one through all the way and you’ll love it. Once you love it, the Blu ray is the way to go with this one – every time. Go pick up a copy and enjoy a heap of awesome featurettes about the film.