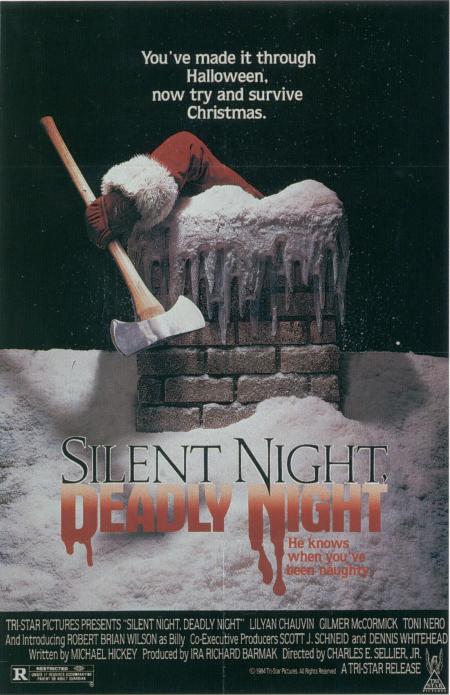 I’m not exactly huge on the killer Santa premise. I don’t really know why. There’s just a certain point I reach where I can only take a certain setup serious after so long of being worn out. For instance, the zombie sub-genre of horror is really tired at this point. For me, anyways. It’s only now and then with zombies nowadays where I can say they were done well mainly because a lot of it is just derivative of everything which came before. Of course people always say “everything has already been done”, which in itself is a stupid thing to say, but we’re not going there. The Killer Santa is one such premise that is just the same thing over and over and over. There’s never any different angle other than some guy experienced a painful trauma involving Christmas or Santa Claus – cue: killing spree. Sure, there are maybe unique methods of killing taken up in a few of these different movies, but other than that they’re all very much the same.
All that being said, I do enjoy Silent Night Deadly Night a bit because it does not pull any punches. Although I think some aspects of this Christmas horror are very typical trope-like moments, it’s still a fairly unflinching horror film that refuses to be anything but depraved.
This movie shows us the life of a young boy who witnesses his parents murdered by a man dressed in a Santa Claus suit; he has evidently been having fun on a crime spree, murdering people, stealing money. The boy ends up in an orphanage under the care of some (stereotypical) harsh nuns, lead by a cruel Mother Superior. There, he experiences abuse at their hands.
Cut to ten years later. The boy, Billy, is out of the orphanage, eighteen-years old, all grown up, and the nuns are attempting to get him a job. Soon he starts working at a big toy store. He is a model employee. However, once Christmas rolls around Billy starts to slip, and everyone begins to notice. More and more things start to go wrong for Billy. Worst of all is when his store manager makes him dress up like Santa for the holidays. Slowly his mental grip begins to loosen, as poor Billy struggles not to let out years of repressed sexual frustration and hidden murderous impulses. 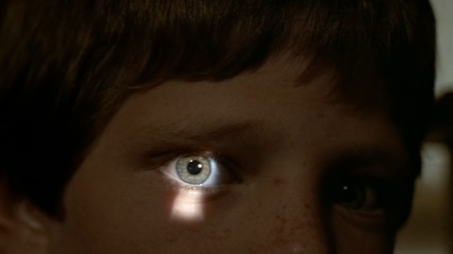 The first thing I have got to get off my chest is the terrible 1980s montage. It begins after Billy gets the job at the toy store. Pure cheese. You’d almost expect it to be the beginning of some campy 80s sitcom; I sit there and wait any time I watch this because I know the montage is coming. Kills me. Not in a good way, either. There’s camp, and then there is pure cheddar; this is definitely the latter. Even though I know what happens, I anticipate Billy or the store manager to turn towards the camera, point and smile, or do a goofy gesture, as their name appears in print across the screen. It’s downright hilarious when I’m positive it isn’t meant to be, which makes it even worse. I guess this is one scene that really dates Silent Night Deadly Night because it is awful, awkward, and will make you laugh out loud for the wrong reasons.
I’ve got to give it to Billy – his first kill as Santa is pretty savage.  It’s a double kill. First, he strangles a man out with Christmas lights while lifting him a foot off the ground. Pretty Michael Myers level brutality. Before he lets the guy drop you can see the light cord cutting through the skin, blood seeping out. It is pretty decent for an effect that didn’t require too much work. He proceeds to then stab a woman to death. This isn’t anything too special, however, it isn’t bad either. So I have to give points to Santa Billy. His rampage is fairly nasty. I think a slasher can really be terrible if the blood looks awful; one thing Silent Night Deadly Night has going for it is the fairly decent looking blood mix. Plus, several effects were executed in pretty proper fashion – in particular a hammer to the head of one character looks awesome, as another store employee stumbles upon his dead body. I can’t knock the film for having terrible practical effects because there are a few great ones. Another I liked is the arrow gag – came as a surprise and also looked fairly grisly, especially once Billy’s victim was laying on the ground. Also I love the kill when Billy mounts a girl on some antlers. There are actually a bunch of cool death scenes in this movie. Good stuff!

Silent Night Deadly Night really follows the trope of ‘sex equals death’. Partly I would imagine that comes from the plot itself. Now, whether the filmmakers came up with the plot first and then worked that in, or the other way around, I don’t know. Regardless, I think this is one of the reasons the movie falls into a category with a lot of fairly forgetful slasher horror movies. The holiday setting of the film is really one of the only aspects which makes it stand out amongst countless slashers.
Not that I don’t enjoy it – I do.  I just don’t think it’s anything special. I love to throw it on at Christmas because I’m a horror hound; I love anything horror. Around the holiday season I love to break out all the Christmas-themed movies in general, especially horror, and give them all a watch. Just as many do for a yearly ritual and tradition (The Muppet Christmas Carol is top of my list each year). Past that, though, there isn’t any other time I would put on Silent Night Deadly Night. Whereas I’d put something like Black Christmas (1974) on any day of the week because I absolutely love it, and coincidentally it just so happens to be set during Christmas. Although I would absolutely watch this again over choosing P2, which is one of my least favourite Christmas movies so far.

I can safely give Silent Night Deadly Night a 2.5 out of 5 stars. It isn’t total trash. On the other hand, it’s not nearly one of the best slashers out there. Not even close by a long shot. While there are some really excellent kills (top choice goes to: antler death), this doesn’t make up for the by-the-numbers slasher. Some slashers can be innovative, such as those which set certain trends followed by later films, while others simply follow along to those already set trends. Silent Night Deadly Night, while only being released in 1984, already fell into many of the typical traps of tired tropes in the slasher sub-genre. Particularly, as I mentioned starting out, a lot of these “Killer Santa” movies play to the exact same plot. While there are tons of slashers out there, even some of the worst ones (not many but some) at least try to switch things up and add something new.
Silent Night Deadly Night doesn’t do much new with the slasher sub-genre, or for the Christmas horror movie overall. If you do want to pick a decently bloody little horror with a Christmas theme, you can absolutely do worse. Just don’t expect to put this one on other than a week before or after Christmas. Aside from its holiday premise, there isn’t much else to sink your teeth into, but Santa is coming to town – and he’s got some serious issues to work out.