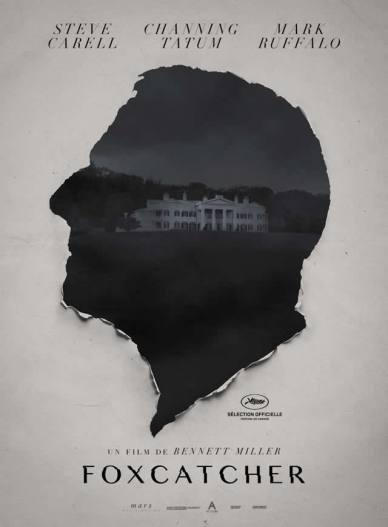 I’d been anticipating this film for a long while. Ever since I’d heard of Foxcatcher, there was something about it which struck me. Now, I’ve only seen Bennett Miller’s Capote, which I loved. I have yet to see Moneyball. Either way, this was something I was looking forward to because I love Mark Ruffalo, as well as Channing Tatum. Even more I was excited to see what Steve Carell would do – and after seeing the first images of him ages ago, I had a feeling this would be something special. In my mind, I was absolutely right. Miller does a great job, along with the spectacular performances rounding out the cast of the film.

Foxcatcher is based on the the story of John du Pont (Steve Carrell), member of one of the richest families in America, and the relationship he had with Olympic Medal winning brothers Mark and Dave Schultz (Channing Tatum & Mark Ruffalo respectively). Both men would come to be a part of Team Foxcatcher, led by the multimillionaire du Pont. Over time, it is increasingly clear du Pont is not a man in his right mind. While he at first appears to be just an eccentric, harmless man with too much money looking to finance a sports team, wrestling in particular, it is more and more obvious he will do anything to make sure his only legacy would not be tied up in that of his mother’s and horses. John and Mark become very close over their time together, almost like brothers themselves. When Dave refuses to be shut out of his brother’s life, du Pont becomes jealous of their bond, and the results are extremely unexpected by all involved. 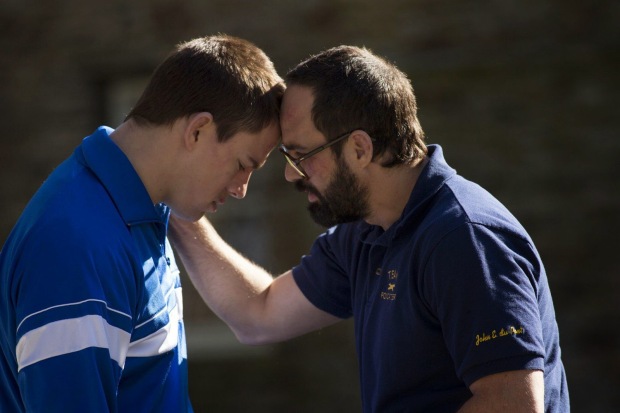 I think the style of Miller’s film really fits the overall subject matter. While I’m sure things were dramatized, as they always are with true stories because that’s how things go, the story of Mark and Dave Schultz’s relationship with John du Pont is a dark one anyways. The sort of grey, grim feel to a lot of the film is a really effective technique by Miller. Not that it’s revolutionary, I just think had he opted for a more bright look this would not have achieved the same effect as it does here with the grey and dull tones. The whole landscape of du Pont’s estate is shot to look almost foreboding and it’s like there is a constant fog at times just sitting over the grounds. Good choice between Bennett Miller and cinematographer Greig Fraser for the overall look. This works very well in conjunction with the editing, as well as the flow of the film. I love how things build up slowly. Once you get to the finale, things have really settled in, you feel comfortable, and even when you know it’s coming things really crash down on you – in the most perfect of ways.

Naturally, I was most interested in the acting above all else. First off – Steve Carell is really great here. Not only does he sort of resemble the actual person he is playing, I think he made John du Pont out to be a very sympathetic character at first. Then along the line, I’m not sure exactly where, Carell really gets into the darkness of du Pont. Of course, starting out I knew the story of the film, as do most who either like to research films based on true stories or get constantly bombarded with information in the digital age, as we all do, so really the fact that du Pont gets a bit creepy and all that didn’t really surprise me. However, the way Carell plays him is really wonderful. It’s a subtle performance. While the make-up is what a lot of people focus on, that big schnoz, it’s not the make-up which defines the performance. Carell does such a great job with all the mannerisms of this character. He really fell into playing du Pont, and I think this shouldn’t go unrecognized. It isn’t all hype. Carell gives an absolutely phenomenal performance. As someone who isn’t particularly his biggest fan, except for his breakout in The 40 Year Old Virgin, I really think this guy gave a pitch perfect effort in achieving the strange quality of this eerie real life man.

Channing Tatum was incredible. I couldn’t get over his performance. I’m actually a fan of his, but here he just goes beyond what I’d ever expected out of him as an actor. Physically, he embodies the role of a wrestler. Further than that, Tatum really gets into the skin of Mark Schultz. I know Schultz has problems with the film, as we’ve probably all seen in entertainment news over the past couple weeks. Regardless, I really felt for this guy. The way Tatum portrayed him was just so full of energy at times, and then others he dove deep into this dark despair. It’s a natural feeling performance from him. There’s one scene in particular that blew me away – Schultz has lost a wrestling match, and is particularly upset at himself, so he smashes a mirror with his head. I am not sure at all if this was real or if it was fake, but either way it comes off really wild, and highly intense. This is just part of what makes his performance an awesome one.

Another fabulous effort here is from Mark Ruffalo. His portrayal of Dave Schultz is also another great one. I usually enjoy Ruffalo, anyways. He is a solid performer. Particularly, I loved what he did in Zodiac; my favourite film with him in it. Here, he does a really great job especially when it comes to the relationship between him and Tatum. While their characters are brothers, they also have an even closer relationship – wrestling, being so physically close with someone, you develop almost a short-hand way of talking together. I thought the way in which Ruffalo and Tatum worked together, their chemistry, made things all the much better. Ruffalo even looked to have physically beefed up a bit. I have no doubt he and Tatum really trained a nice bit together because their relationship on-screen works so well. Awesome work.

I know some people have complained the film doesn’t really give us enough about ‘why’ du Pont essentially did what he did, but I don’t think it’s unclear whatsoever. The man was driven towards something foul. Not to excuse what he did, it is unspeakably horrible, however, I don’t think it’s as mystifying as people make it out to be. The film really shows John du Pont to be a man who craves companionship – not necessarily in a loving sense between two romantically involved people, but maybe in the way of male bonding. You can see in one scene, after Mark has brought him home a medal, he just wants to physically be a part of the gang – he wants to wrestle the guys he sponsors, hauling a couple of them to the ground in a grapple as they celebrate the recent win. It’s a bit of a weird scene, and I can understand how some might take it as something overtly homosexual, maybe as subtext – regardless, it isn’t mean as something like that. I don’t believe du Pont was attracted to the men on his team, or Mark, or Dave. None of that. I think du Pont was so smothered by the influence of his overbearing mother that he was reaching out, straining, just to find some kind of friendship, a close bond, with another man. In the end, this is what drives John to do what he did, and why he eventually came to resent Dave Schultz – because Dave and Mark had when John and Mark would never truly have. It’s twisted. Yet I believe this is his true pathology.

This is absolutely a 5-star film. A lot of times anticipation will kill a film for me, but when I was able to see Foxcatcher none of that happened. I got into the story so deeply. The whole movie really got to me, and moved me quite a bit. Each of the three central performances worked incredibly well towards complimenting the finished film.  I think the casting was spot on. These three guys were the reason this film essentially works. Coupled with the fact Bennett Miller has a lot of nice sensibilities as a director, these elements really make this one of the greater films from the past year. A fascinating, disturbing, intricate look at the lives of three men who came together tragically. Definitely worth seeing. I really hope Steve Carell gets his due here because this is not overhyped, he really is wonderful, as is everything else about this fantastic biographical drama. Enjoy.