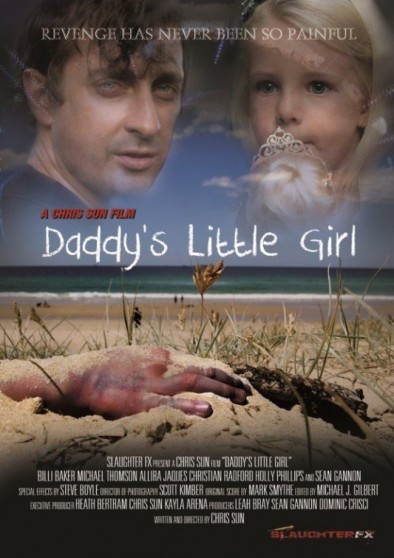 Daddy’s Little Girl doesn’t exactly tread any new ground in the revenge sub-genre of horror, however, it most certainly treads the waters well enough to be enjoyable.  At times the acting doesn’t particularly hold up to the standards it should in an effort to match the subject matter’s weight.  Aside from this, I enjoyed the film, and it was a little darker, a little more gritty than most by-the-numbers revenge thrillers out there.

This film tells us the story of Derek (Michael Thomson), a single dad whose daughter Georgia [Billi Baker] is forced to live in existence between him and her mother Stacey (Allira Jaques). Derek isn’t perfect; many times he drops his daughter into the lap of his brother Tommy (Christian Radford). One thing is for sure – Derek does care about his daughter.  One night, though, everything goes tragically wrong for both Derek & Stacey when Georgia seems to have gone missing. While the search begins for the little girl, it soon comes to an abrupt end when police find her dead and assaulted body on the beach. After trying to come to terms with Georgia’s death, Derek stumbles across evidence that leads him directly to her murderer. This sets him on a brutal, devastating, and revelatory path towards punishing the sick man who killed his daughter.

Totally agree with people who aren’t exactly thrilled with the acting. In the early portions of Daddy’s Little Girl, nobody was really knocking their role out of the park. Once things picked up, though, Michael Thomson really came into his own as Derek. In the beginning, his emotions seemed a little wooden, but the last hour he did good work. Especially once Derek tracks down his daughter’s killer – Thomson really gets into the character’s mindset.
Most of the other actors I was not really impressed with, at all.  I really thought Christian Radford, as Tommy, was rough – he never got any better [except maybe once his dialogue became less and less in the latter half of the movie].  It was painful.  As well as the fellow who played the character at the shop with Derek – I can’t remember the name.  He was especially bad.  There was maybe one moment of his entire screen time I thought he was all right, and that’s pushing it.  You’re really only going to get some decent acting from Thomson, and as I said, it takes a little bit of time for his chops to really shine. Eventually, they really do.

A lot of Daddy’s Little Girl rides on the horror aspect. The major portion of this movie, which is about the final fifty minutes, is really dedicated to the revenge portion of the plot. So, if Chris Sun had opted instead to go weak on the horror element of the film things could’ve really gone downhill. This is one of the strongest pieces. There’s one really brutal moment, almost a throwback to Misery, where Derek decides to redefine Georgia’s killer with a new walk – or maybe no walk at all – and you get one of the nastier leg breaking scenes I’ve witnessed in awhile. At the very least, you’ve got to give it to Sun for showing us some naughty, violent bits with a couple real worthy effects.
This also leads me to one of my other favourite aspects of Sun’s movie – the way Derek decided to go about learning his methods for torture were fresh, and a unique way of going about an all too familiar film plot. For instance, to figure out how one might remove a few teeth, or you know, something along those lines, Derek takes a trip to the dentist and slyly broaches the subject saying he’d seen a primitive tooth removal on the internet. All too often, these revenge thrillers fall into the traps of giving their audience the impression anyone wronged & out for revenge is an automatic CIA-trained interrogator, well-versed in many different methods of torture.
Here, Derek comes across as a very intelligent man who goes about things in an intelligent way, and yet he isn’t made out to be some all-knowing revenge seeker whose own lust for revenge somehow conjured up an inherent knowledge in all of us of how to torture and kill other people flawlessly. Sun includes some really great pieces leading up to Derek’s eventual trapping of the murderer – we see him casually draw out details he’ll later use to torture his daughter’s killer. It worked very well and was untypical of these types of films.

While not perfect by any means, Daddy’s Little Girl deserves a 3 out of 5 star rating. There are so many revenge thrillers out there, plenty which dive into horror, and many of those are not worth talking about.  Sun’s film tackles some heavy subject matter. Not only that, Sun chooses to go about things without feeling the necessity to make this a typical rape-revenge thriller where we’re forced to endure long scenes of explicit rape or sexual assault [just so you know I love the original The Last House on the Left but not so much a fan of the remake & other modern films that feel the need to follow its brutal-for-brutal-sake trend]. He could very well have opted to include some sick stuff, and yes there are other bits of sick stuff here just nothing sexual – instead, this goes for the gut in other ways.
There are excellently gory moments. Near the end particularly Sun did an amazing job with these nasty scenes. They fit, they looked good, and we weren’t forced to watch someone be sexually assaulted for the nasty actions of revenge to carry weight. The acting certainly could’ve been a lot better in places. Mostly, Michael Thomson did a good job with the character of Derek, and brought a more level-headed, realistic “father out for revenge” to life in Daddy’s Little Girl, as opposed to other similarly themed films.
Don’t go in expecting something altogether different – like I said, there are a lot of others out there like this one. This one is a better example, just not as great as it could have been. Highly recommend you at least give this a shot and keep an open mind – the bad acting does redeem itself later as Thomson pulls out the stops in the third act, and the gore won’t disappoint any horror hounds.