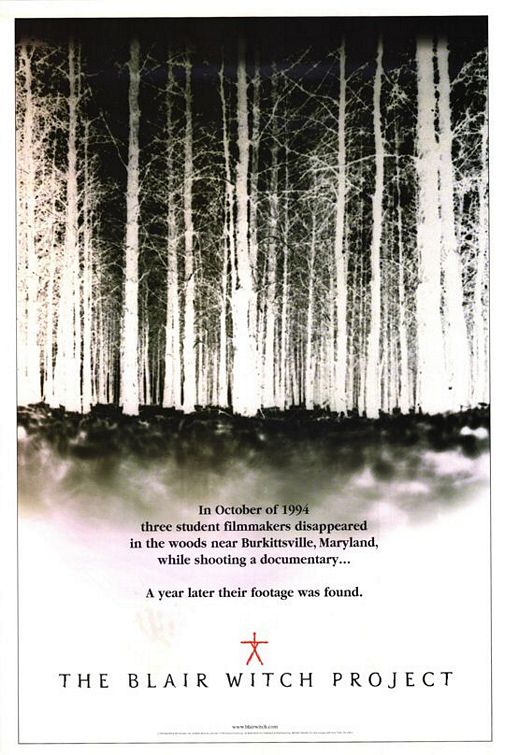 I don’t know how people my age look back on The Blair Witch Project now 16 years since it first hit theatres and completely scared the life out of, most, everyone. Personally, as a 14 year old kid when this came out, I remember begging mom and dad to get it for my birthday. Actually it would’ve been on my 14th birthday when I officially saw this film because I believe it was released in the summer of ’99; I turned 14 that October. So honestly, the first I ever saw this the finale especially frightened me to death. I couldn’t go to bed without thinking of someone standing in the corner, facing inward, I was always thinking of that haggard basement, wondering who or what was lurking around its corners. I mean, say what you want but I think this is still one of the best found footage horror movies that has ever come out.
Now, I will concede to some people who say that The Blair Witch Project capitalized on being the first big, mass marketed found footage horror movie. Of course along with that is going to come some part of its fame; whether fame or infamy, time tells. Before this there was the savage horror Cannibal Holocaust – a film so nasty, raw and real in 1980 that  Ruggero Deodato actually had to prove he didn’t kill the actors during its making. That I guess is technically the first found footage. There are others after it and before this one. For instance, 84C MoPic is a little independent fake documentary styled film about a missing during the Vietnam War. Then only a year before Blair Witch, there was The Last Broadcast, which could’ve been one of the top found footage films along with this, however, the climax/end completely ruined everything to come before it; unfortunately so, really disappointed me because I thought it was going to be incredible all around.
So The Blair Witch Project is not necessarily overly innovative in its usage of found footage. That being said, this movie benefited from the way it was filmed in that the actors basically were just given minimal script direction, then sent into the woods to be messed with by the film crew and directors. As well as the fact this film was marketed perfectly. Just as the internet took real life and became an entity of its own, sprouting into a near living, breathing thing – right before Facebook and everything else was poised to come alive too – The Blair Witch Project sucked people in with websites, marketing campaigns, and a realistic feel to the film, all combining to leave a huge impact on us culturally in terms of how horror movies would evolve; from how low budget filmmakers would go on to begin breaking into the business in a new way, to how many horror movies would come to be marketed by production companies for years and years to come. 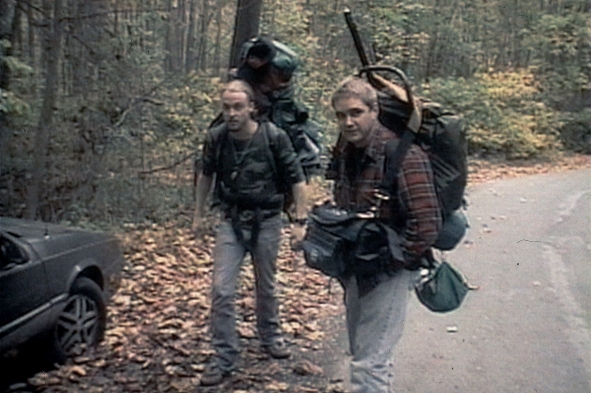 The film follows Heather Donahue, Michael C. Williams, and Joshua Leonard – three student filmmakers – who during 1994 head into the Black Hills surrounding Burkittsville in Maryland to do a documentary. Their subject is a legend around those parts concerning an entity supposedly named The Blair Witch. Stemming from local stories involving a frightening old woman, as well as a man who committed murder by offing numerous children, Heather and her two companions collect interviews and stories about events that may have involved the witch.
After Heather, Josh, and Michael go missing, their footage is discovered one year later. Once the footage rolls and it is all over, the viewer will be witness to what happened on their fateful trip into the woods. As the three friends walk further and further, it seems they can’t find a way out from the trees, only falling deeper and deeper into unknown territory. First, Josh goes missing when the other two wake and find him gone. Moving on without him, Heather and Michael are scared of what may have happened. Then one night there comes screams from the darkness: it’s Josh. His voice calls out for them, but they can’t figure where it’s coming from. What follows is pure terror. 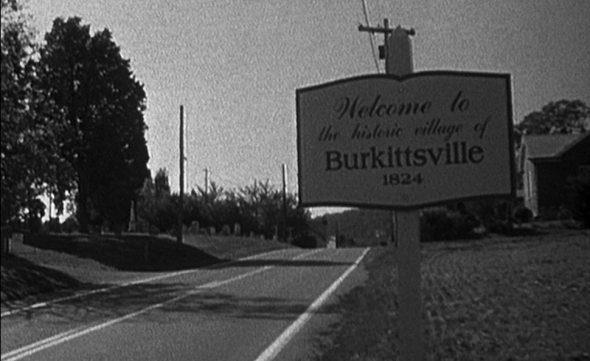 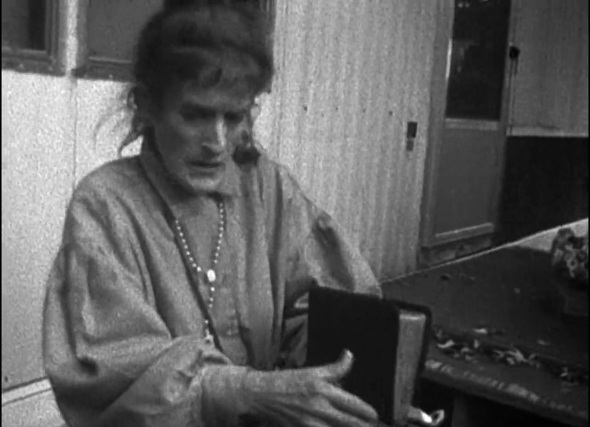 For me, ultimately, what I find so effectively scary about the film is that it does feel real. To me, anyways. I know it’s not, obviously. Man – if you can’t tell that, especially nowadays in 2015 onwards, then you ought to reevaluate how the hell you’re even watching films.
What’s most real to me are the relationships between Heather, Josh, and Michael. They’re three friends and they have a common bond, they want to go out and make a little documentary; they’re students and they want to do something artistic and fun and interesting and cool. I get that sense from them, as they go on the road, traipse through the woods. Then it’s clearly obvious when things start falling apart they’re friends, because friends always get so vicious and the like when friction like that happens between one another. It all comes full circle anyways, as Heather accepts the blame and gives her video confession. So I thought this was something that helped the film all around. Without a group of people who feel connected and who seem to have relationships – essentially without people who don’t feel REAL – then there’s no way for the suspense and tension of a found footage horror to play out properly. 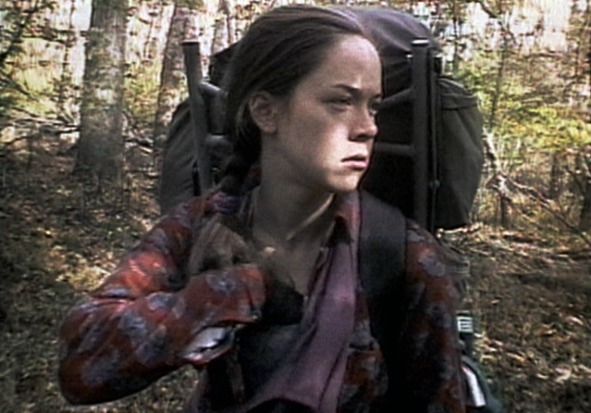 From the first time I ever saw this movie, right to now as I watch it again, the final scene kills me. When Heather and Michael head into the house, even the look of how rundown it is strikes me as creepy. Plus, there are all the handprints of children littered throughout; on the walls, everywhere. It’s definitely chilling. Not to mention you can hear the moans and cries of Josh somewhere within, but just like his two friends we’re lost and stumbling.
Right at the end, though, is where I’m always creeped out to the fullest lengths. We know about the story of the children being put in the corner, avoiding the eyes watching as he kills the other child – now Michael stands in the corner, facing in, as Heather approaches and then she also tips over, the camera falling and the screen going blurry. I’ve always thought that part came off highly unsettling. There’s some quiet and subdued in this part of the scene whereas before things get pretty chaotic. I like the little lull in pace and intensity as Heather and Michael enter the house and look around, just before the last punch of terror. It’s perfect, if you ask me. Quality ending. In fact, I’ve seen some say it was boring up until the final 10-15 minutes. Maybe to some, I just say the tension and suspense got treated correctly and built up in an appropriate way. Nowadays so many found footage horrors try and go for the jump scares when The Blair Witch Project uses virtually none – you might consider the final shot a jump, however, I don’t at all. Simply a jarring end. I like that this movie went for a slowburn approach. In my opinion it worked and continues to work on me today. 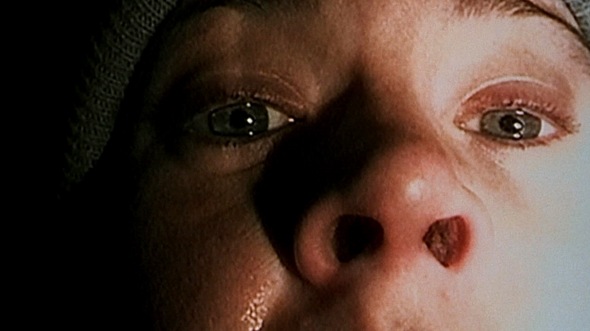 I’ve got to mention how awesome the production of the film is, in the sense that the actors were sent out into the woods and terrorized at points without really having full knowledge of exactly what was about to happen. I’m sure a ton of films have emulated it before in certain ways, and certainly plenty afterwards in their own right, but The Blair Witch Project is one of the first found footage movies to take that to another level. You can genuinely sense the fear in the actors at certain times as they’re careening through the woods, holding cameras, rattling at high speed while they push out into complete darkness with only the camera’s light to guide them. Honestly, if you can kid yourself into believing a ton of this is not real fear in their voices/faces/reactions, then you’re blind! I’m not saying every last bit is all natural, but you can bet your ass there is a good deal of the emotion in this film that came about honestly and in a genuine manner. That’s a big part of why this is such an enduring horror movie, and why it will always be touted as the forerunner of the found footage movement. Not because it was the very first – it was not at all – but merely because of the lasting impact it has had on audiences and the horror genre, as well as the way in which it was acted and filmed. 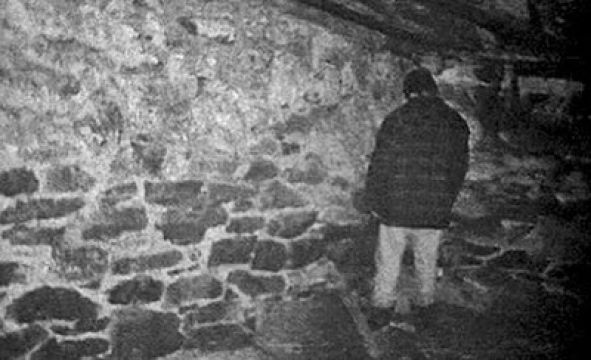 From the moment I’d stopped watching this movie for the very first time, after the credits rolled and I was fittingly terrified, I knew this was a 5 star film for me. Tonight, as I watched again and revelled in the perpetual terror of those last 15 minutes or more, I counted this again a perfect horror. Maybe it isn’t for others. Maybe some, or many, have gotten plenty sick of The Blair Witch Project by now at this juncture in the genre’s evolution. My opinion is that this will last the test of time, this is always going to scare me and it’s always going to scare a lot of people.
I wish that I could come back to The Blair Witch Project with fresh eyes for the first time, all over again. This is one movie I’ll never forget where I was when I’d seen it, how I felt, so therefore I can’t deny its personal impact on me. It’d be incredible to experience that sort of thing over again, anew once more. Either way, I still get that same old fright with each and every viewing. Of that, I can never ever complain.