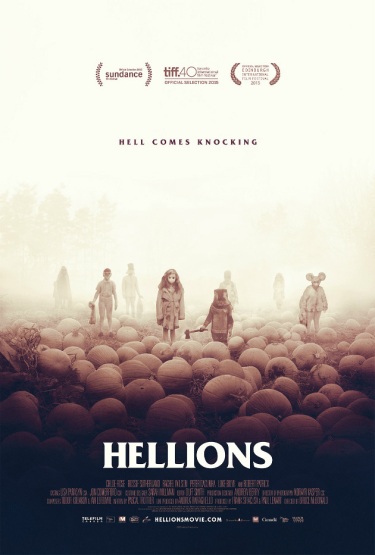 Bruce McDonald has always had my stamp of approval for Highway 61 and more importantly Hard Core Logo, a film which personally shaped me as a young teenage Canadian punk rocker (or wannabe anyways). Not only that, it set me off for years on the idea that a mockumentary didn’t have to be mocking anything; it could do plenty serious business while also having a comedic edge. Either way, McDonald has done some real good films, even Dance Me Outside a forgotten gem of Canadian film. 2008’s Pontypool was a refreshing swing (and a hit) at the zombie sub-genre of horror and another reason why I’m glad to see McDonald again veer into horror with this film.
Hellions is, to me, a surprising and in ways a refreshing horror movie. It’s not like other horror movies. I don’t mean it completely subverts the genre, or that it comes with an entirely new and innovative story, however – the way McDonald comes at his themes and the plot is both fun andinteresting. A solid dose of horror, disturbing and also straight up, as well as a refreshingly visual style and creepy atmosphere makes Hellions one of my favourite horror movies of the last 5 years at least.
I could care less what other people say in their reviews. This is mine and I’ll cry if I want to. Shit, that’s not right, is it? Well this is my review and I think I’ve at least got a couple things to say about McDonald’s film, in terms of its horror and often exciting visual experimentation.

17-year old Dora Vogel (Chloe Rose) has a pretty standard teenage life. Her mother Kate (Rachel Wilson) tries to keep life going steadily for them all, which includes little brother Remi (Peter DaCunha).
Unfortunately, Dora misses class one day visiting the doctor and discovers she’s pregnant. As Halloween has rolled around, she finds herself home alone with the news all to herself. Even more unfortunate, far worse for Dora, some trick-or-treaters come knocking while her mother takes Remi out to stockpile candy.
And these are no ordinary little kids in costumes. First it’s a little kid with a creepy bag over his head. Then comes a similar little child with a bucket over theirs instead of a bag. One of them reaches out with a demon-like hand, touching Dora’s belly and says “Mama“…
This begins the hellish Halloween of Dora Vogel.

One thing I loved about Hellions, when it kicks into full Hell Night mode, is how McDonald used the infrared camera. There’s this almost Alice In Wonderland feel, or Wizard of Oz maybe (Dora – Dorothy?), after you can see the infrared begin – a pink hue sets in over almost everything in the frame. This brings a strange quality to a lot of the visuals which McDonald goes for over the course of the film. While I can’t speak for others obviously, it was an intriguing effect to me. It’s not something I’d want to see a bunch of movies use, however, with Hellions I think there’s supernatural horror happening big time and we get this heightened sense of atmosphere with the infrared camera making the whites and the greens so vibrant, as everything stays washed in the pink tones. Great, great stuff. Particularly I couldn’t get enough of how the trees look; the rich greens against the sort of faded pink over everything and the bright white colours throughout, it really is beautiful to look at.

Along with the look this film boasts an awesome, haunting score from Todor Kobakov and Ian LeFeuvre. There are times it has an undeniably 1980s style synth sound. At other moments the film’s score has this throbbing ambient darkness about it, which sort of lays underneath particular scenes and holds the tension tight, as well as snaps it hard to make that tension pay off. Also, there are some great strings thrown in and a terrifying choir singing/child chants alongside to make one dreamy scene beyond unnerving, on top of everything else actually happening in the scene itself. Honestly there are horrors which are made or broken by scores; I personally think this one does Hellions more than enough justice.

Both Chloe Rose and Robert Patrick do a great job with their characters. It’s easy for actors to get lost, their performances I mean, when the visual aspect of a film is so evident and in your face (though I mean that not in a bad way at all obviously). Contrary to that, these two are able to lift their characters above that in order to make them noticeable. The kids are memorable mostly because of the creepiness, the horrific acts they perpetrate and the weirdness involved; these two are memorable without masks, solely based on performance.
Of course Patrick isn’t around as much as Rose, but still, he’s a fun character actor to see in a horror film. Particularly near the end Patrick makes his character really pop out and leaves his mark.
Rose does fantastic work here. She’s got a tough, complex role. On one hand, Dora Vogel is a young, seventeen-year old girl worried about being pregnant. On the other hand, she’s also got to deal with the onslaught of monstrous, demonic children at her door, trick or treating. There’s a lot going on and I think many young actresses might not do so well with the character. She gives us a good deal of range from start to finish. A real solid performance. 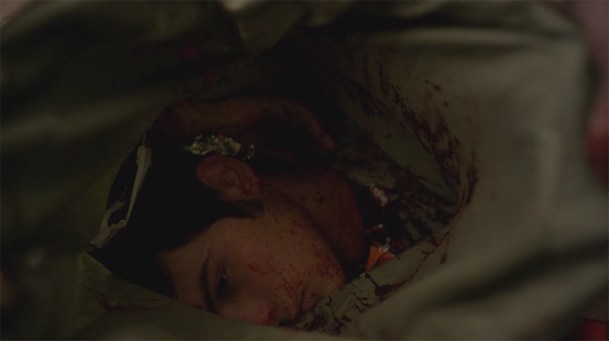 Let’s talk horror.
First, we’ve got little kids in some of the creepiest masks I’ve ever witnessed. They’re starting at the door, eventually working their way inside. They make strange noises. They’re actually… demons? Who knows for sure. They’re awful either way, in the best possible sense. Horrific little creatures of the Halloween night.
Secondly come the dream sequences, the trippy little bits. One moment sees Dora trapped in a small shed where blood pours from between her legs, quickly filling up the room around her, as she almost drowns in the reddish waves. Amazingly creepy! This was a brief yet nasty scene, effective definitely. There are bunches of wild imagery going on, what with the infrared camera being used as a real technique in McDonald’s vision, but this was one that stuck with me because I thought it was a knockout.
Also, when Dora sees herself eating a little fetus on the end of a fork – just like she’d earlier done with a pickle – and throwing a bit of salt on top, crunching its little head, I was like “WOW”. That is some gnarly stuff. What a ballsy thing to throw into the movie. Are some people really bent on thinking this movie is pro-life? I would say it’s more pro-choice than anything, especially with imagery like that; this isn’t an informercial about the supposed terror of abortion, which is fucking bullshit anyways, THIS IS A HORROR. McDonald knew what he was doing with this nasty image and it’s not throwing himself into the pro-life camp.

I totally understand why some people might not, and do not/will not, dig this film. That’s fine. Me, I think this could be considered a masterpiece of modern horror. When the final 20 minutes arrive, Hellions plays out like one of the most nightmarish things I’ve ever seen; a fever dream of insanity, dark visions, and body horror. Absolutely a 4.5 out of 5 star horror film. For me, anyways. I get it’s not everyone’s cup of tea. Though I’ve got to say, I can’t get over the visuals, the score, and the terror Bruce McDonald brought forward from Pascal Trottier’s screenplay.
Give this is a chance when you’re able to see it; out now on iTunes, if I’m not mistaken. I enjoyed the hell out of it. Can’t wait until this is out on Blu ray because I’ll be combing through it more and more, over and over. There’s plenty of symbolism and imagery throughout the entirety of the film. Maybe it isn’t as concrete and “normal” as some might have wanted it to be. At the very least you’ve got to give it to McDonald; this is one innovative, weird little horror flick.