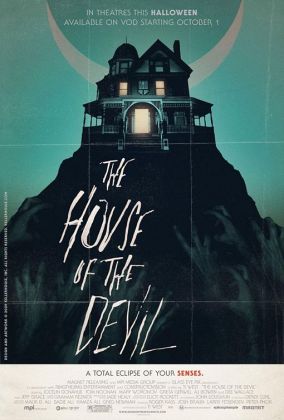 Ti West is one of the modern horror directors I think you could say is an auteur in his own right. All of his films have a similar feel, maybe all aside from The Sacrament, as in they’re all done on film (again aside from the aforementioned last of his films to come out), they have the full, rich look of movies from the 1970s and 1980s. Not only that, West is great at drawing out the tension of a film to create atmosphere and to setup excellent uses of suspense.
The House of the Devil is no exception. I’d actually seen this before any of his other work before, and loved it so much I went back to see anything else he’d done I could get my hands on. The Roost is a highly underrated indie horror gem, even Trigger Man – an early attempt at shooting digitally – has its merits. Since then he’s done The Sacrament, of which I’m a big fan, and another fun little spooky flick called The Innkeepers. Loves titles starting with The!
With this movie, West throws back to the ’70s/’80s Golden Age of Horror, not deliberately making a period piece but still harkening directly back to that time by use of similar techniques, camerawork, music, and aesthetic filmmakers were in the habit of using. Essentially, The House of the Devil ends up as West’s scary love letter to movies he grew up, the vibe of filmmaking happening at the time which influenced him, as well as he gives us a slow burn horror rooted in the false Satanic Panic especially prevalent during the 1980s. If you don’t like a slower paced film, this won’t be for you at all. If you don’t mind letting a horror build, letting it grow on you, then give it a shot; you will not regret it.

Trying to get out on her own, away from terrible roommate living, college student Samantha Hughes (Jocelin Donahue) ends up taking a mysterious job babysitting for Mr/Mrs. Ulman (Tom Noonan & Mary Woronov). Mysterious due to the fact the Ulmans don’t have a child. The job is, in reality, for Mrs. Ulman’s mother who lives with them. After some negotiating, Samantha gets a massive payday all for a single night. Her friend Megan (Greta Gerwig) tags along to make sure everything is fine, and though not entirely satisfied she leaves Samantha at the house, almost literally in the middle of nowhere with the Ulmans.
And once they leave, Samantha slowly begins to feel as if something isn’t quite right in the big old house. Not to mention a young man named Victor (AJ Bowen) blasts Megan’s face off just a little ways down the road.
Nobody ever told Samantha babysitting would could be so hard.

There are lots of things to admire about The House of the Devil. While big films often try to go for period looks – such as how Martin Scorsese for instance did the different portions of his Howard Hughes biopic The Aviator according to how films looked at various instances throughout the 20th century – it is’t often an independent movie, horror at that, will try and emulate the particular look of certain decades. West not only shot this on film, but 16mm film, which gives it a great look that was very popular in the 1980s. Other ways West achieves his retro feel is through the zooms, nowadays a technique you’ll mostly see done through use of a dolly shot. Even right at the beginning with the freeze frame on Samantha, music playing, movie title in big block letters; totally ’80s style, through and through. Down to the fact this was the only movie since A History of Violence in 2005 which got released on VHS in one of the clamshell style cases, this is a unique and fun indie horror. So there’s a quaint charm about West’s film I feel gets lost on a lot of people who don’t care about any of that. Should you care? Well, that’s totally subjective. Me, I think there’s a certain artistry involved with all the care that goes into making a movie into more than just a movie, but instead making it become an experience. The House of the Devil, for me, has always been a solid horror while also very much being a horrifying experience all around because of its style.

When Samantha puts her ear close to the door, asking if “everything’s all right in there”, the slow and brief reveal West gives us of the Satanic-like markings, the bloodied corpses on the floor is shocking. It’s not shocking like the scene is going to make you gasp, or lose your breath and hide away. This shot and the scene is shocking in that you’re not expecting such blatant nastiness right behind the door. Even how slow West shows us what’s in the room is incredible, as I was expecting something more along the lines of the ‘mother’ in the dark, looking sinister in the corner, or anything close to that. Instead, it’s a pretty ballsy visual, such that West announces at this moment things are definitely going to start getting savage. At some point, anyways. Afterwards there are more moments of horror later like this, and also some key shots of very dreamy imagery in certain scenes. Generally, West strikes a nice balance between these two methods.

When Samantha discovers the full extent of what’s happening in the house (think: drinking blood from a horned skull), the plot takes us into the depths of horror. Mixing subtle creepiness with plenty solid doses of nasty violence, the finale of the film plays out with pumping adrenaline in a sequence washed with blood. In particular, a few shots remind me of William Friedkin’s The Exorcist, almost homage-like cuts to a hooded demonic character much like how Friedkin made several subliminal cuts to the Pazuzu demon in his film.
Most of all, I found the atmosphere of the film combined with the characters pretty damn eerie. Such as the Ulman family themselves. First there’s Tom Noonan whose creepiness knows no bounds, never once calling back to his stint as The Tooth Fairy a.k.a Francis Dolarhyde in Michael Mann’s Manhunter, which is an unfair criticism of his acting I often see when he plays in horror movies; here, his character is all its own and he plays it quietly with great nuance. Then Mary Woronov does a spectacularly unsettling job with the character of Mrs. Ulman, even in the brief time she’s actually onscreen. Of course, Jocelin Donahue as Samantha is a perfect fit – she’s an ongoing yet at times quiet sort of person, but there’s a strength Donahue gives the character which is really great and adds something to the story. Throw in AJ Bowen and Greta Gerwig as interesting, smaller characters, and I’ve got to say West’s screenplay is a tight one with plenty of intrigue and none of the heavy, sagging exposition of other horror movies trying to spell every last thing out through dialogue.

This is a great film, 5 stars in my book. Ti West could’ve done a typical slasher with this, however, he opts to draw on his biggest influences from the ’70s/’80s and some of the real life yet fake claims of Satanic Ritual Abuse from decades ago, crafting a unique indie horror experience. Great and classic sensibilities show in the way West handles his directorial duties, as well as his writing. I can’t say anything else except for: watch it. Maybe you won’t dig it. But those who are into a slow burn, atmospheric type of horror, it’s full of that and it’s only a little over an hour.
Let me know what you think of the movie in the comments below, as long as you can be civil and have a proper talk!