This is a movie I’ve waited a long time to see. Ever since I even heard the name, it intrigued me. In fact, I believe writer-director S. Craig Zahler actually wrote the screenplay about 8 years ago or something crazy like that. So for those of us who follow projects from their early stages in development, this is one of those titles people like myself have eagerly awaited. Then, once Kurt Russell, Richard Jenkins, Patrick Wilson (and more) signed on, a year or more ago, the project had me beyond excited.
Westerns can be amazing, if treated properly. There are lots of them out there. Recently I discussed this very same thing while reviewing the Mads Mikkelsen-Jeffrey Dean Morgan Western The Salvation, a film I personally enjoyed. But so many sad, half-hearted Westerns come out, like horror. Part of why I loved Bone Tomahawk is in part because of the blend between horror and Western, two genres of which I’m a huge fan. I fell in love with horror through literature first, then film. Westerns I came to through my grandfather, whose membership to Columbia House and love for John Wayne/Gary Cooper shaped part of my early film viewing life. With a packed cast – including the god damn man Kurt Russell, the chameleon Richard Jenkins, and Patrick Wilson who has talent out the ass – Bone Tomahawk makes the most out of both its Western and horror elements, while not having to fall into every last trope from either genre.
It’s safe to say, this is another modern Western I’ll definitely be adding to my personal collection.

It’s hard to deny the nasty brutality of a movie like Bone Tomahawk. Particularly when the opening scene has David Arquette’s character cutting a man’s throat; not even efficiently, he slits once, slits another time. After all that, Buddy (Sid Haig) has to finish the man off, crushing his skull. The first two minutes set the tone perfectly. These two men are just killing and robbing, savagely murdering men for nothing more than some books, trinkets, who knows what else – nothing too great. Zahler conjures up a grim atmosphere immediately. Even in the sun baked landscapes Benji Bakshi (who also did the cinematography for the interesting indie Some Kind of Hate recently out) captures there is such an undeniable grimness, it lurks everywhere and casts over every little thing. Then there are the interiors, the Western sets captured in all their gorgeous grittiness.
The string score accompanying so many beautifully realized shots and sequences is fitting. One scene really catches me – as the group of four first depart, there’s a great shot of them all riding and the strings have such a heartbreaking feel. Seriously: this shot belongs in the hall of fame. I can’t shake it. Almost like it foreshadowed every bit of darkness and horror to follow later on, a foreboding moment in time. All the music is courtesy of multi-talented Zahler and Jeff Herriott, whose only feature film surprisingly is this one. Needless to say, they’ve done well. The music adds an extra layer to specific moments, which intensifies things perfectly when required; exactly what a proper score ought do.
Even further, I loved the set design itself, the look of everything. All the main characters were well costumed. I loved Matthew Fox and his get-up, especially one scene when he straightens himself out, putting on his cap then leaving the saloon; amazing. But just little things like the lamps in the bedrooms, the pictures on the walls, so many fine touches such as these made scenes eye-catching. Then the lighting, all around, is perfect. It’s easy for a Western to throw you off nowadays if modernity creeps in too much. Honestly, though, this movie does so well creating the late-1800s atmosphere – the low light of the lamps inside and out around the town, dust/sand battered windows, old bottles of medication and all the pictures, various items on the desks and bedside tables. Such good attention to detail.

I love the plot and story of Bone Tomahawk. It’s at times funny, not even darkly but just worthy of a chuckle. The characters are original without being forcibly quirky, also without falling too deep into Western cliche. Furthermore, there’s the aspect of the troglodytes; the fact Mrs. O’Dwyer (Lili Simmons) is the doctor and not as it usually is in the genre a man; Zahn McClarnon plays a Native man whose status among the town isn’t of the lower sort (he wears an awesome suit); and so much more. The dialogue doesn’t come off as someone trying hard to create a Western. Lots of Westerns do fail because their entire style is forced, it doesn’t feel or sound natural when the dialogue is spoken. Yet Zahler writes this well, he’s someone I’ve enjoyed before: Asylum Blackout, to my mind, was a lot of fun and a nice dose of solid horror. Apparently he does well writing about the turn of the century in America, the slow tail end of the Wild West, so it’s easy to see where his talent lies watching this film.
Big favourite of mine here, character-wise, is absolutely John Brooder, played so finely by Matthew Fox; his charm is undeniable, even at times when you’re unsure whether or not he’s being too brutal. The scene with his horse, you’ll know the one – among all the other viciousness of the movie, this actually gets to me emotionally. To see Brooder, uncaring about anyone else other than those around him to which he’s loyal, so upset over the horse is that from which Western heroes are made. And Brooder isn’t the only good character, he’s simply my personal pick. They’re all awesome. Kurt Russell and Patrick Wilson in their own respects are also serving the film well here. Wilson’s character is so sympathetic, to watch him try and make it over the rough terrain out to find his wife, all too often hobbling far behind his companions, it’s actually devastating at times. Russell is, as usual, a hard yet smart tough guy, and his facial hair is fucking out of this world. He plays the Wild West sheriff role with plenty of smirky goodness, as well as with the aforementioned tough exterior.
I’ve got to at least make small mention of Richard Jenkins. He gives an interesting performance as the dim-witted but staunchly loyal sidekick to Russell’s Sheriff Hunt. Even the voice Jenkins puts on, it’s much different from many of his other previous roles. Quality acting all around for this movie. 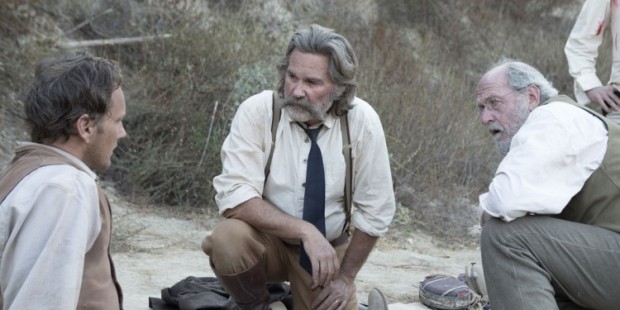 Sheriff Hunt: “What time is it?”
Chicory: “It’s about nine. But it feels like next week.”

On top of everything else I love so much here, the horror is supremely vicious. In the best sort of sense. Right off the bat with that scene including Haig and Arquette, there’s so much visceral horror happening. For a while, this stuff almost leaves your mind. There are a few ugly bits on the way to the last 40 minutes, such as Arthur O’Dwyer and his leg, the few shootings and a bit of stabbing. But it’s only once the four men on their journey come across the troglodytes and their cannibalism when things get awfully bloody, gory, and downright savage in its bestial nature. Great stuff, in terms of intense horror. Plus, it’s not a CGI-laden piece of work. Zahler doesn’t opt for a bunch of fake looking blood. Instead there’s a wealth of nice practical work here. Also consider that the movie’s budget is estimated under $2-million, so that’s actually truly impressive, like crazily impressive. When so many horrors, and lots of other genre films, fall into the trappings of computer generated boredom, there’s something to be said for a well crafted film crossing Westerns with horror that sticks to practicality.

Sheriff Hunt: “We’ll make sure all this has value”

5 star film. To the bone.
It’s not often these days with newer films, other than maybe a couple handfuls every year, I find myself glued to the screen. But finally having the chance to watch Bone Tomahawk, my attention was captivated from the opening sequence right to the final frames. There is everything here – the tried and true Western feel, a gritty sense of the Wild West, cannibalism, the at times scariness of horror movies, Richard Jenkins and Matthew Fox in finest form among a cast including other solid performances from Patrick Wilson and Kurt Russell. The adrenaline begins to flow full-on around when the last 43 minutes start descending upon you. Everything prior sets up all the atmosphere and tone necessary for the story to thrive. Everything that follows will keep you reeling, long after the credits roll. See this, or miss out on an innovative Western. Another I can easily say is one of the best in the genre I’ve seen over the past decade or more since the last big, great Westerns like Unforgiven and Tombstone.