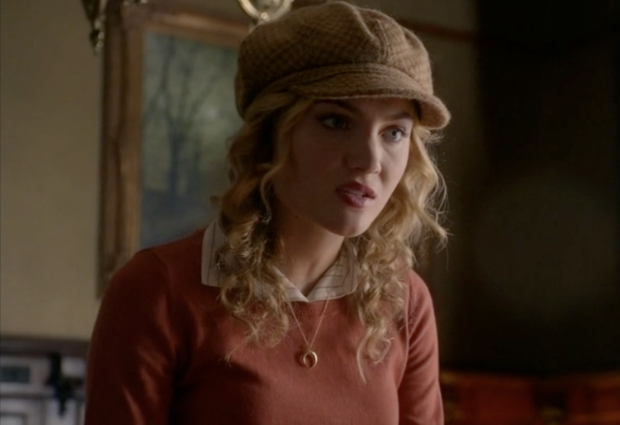 After a couple weeks hiatus, I’m catching up on Scream Queens.
Grace (Skyler Samuels) is now meeting with Dean Munsch (Jamie Lee Curtis). Munsch promised to tell Grace about the baby in the bathtub at Kappa House a couple decades ago. Though, the dean is convinced Feather is the Red Devil Killer. But Grace is smart, she isn’t letting any of this go because there’s obviously more to Munsch and her secrets than the older woman is revealing.
Afterwards, we get an amazing homage from Curtis to her mother Janet Leigh, via a Psycho-styled shower scene. I always love the homage Ryan Murphy and Brad Falchuk do with American Horror Story. Here, they get to do more, plus there’s Curtis herself with a personal link. Even further, The Red Devils show up. Munsch manages to down the first one, tricking him(or her) with the shower. Then comes a showdown with her and the other killer.
But OH SHIT! Up shows another Red Devil, even a person dressed like Antonin Scalia. She proceeds to reel off a story of a former lover, in a way only Curtis can. Before kicking Red Devil and Scalia ass, spouting off some things I’m sure many would love to say to Scalia. It’s almost a surreal scene in some ways. Chanel #1 (Emma Roberts) believes Zayday (Keke Palmer) is the killer, and the “walking jawline” Grace is helping. Esther believes “those who pill together kill together”, while Chanel #5 (Abigail Breslin) comes up with a ridiculous rearrangement of Zayday’s name as proof of a lust for murder. I can’t get enough of #1’s incredibly vicious talk. Reminds me absolutely of that silly sorority sister who wrote the vicious note people passed around online awhile back; Michael Shannon did a reading of it for Funny or Die. Either way, she’s hilarious and pulls the role off well.
Denise Hemphill (Niecy Nash) has a funny little exchange with my favourite Chanel, #3 (Billie Lourd). These two are awesome together, even if only for a minute or two in this early scene. They’re each quirky on their own ways. Furthermore, Denise takes her up on a sketchy offer to prove Zayday is the killer.

Denise: “Well what’chu mean by ridiculous? ‘Cause I can get pretty ridiculous.”

Dean Munsch talks a “hypothetical” circle around Grace, obviously only protecting herself above anyone on campus. She thinks “this school can survive a few serial killings”. She does not, however, believe they can go on without her. Typical narcissist. All she gives up is a name – Sophia Doyle. At the same time, Munsch brings out the point Grace is a bit narcissistic herself; she wants to solve the murders, sure, but above all else she’s so concerned there is a mystery in her past linking her to all this murder.
Jennifer (Breezy Eslin) is pissed over a mishap at a candle sale. She is beyond hilarious. Although, she tells Denise Hemphill about a story Zayday told her once concerning a want for revenge. But turns out, Zayday’s only in the bathroom. She heard it all. Even more hilarious!
Maybe worse for Zayday overall, one of the Red Devils shows up while Jennifer is recording a video for her candle blog. Bye, bye, candle girl. Stabbed to death, done. Chad Radwell (Glenn Powell) is trying to do the Night of a Thousand Compliments in a flashback, it’s a “work in progress” Chanel #1 says. I laughed so hard. Immediately following this crack-up, the girls and Denise find Jennifer, dead, posed on the table downstairs with candle wax all over her, lit wicks and all. Awesome and nasty little death pose.
Pete Martinez (Diego Boneta) is still trying to help Grace out. They’re still trying to figure out what the supposed Hag was doing, where she may have ended up. Back to the asylum they go asking the painting lady, from when Munsch was locked away, about the Hag of Shady Lane – she produces a couple pictures, suggesting Gigi Caldwell (Nasim Pedrad) as the one and only. Also, one of them suggests two babies, not just one.
Cut to Dean Munsch suspends all operations at the campus at a press conference. Then there’s a large ceremony celebrating Jennifer, a ton of candles lit underneath the big tree, everyone waving a candle in their hands.
But the Red Devils have won. The place is shut down, and none other than Chanel #1 is probably the most worried: about Zayday, about her popularity, and about Chad Radwell not wanting to bone her anymore.

Chanel #1: “First of all, I’m an American: I don’t have to understand anything.”

Grace confronts Gigi back at the Kappa kitchen. Cool as a cucumber, Gigi shrugs most of it off acting as if nothing at all is amiss. Moreover, she completely dismisses Grace, who’s really concerned about her father Wes (Oliver Hudson). Then Gigi reveals they’re supposedly engaged now, ring on her finger and the whole nine yards. Of course, we know the difference. We know Gigi is involved somehow, meeting with one of the Red Devils before.
Chanel #1 has a couple Scotland Yard Inspectors on the case trying to figure out what Zayday is up to. They find nothing, naturally. However, they’ve got some interesting information concerning Grace.
Then there’s Wes, who somehow fell into an engagement due to “mind-blowing sex”. He isn’t even really onboard with it all, mostly just a bit of a dumb man being led around by his dick. Worst of all, after Grace leaves he gives the mirror a terrifying look, which speaks volumes.
At Kappa House, Chanel #1 throws down information the Scots found out about Grace’s mother, right to Grace herself. Apparently the “Waterfalls is my jam” girl was Grace’s mom. Wes and Bethany met at Kappa the night of that big party all those years ago. Later on, Bethany went wild, drunk, and died in a car crash. Above the pain Grace feels, at least she’s not that baby in the bathtub.
There’s a big coup at Kappa, though. Mama Denise has declared her rule, even going so far as to say she’ll steal Chad out from under Chanel #1 (as you remember: they’ve banged). So I thought that was truly funny.

Finally the truth about Grace’s mom comes out from Wes himself. I still can’t tell what his deal is because there’s a dark streak in him. Regardless of whether or not he is an actual dangerous person, Red Devil, whatever, I still see the darkness in Wes. Plus, he was at the party that night. Could he have had a hand in something? Or is it merely a thin connection to the Kappa House tragedy?
There’s also the dynamic between Wes and Gigi. She is clearly involved with the Red Devils, so I doubt Wes is, too. What I’m interested in now is how Gigi is going to affect both Wes (Weston as she takes to calling him) and Grace. She’s trying to talk Wes into doing something drastic, possibly committing his daughter to an asylum. I hope this is not the case. Yet Gigi will go as far as she has to in order to cover her own secrets.
Chanel #1 actually empathizes with Grace, taking her out for a coffee date. She talks about her own horrible mother, how she’s a viciously atrocious woman. Great little flashback to a tiny Chanel, whose fashion was always impeccable. To see Chanel sort of apologize is impressive. She’s still got oblivion in her eyes, but I feel perhaps there’s a common bond forming, a light one, between the two. If only for Chanel to keep her enemy close. 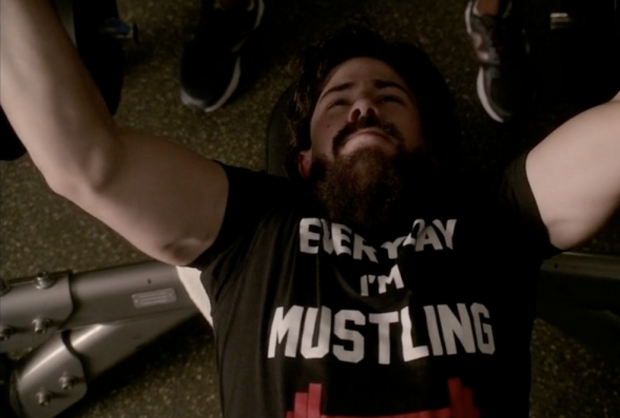 Then Boone (Nick Jonas) reappears at a gym, pounding the weights with an EVERYDAY I’M MUSTLING shirt. He says, “I can’t live like this – all I do is workout and kill people.” We’re getting more about what happened earlier: Gigi was the one who had the Scalia mask on earlier. Now, it seems the other Red Devils are about to take her out. Will they succeed? Or what will Gigi do now that she’s being threatened further?
Stay tuned with me for the next episode, “Ghost Stories”, also directed by Michael Uppendahl. See you soon!