Recently I saw The Hateful Eight. Taking a step back in time, in that same universe, I went back to Quentin Tarantino’s brutally honest, raw Western (or “Southern” as he likes to call it), Django Unchained. Sometimes I actually forget how good Tarantino is. To me, he’ll always be a truly great director. A master, in fact. My favourite film of his is still, and always will be, the adaptation of Elmore Leonard’s Rum Punch that Tarantino did, Jackie Brown.
But I do believe Django Unchained is one of his most impressive works out of the entire filmography. Let’s face it – there are rarely as interesting, influential and weird writers as Quentin out there. He brings that to the world of slavery and America in its former days, its worse days.
Editing by Fred Raskin, cinematography from D.P. Robert Richardson, practical effects courtesy of KNB wizards Howard Berger and Greg Nicotero (fucking legends), plus a load of other talented people, it all compounds to make Django Unchained into a great Western/Southern for the modern day confronting America’s historical race issues, specifically slavery, topped with the usual wit and style of Quentin Tarantino.

Down around Texas in 1858, a slave named Django (Jamie Foxx) is being transported, along with a bunch of others like himself. Soon enough, Dr. King Schultz (Christoph Waltz) shows up. He offers to buy Django, but things end up going bad. Schultz murders the men carrying the slaves, and then takes Django with him; now a free man.
With Django riding side by side with Schultz, they set out to find the Brittle brothers – whom the doctor seeks, being a bounty hunter and all. This is how Django purchases his freedom, tagging along to help track and kill a few wanted men. Perfect for the newly freed slave. He’ll have his revenge. Better yet, Schultz agrees to help Django track down and free his wife: Broomhilda von Shaft (Kerry Washington). Only problem is she belongs to the notorious slave owner Calvin J. Candie (Leonardo DiCaprio) at the Candyland Plantation. Encountering various wild and nefarious characters, Django and Schultz work their way towards Candie with death, madness and terrifying racism always nipping at their heels in an American Southern Hell.

One thing I love about this film is the fact it boasts an incredible amount of characters. Better yet, they’re Tarantino characters. Now, for those who do not like his style, or his characters, whatever – then they’re probably not for you in general. But I dig the way he gives us characters, often not diving too deep into their backstory – especially depending on if they’re big or small characters – which sort of intrigues me. Here, it’s not simply an ensemble cast, there really is almost an entire Southern U.S. filled with characters in Django Unchained. From Big Daddy (Don Johnson) and his nasty group of pre-Klu Klux Klan bagheads, to James Remar’s awesome Western-homage double character Ace Speck/Butch Pooch, to M.C Gainey as Bible thumping hypocrite Big John Brittle and Bruce Dern as Old Man Carrucan, to a Franco Nero cameo and a tiny appearance by Walton Goggins. So many different characters occupy the space of Django Unchained. And I know that all of Tarantino’s films are ensembles, there are often a bunch of characters. It feels to me, though, this one takes the cake. It doesn’t introduce too many either, not in the sense that too many are there to be touched on. Even Jonah Hill gets in a cameo with the bagheaded mob led by Big Daddy.
Best of all are the main cast. Foxx gives Django a ton of charisma, the likes of which no other actor could’ve given him. Hands down. Sure, maybe he wasn’t Tarantino’s first choice on the list. But he makes this film what it is, without him it doesn’t matter how well Walt dances over the wonderful screenplay. There’d be no movie without Django the character, and Foxx makes it worth every last second. From the first to the last, he gives it his all. Then alongside him, Waltz impressively characterizes an odd yet charming man in Schultz – both a bounty hunter and a gentleman, a liar and a straight shooter (in more than one sense of the term). No doubt he deserve his Academy Award. He also brings to life the other half of the film. Perhaps others could have played Schultz, though, I’m hard pressed to think of anyone whose abilities rise to the level of capability required to sell this character; Waltz has a hokey-ness about him that isn’t cheesy, it works so well, it makes Schultz who he needs to be, the perfect counterpart to Django.
I can’t not mention DiCaprio’s Calvin Candie and Stephen, played by the ever fabulous Samuel L. Jackson. They both give terrific performances in two very tough roles. Again, as I said recently while reviewing The Hateful Eight, as a white man I’ll never understand how it feels watching a film about race, especially slavery, and even more so considering this one is laced with the word “nigger”. Sadly, this is historically accurate, as the mid-1800’s were a viciously racist time in many parts of America. Candie is a savage representation of the young men who were brought up on plantations, raised into the family business of their fathers, the type of person who molds himself into the best possible version of a terrible person. DiCaprio performs this despicable man in the most terrific way possible, giving his all in a role that couldn’t have been easy. Likewise, though Jackson pulls off a magnificent performance it’s a sad character – Stephen has been bent and broken by white men, turned into a true slave, less free than any of the ones in shackles even while he roams free himself. It’s a wildly entertaining role, albeit tough to watch. Can’t imagine Jackson relished playing him, but in a way it had to be exciting, bringing to life an awful piece of history.
All these people together? How can you not find the cast beyond amazing? 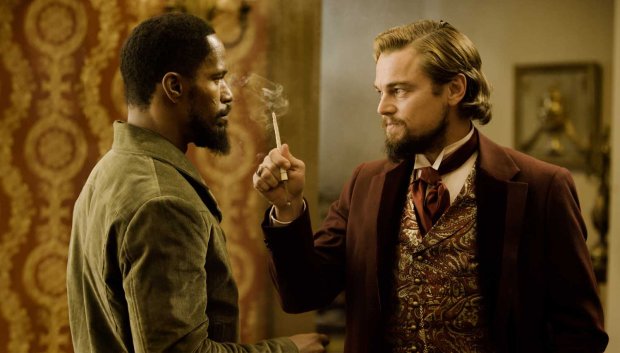 The conversation about Django Unchained is never complete without talking about aesthetics, from sound to cinematography to set design to effects. I won’t bore you too long. Although, certain names need mentioning.
In particular, there’s editor Fred Raskin. His other work as editor includes the recent (and fantastic) Western-horror Bone Tomahawk, Guardians of the Galaxy and others, plus he worked in various editorial positions on films like Tarantino’s Kill Bill films, Punch-Drunk Love, Christopher Nolan’s Insomnia remake, Hard Eight, Boogie Nights, and much more. His editing shows greatly in this one. There are times the way scenes are cut from one to the next are very Tarantino-esque, others it’s typical Western, and some are just odd; it all works. There’s a reason Raskin and Tarantino have worked together several times now. They compliment one another. Bad editing can really kill a movie, and fortunately this one is done well.
Another Tarantino regular, cinematographer Robert Richardson, makes the look of Django Unchained so slick and beautiful. Each sequence is almost done in its own style, but always captured crisply by Richardson. His eye brings to life all the colours of the South, the costumes and the set design all look so vivid under the care of Richardson as director of photography. Many great films have been captured under this guy’s lens from work by Scorsese to Stone. This is but one of those titles.

Full stop, a 5-star film. This is one of my favourites out of the Quentin Tarantino collection thus far, but still doesn’t top Jackie Brown for me. Either way, an amazing movie. It takes on a period of history many Americans would sooner forget. Instead, Tarantino’s whipsmart screenplay goes head-on at all the ugliness. At times it may be tough to digest. Although, the actors take each character and breathe into them a wild amount of life. Everything here is working on all cylinders, from the writing to the acting, to the wonderful aesthetics brought out by all the artists on the production. I cannot recommend this enough. To the naysayers: let them keep naysaying. This is a destined-to-be classic in the Western genre, though it takes place in the South. I’ll always love this movie. When it first came out I saw it several times in the first couple weeks. Can never get enough of Tarantino.