As a lover of film I try to seek out any and all directors, writers, actors, no matter where they’re from. I pity those who won’t watch foreign language films outside what they speak because the world has so many amazing talents to offer. Other than Possession, I’ve only ever seen Andrzej Żuławski’s The Third Part of the Night. (Update: I’ve seen several of his films since writing this; Diabel is my favourite so far.) Żuławski is a director-writer with a unique style, an artist capable of covering a wide array of topics in his career.
Possession is a hypnotic and frightening portrait of existential madness. It shows us the two sides of a marriage falling apart – the one person hooked on an unhealthy obsession and drifting away, while the other crumbles with jealousy. Filled with unnatural images, and equally littered with the honest portrayal of a marriage falling apart due to secrecy and hidden urges, Żuławski makes a movie that will linger in your blood. No matter whether you like the film, whether you despise it with everything in your being, Possession will mark you forever. 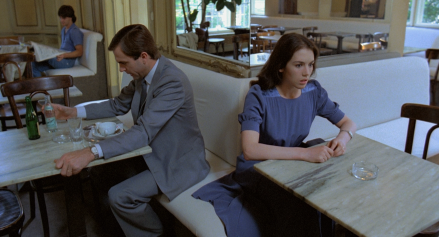 When Mark (Sam Neill) comes home from a secretive spy mission, he discovers his wife Anna (Isabelle Adjani) wants to divorce. He loves her, but agrees to give their flat over to her, as well as custody of their little boy Bob. However, on his own Mark obsesses over Anna and descends into a depressing pit of madness. One day he goes to see Anna, but Bob is alone, and has been for a while; mommy didn’t come back.
Soon Mark discovers Anna has a lover named Heinrich (Heinz Bennent) and it certainly complicates things.
But this is only the beginning. When Mark starts to have Anna followed by a P.I. the situation becomes incredibly strange, equally terrifying. Because Anna is stepping out on both Mark and Heinrich. She has another lover whose needs require everything of Anna. Even if those needs mean murder. 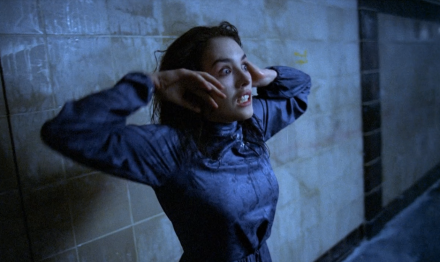 Before any of the horror aspects truly come into play, and even afterwards, Possession is first and foremost a movie concerning the themes of jealousy, and clearly possession in terms of being with a person and feeling as if we own them, or a part of them. Mark and Anna are a married couple that comes apart at the seams. Almost immediately are we thrown into the desperate mentality of Mark particularly, as we watch him sweat out his addiction (literally) to his wife. But it’s more than to his wife, Mark acts, most of the time, like Anna is his possession.
So his addiction is this owning, or the thought of owning his partner. Although, slowly Mark comes to understand how we cannot own a person. First, he hopes through love to understand it, but Anna prevents him from knowing the full truth. So he can’t find satisfaction through it this way. When he meets Bob’s teacher, the doppelganger of his wife, he slowly comes to realise that possessing a person is no longer so easy, especially when a literal double is out there walking around. But it’s not until he sees the hideous result of possession in the apartment where Anna’s spending her time that the effects and the consequences are so nasty.

Anna is one of the most confusing, disturbing, and complex characters on film. At the same time, Mark is equally complex. Their situations are incredibly intense.
For Anna, she has this repressed emotion and desire inside her. Unlike a man, she’s held back, required to play a certain part of mother, wife, dutiful in all her roles. So when the repression finally lets loose it manifests itself in a horrific manner. Then there’s the fact all these men die, as they’re the ones who judge Anna, they follow her and oppress her desire, they hold her back from what she wants to do. Their deaths are brought about by the systematic oppression of feminine desire.
And everyone’s surprised then when they find this sinister, growing mass of blood and flesh growing in the apartment where Anna goes by herself frequently. This thing is her creation, as it’s the only thing that lets her display her most base of urges, her uninhibited sexuality. What it becomes in the end is ironic, considering Mark and the creation of his own.
Parallel from Anna attempting to create a proper lover, Mark’s desire shows in the doppelganger of his wife. The teacher Helen (also played by Adjani) is the exact replica of his wife. In opposition to Anna and her repressed desires making a monstrosity of her wants, Mark’s Helen is normal – she is sensible and a sweet, gentle woman. As if exactly everything which Mark wants from Anna, who he wishes she was in another woman entirely. Better yet, we never see Anna or Helen together whatsoever suggesting they are two manifestations of Mark’s ideals. He is just as much at fault as Anna for creating the monster of jealousy and repression that comes alive in that apartment.
I don’t pretend to know what all of these things together mean, considering the ending of the film. There’s no doubt some political themes lurking in Żuławski’s writing. The setting of Berlin is interesting, as it brings up the idea of the Berlin Wall, the division, oppression, repression. You take that, mix it with the fact Mark is a spy of some sort and then there’s the doppelgangers of him and his wife. Hard to say exactly what Żuławski gets at with all these elements. But rather than creating a mess of confusing ideas and conflicting messages, Possession is a perfect balance of beauty and disturbing oddities. It’s rich in thematic pleasure while also being incredibly uncomfortable, all at the same time.

The cinematography of Possession is wonderful for such a grim, macabre bit of film. Definitely a favourite of mine in terms of its look and feel from the 1980s. There are too many beautiful shots to name. Every inch of the film is darkened, even the exteriors of the daytime set against Berlin look shadowy, and each location feels foreboding. This feeling is epitomised by the secretive apartment of Anna’s monstrous lover, which lies cloaked in darkness, the air almost thick with a dusky fog.
But then you add to the atmosphere of the cinematography all those wonderful practical makeup effects, the weird thing in the apartment itself, and Possession takes on the qualities of those best horrors out there vying for a visceral reaction. Worse and worse, the monster becomes this large, slug-like humanoid with a long tentacled, phallic organ. And the effects are impressive, the thing looks as if it might crawl right up off the screen. This movie drives at the heart, using both emotional attachment to the characters and their situation, as well as gruesome effects.
I won’t ever be the same after seeing Żuławski’s Possession. It’s one of my favourite films out there, yet I can only watch it maybe once a year. Twice, some years. Because it is a devastating piece of cinema, in many ways. Despite its viciousness and raw, open honesty, this is a work of art, a veritable masterpiece. And I’ll defend it until I die.