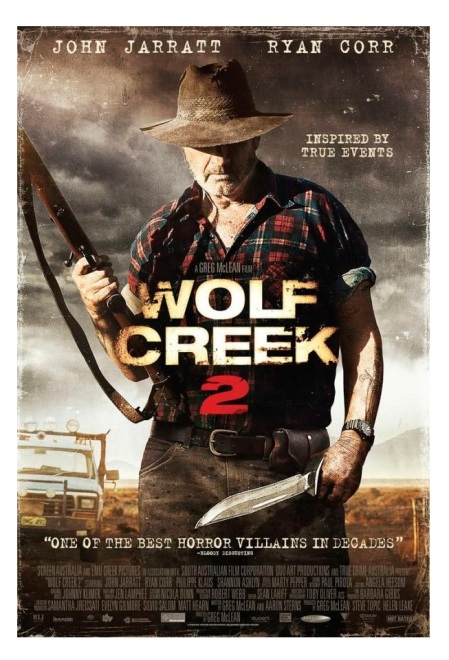 The first Wolf Creek came as a surprise to me being both fully fictional, as well as at the same time being partly inspired by real life Australian serial killer Ivan Milat. With the original’s ending, the news of a sequel was not surprising. However, I worried going in that director-writer Greg McLean, this time joined in writing duties by Aaron Sterns, might simply rehash all the same elements. It’s easy for horror sequels to fall by the wayside, either not exciting enough to match its original or too much of the same thing, or any number of problems.
Wolf Creek 2 is a fun little sequel. Because whereas it does go through many similar motions as the first film, there’s also enough differences to make it fresh, to make it intriguing, and most of all it keeps the character of Mick Taylor going strong. Definitely slightly more gruesome than the original, too. So even if there are times you might find yourself feeling like McLean is beating a dead horse, wait a few seconds. Either the renewed brutality of killer Mick will hook you, or perhaps the plight of a new victim might do the trick.

On the Australian highway, deep in the Outback, a young German couple are hitchhiking their way through the barren landscapes. When they get to the Wolf Creek National Park, the couple camp for the night. But later, Mick Taylor (John Jarratt) shows up. He seems friendly, advising the couple they ought to get moving, as there’s no camping in the national park. Quickly one thing becomes another, and eventually Mick’s killing again.
Afterwards, one of them manages to get away. And in the process, a young British man named Paul Hammersmith (Ryan Corr) becomes entangled with the mad Aussie serial killer. When Mick gets Paul back to his isolated camp, he wants to play a game. So he begins asking Paul some trivia; 10 questions, 5 right answers, then Mick will let him go.
Only problem? Every wrong question Paul gets one of his fingers ground off down to the bone.

Part of Wolf Creek 2 is very much a chase movie, or the first three quarters of the film is an extended chase sequence. What I enjoy most is that we start off immediately with Mick this time, as opposed to the first movie that stays with the eventual victims for a long time; which is great for that one. Here, we’re starting to delve further into Mick. There’s no massive exposition about his life or his character, but just starting off in his perspective, seeing what he’s up to, it pulls us into his world. Then there’s a shift, and we head to the German tourists. Finally, the lead protagonist Paul ends up in the mix after he sort of winds up in the middle of one of the Germans being hunted by Mick. A stroke of bad luck takes us from one set of characters to a new one. I love when screenplays can sort of psych us out that way, making you feel we’re about to spend a good deal of time with certain characters before pulling the rug out from under our feet. Impressively, McLean and Sterns also setup Paul’s character fairly quick, and that cuts down on any interruptions. The pacing stays tight, tense, and the story moves along without getting held up.
A majorly interesting bit in the film, which is the real meat of it and still doesn’t come until the last quarter, is when Mick has Paul back at his camp. The fact it’s Australia v. Britain here is super interesting, even more so when Mick asks questions for his game about when British convicts were first sent over to Australia, et cetera. You can really feel all the animosity Mick has towards the British. That’s clear right away when he constantly calls Paul a “Pommy cunt” and other variations of the word. But as the scene wears on, you can feel his hate of the British come out. When you parallel that with the way he talked to the German couple, it’s so evident he has got a beef. Perhaps, as a criminal and serial killer, he feels especially sensitive, as he would’ve been shipped over there had he been kicking around England at the time. 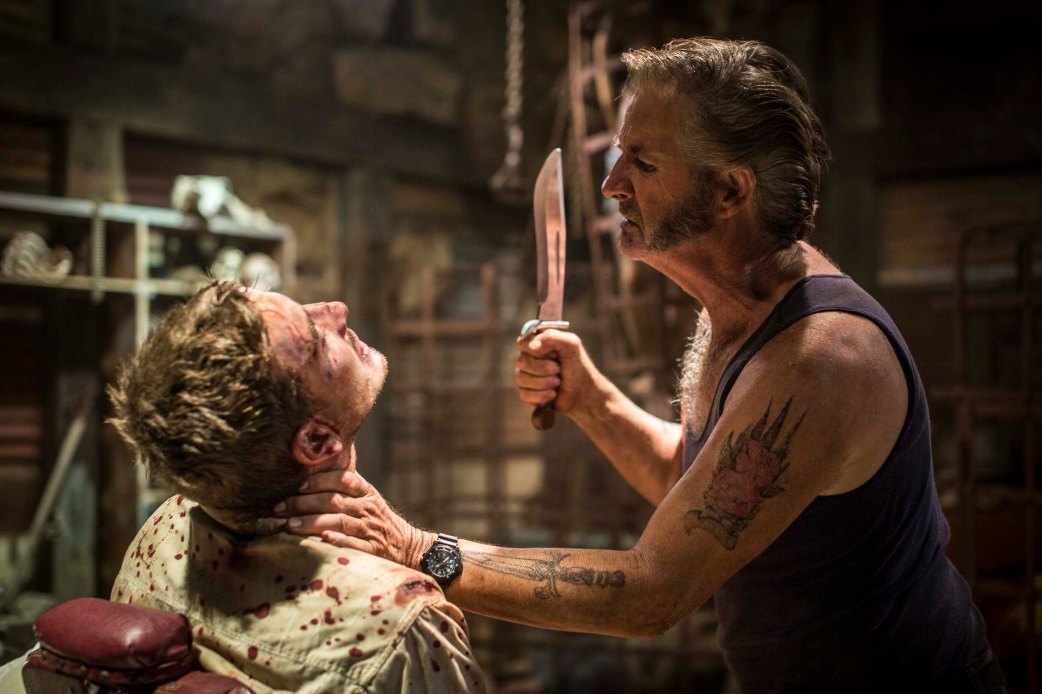 John Jarratt will likely forever be remembered most for his portrayal of Mick Taylor. Simply because it’s a real transformation. You see Jarratt in interviews, special features, making-of featurettes, and he is this sort of quiet, subdued type of man. Then he’ll toss in his Mick laugh, and you can see such a contrast between who he is and where he has to take himself to play the role. He is charming at times, even when he’s busy psychotic. Above all, he is intimidating. He is a tough, powerful, evil man as Mick. Often times in slashers it’s either a masked villain, or someone whose identity is kept secret for a portion of the film. Here, and even in the first, he is out in the open, he is hunting, and there’s nowhere to hide from the guy. He commands your fear. One of my favourite moments in this sequel, which is also sort of funny at the same time, is when Paul makes off down the corridors of Mick’s tunnels, and Mick yells out “You Pommy cuuuuunt” and lingers hard on the last word. While it definitely makes me chuckle a little, it is simultaneously terrifying. The anger in him simmers below the surface almost constantly, and in moments like this it breaks out, almost shaking the frame. Without Jarratt, Wolf Creek and its sequel would be nothing. Wolf Creek 2 is as good as its predecessor, simply because Jarratt gives us more of the character, he lets us have more of the character and more of his horror; he is the horror. 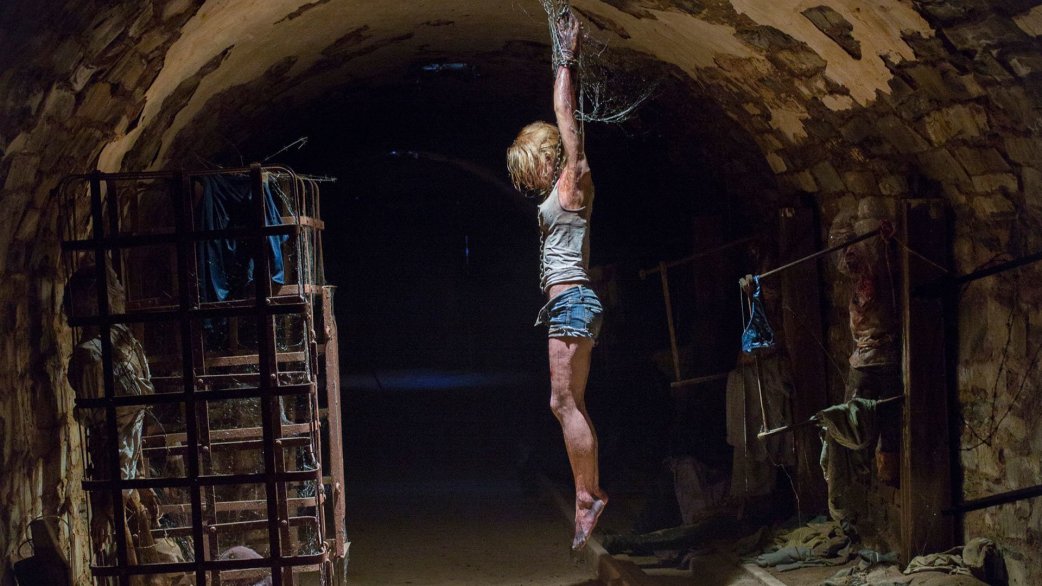 This is a pretty solid horror sequel; a 4-star bit of slasher cinema. There are many macabre bits to Wolf Creek 2 and though some say the first is more vicious, this one to me is far more brutal than the original. We get a deeper look at the camp of Mick Taylor, the tunnels below, the vast playground of terror where he operates. The first was properly chilling. This one ups the chill a few notches. And when the finale plays out, you won’t necessarily find yourself rolling your eyes like so many other sequels where the villain is stretched on and on, thin to the point of falling apart. No, instead you’ll be wondering what exactly Mick will bring in the inevitable Wolf Creek 3. I’m hoping the third, or the upcoming television mini-series, will dive into some prequel aspects to the story, as well as Mick himself. Being based on Ivan Milat fairly heavily, I’d like to think Greg McLean plans on examining some of what led to Mick as a character becoming as evil as he is now. Either way, this is a solid little flick and worth your time. Big bonus if you find Jarratt scarily entertaining as this bound to be classic horror villain.