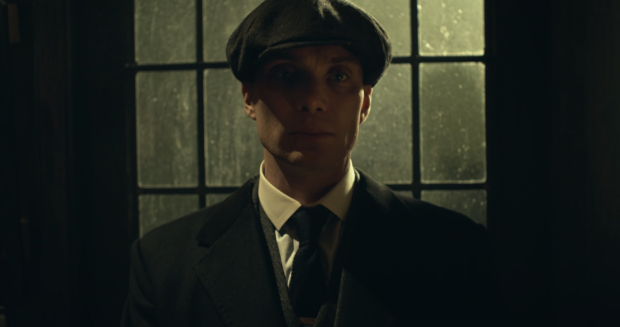 After a whopper of a premiere, Season 3 keeps on ramblin’. Tommy Shelby (Cillian Murphy) is out taking meetings. He’s talking with Connor Nutley (Ralph Ineson) about a little business. He needs some keys, evidently to some storage. But you know it’s more than for a place to store a few things. Either way, it appears Nutley is reluctant to take money from a Shelby, Tommy specifically. He takes it, though.
And a little later, he ends up speaking to Father John Hughes (Paddy Considine), as the two sit and have a smoke. They talk of choosing sides, so on. And without a whole lot of effort, Considine makes Father Hughes and his talk of “little creatures” into an eerie sort of chap. I’m a fan of his for a long time now, but this is immediately an effective performance. Interested to see where this relationship goes from here. Hughes is a crooked priest with irons in the criminal fire, so there’s no doubt a further end to having a great actor like Considine playing the part. The tension between Hughes and Tommy is excellent, too. 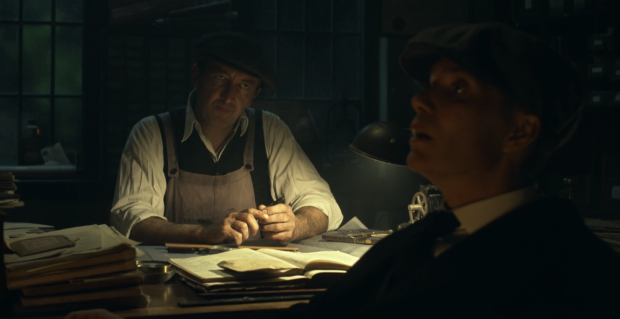 Now I’m blown away. Because an excellent actor I didn’t realize was part of this season shows up – Jan Bijvoet, as Grand Duke Leon Petrovna. This character is also quickly intriguing. Seems things aren’t as lively in terms of social engagements and business asthe Duke had hoped. He’ll be an interesting addition to the cast, as well.
Arthur Shelby (Paul Anderson) and brother John (Joe Cole) are sitting for a meeting of their own. However, not everybody’s too happy living under the rule of Shelbys like Arthur and John. As much as Tommy can get psycho when needed, Arthur and John are most certainly a little less subtle, and perhaps a little less respectful, than their brother. Vicente Changretta (Kenneth Colley) ends up literally spitting at them, making clear they’ve gone too far this time. Nice tense scene that’s sure to bring about a little trouble.
I’m always interested in what Aunt Polly (Helen McCrory) is up to. Because as greasy as she can be like any of them, Polly doesn’t get enough credit. They often walk all over here. But then again, none of them are saints, so what does it matter? Regardless, she doesn’t back down, and always gets her two cents in. Despite getting ignored or flat out mistreated, Polly manages a degree of strength in her male Shelby dominated world. Except right now all she manages to do is rile up her son John over Lizzie and her messed up situation.

Meanwhile, Tommy is making sure he’s on the special list at a swanky hotel. He’s dining and chatting with the Grand Duke Petrovna, who for his part is a bit of a disgusting man eating and drinking and talking in unison. Petrovna makes a bit of a dirty remark about Russian women v. English women, one which doesn’t appear to strike Tommy as very funny. But they get on talking. The conversation has its… ups and downs, including the Grand Duke crushing a glass in his hand, so obviously stressed yet completely composed at once. Another really impressive scene, both in writing and in the execution of the actors. Of course we find out more about what happened in the first episode of the season, re: the killing of the supposed Russian. Now, there’s further business ahead for the Russians and Shelbys. Serious business at that.
And John, he’s busy kicking the shit out of people. That’s one thing that constantly drives the fear of the Shelbys is that they’re very up close and personal fighters. Yes, they use weapons, guns sometimes. But they’re mostly brawlers. This is part of why many fear them. They don’t have to resort to guns in the night, or at least not all the time. These are blokes that’ll take you on, head to head.
When the Shelby brothers come together, along with Aunt Pol, there’s problems over John’s actions. He listened to nobody, and now there’s hell to pay. All the same, Tommy will have nothing but solidarity. It’s his way, or the fucking highway. 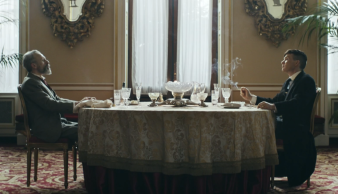 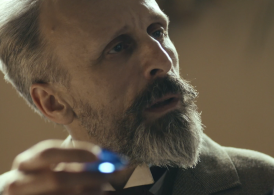 The Grand Duke sees his Grand Duchess Izabella (Dina Korzun). This reveals the fact they’ve likely got sinister intentions within their dealing with the Shelbys. She says it’s possible he may have to kill Tommy, with his own hand. Something the Duke is apparently ready for, one way or another. But is he? Without the possibility of death, any show’s characters become stagnant. So while Tommy is strong, all powerful with a wide reach, there is always a possible murder lurking around the corner, an assassination close behind or being brewed in the dark corners of Birmingham, maybe even further than that. Yet what I know for sure is there’s a nice showdown coming for the Petrovna and Tommy.
At the same time, Tommy is giving his wife Grace (Annabelle Wallis) the sapphire Petrovna gifted him for the murder of the Russian (spy) from last episode. And he’s got so much to worry about now with a wife, the child, it’s more to be used against him. Aside from that there’s Arthur trying to fight his demons, aided by his overbearing wife Linda (Kate Phillips). It’s only a matter of time before something in the Shelby clan breaks, snapping like a twig. Violently, I would imagine.
More Radiohead in this episode with “I Might Be Wrong”, a personal favourite of mine out of their catalogue. We see Arthur out on “business” as he tells his wife. But really it’s shit kicking time. So put on your shit kickers. Although, give it to Arthur: he goes home like he said he would. Even if his brother isn’t happy. 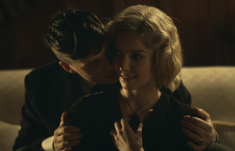 Tommy gets scooped up by the coppers. Then up shows creepy Father Hughes with an equally unsettling dog to see Mr. Shelby in his cell. The priest brings news about having Scotland Yard in their pocket. Veiled and open threats at once. Except Tommy is a hard bastard. A fighter to the bone. The two stand toe to toe, might as well be butting heads. Still, there’s a scary element to Father Hughes: “We can reach anyone. Anywhere.” And this puts a proper spook into Tommy, who rushes home to find a further threat. Proving that Hughes and his people really can get to anybody. A highly unsettling moment. Both in its own right, as well as for the fact Tommy is such a powerful man and someone can still go above and beyond his grasp.
As things go on of which she has no idea, Polly is ready to be painted soon by Ruben Oliver (Alexander Siddig). These two are fast becoming a little romantic. Wonder how far that will go, or what more trouble that might get Aunt Pol into with her boys. Because you know there’s only so far happiness goes for her. Mostly it’s a bleak and dreary ride through life for her among the Shelby clan. “A woman of substance and class,” she repeats to herself in the mirror before a party, the words Oliver had said about her earlier.
And at the party, Tommy’s not pleased to see Father Hughes, along with MP Patrick Jarvis (Alex Macqueen). In the dark behind closed doors, the three meet, and Tommy smokes his way through another tense encounter. They discuss an upcoming job, a bit of business. And Tommy really has no time for anybody else’s shit. The MP and the priest have their own ideas about how things will go. Even with the force of their power against him, Tommy will not lie down and take it for anyone. 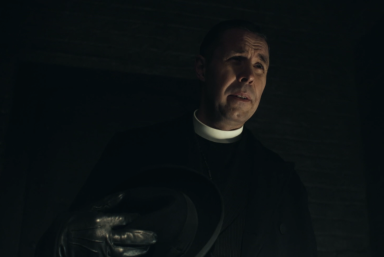 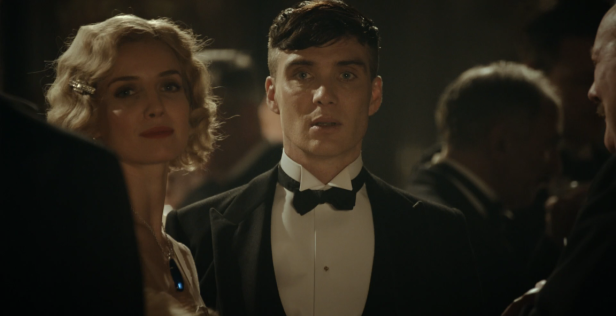 Tommy: “You know gentlemen there is hell, and there is another place below hell. I will remember everything, and forgive nothing.”

Tommy doesn’t want to bring Princess Tatiana Petrovna (Gaite Jansen) through for a factory tour while the place is being watched. Also, Princess Tatiana is a bit of a bitch. She even goes so far as to play on the whole gypsy angle, saying the sapphire from the Grand Duke has been cursed by one. So Tommy rushes to his wife, asking her to take the thing off.
But it’s too late. A man barges in through the crowd and takes a shot at the happy couple, hitting Grace right in the chest above her heart. As Tommy holds his bleeding wife, the other Shelbys beat the shooter, likely to death. 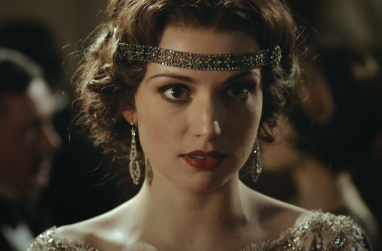 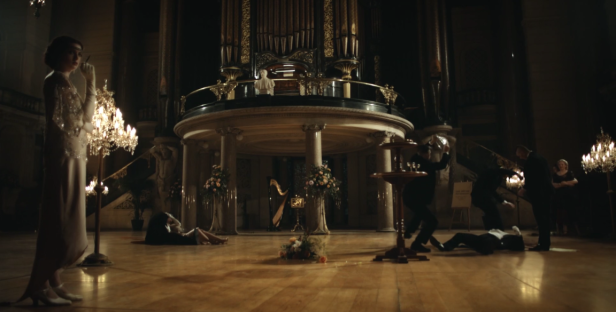 What a finish! Christ. I am sweating. Looking forward to the next episode, which will undoubtedly bring a ton of exciting developments. Much trouble on the way between the Irish and the Russians. Plus, plenty more amazing cinematography, acting, and lots of fun music. Stay tuned with me.