Back in jail, Hood (Antony Starr) sits with a psychiatrist. Not saying much, but rather sitting there simply to get on towards parole. He ends up sort of picking her apart. We start to get the feeling Hood has either been formally trained, somehow, or else has a natural gift for psychology. An observant man. A thief. An inmate. We also figure out no matter where he is, where he goes, what he does, the guy’s got a unique talent for drawing women towards him.

Cut to the end of last episode. Hood hears the cocking of guns behind him, outside the Cadi. Rounds and rounds empty into the building. Hood ducks and covers, much as he can. The place is near decimated and he finds himself backed into a corner, glass raining down upon him. That is, until he hears other bullets. Bodies nearby dropping. And out comes the cavalry: Kai Proctor (Ulrich Thomsen) with an AK-47. “I guess you owe me one,” he quips to his apparent new ally.
Rabbit (Ben Cross) still has his grandson. They’re playing chess together, keeping the wits sharp. Well, Max doesn’t want much of that. In the meantime, the big boss is not happy to hear about Hood making it out alive from the Cadi. Speaking of which, everybody descends upon the makeshift police station. Deputies Brock (Matt Servitto), Siobhan (Trieste Kelly Dunn), and Emmett (Demetrius Grosse) arrive on scene to find Lucas in a daze. Only issue being the FBI, led by Agent Dean Xavier (Derek Cecil), is in the mix, so that makes everything a little tricky. When things get tense, Hood gives up his badge and walks out the door.
Simultaneously, Job (Hoon Lee) and Sugar (Frankie Faison) are doing work behind the scenes to suss out where Rabbit is headed. They can’t get hold of Hood, certainly. But everything is messed up now. Job knew it, still does, yet Hood is blinded by love and devotion to Carrie (Ivana Milicevic). Then she shows up out of nowhere to start being one of the team again: “The gang‘s all here,” Job says dryly.
At home, Carrie’s left a family in her wake. Deva (Ryann Shane) is so obviously thrown off by everything, like anyone would be, as is her father Gordon (Rus Blackwell). Him perhaps most of all. Knowing she’s not his daughter, loving her like one anyway. Neither of them understanding Carrie, why she did any of this, or what her life was before everything in Banshee. A confusing and brutal time for the people that love Carrie.
Hood gets on the phone with Rabbit. They have a talk, revealing Hood knows he’s responsible for so much of what has happened. This oddly pleases Rabbit. He likely just wants to watch Lucas die.
Over at the Proctor residence, Kai heads into his wine cellar. It’s there he’s attacked by the man Longshadow talked to earlier. Only Clay Burton (Matthew Rauch) is always lurking. A nasty, bloody death. When Clay chokes the man to death asking who sent him to kill Kai, he responds through the garrote: “Fucking Indians.” Now they know. Uh oh.
Flash back to jail. Hood is being analysed by his therapist about having done something unthinkable, turning back and letting himself be taken into custody. All for Carrie. In the present, he’s doing the same thing again. Giving himself over to Rabbit, so that Carrie and her new family, her new life can go on. A noble, horrific deed.
Alex and his sister Nola (Odette Annable) receive an eerie gift on the doorstep. Inside, the head of the man Alex sent to kill Kai. Included is a Queen of Spades from their casino. Instead of leaving like she planned, Nola wants to stay in Banshee. Just to see how things play out. 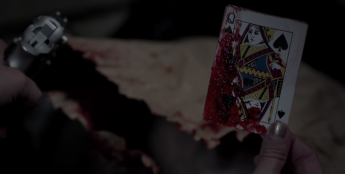 The exchange is done. Hood goes with Rabbit in place of Max. Then he’s knocked out, surely being readied for something nasty.
Everybody back at the bar is concerned, as is expected. Gordon shows up to let his wife know about Max being safe. Afterwards, Carrie begins piecing together what’s gone down. Job and Sugar finally figure out where they’ve taken Hood, somewhere out in the wilderness at a factory. They suit up to go take care of business. But Carrie and Gordon have things to work out, a whole life to salvage. She chooses instead to honour her love for Hood, regardless if it continues on after this or not. She left him behind once, and will not be doing it again.
In jail again, back in the day, Hood figures out the therapist is friends with Rabbit. She brings him a message – no parole, full time served. So he opts to punch her face in. Switch to present day, Rabbit and his men work Hood over. The two men face each other, Hood tied, bloodied to a pulp, and Rabbit rubs salt in the figurative wounds. Plus, there are new wounds with all the punches they give him.
On their way to kick ass, Carrie, Job, and Sugar are stopped by Deputy Brock. He asks them all to step out of the car after noticing Carrie’s got lots of fresh bruises. This is no good. So many angles to this entire story, that it’s starting to get tricky. A fine mess.
Rabbit (to Hood): “You betrayed me for love. Then you got out of prison to find your love had betrayed you, and then a few days ago she barters your life for her own? My daughter is better at punishing you than I could ever be.”

Well now Carrie lets the deputies in on what’s happening with Rabbit. Soon enough, everybody’s convinced once Siobhan reminds everyone what would be happening if it were any of them and Hood was in their shoes. Everybody’s off now. Guns at the ready.
Job starts things off with his characteristic sass. Then all hell breaks loose, as the Banshee gang take Rabbit and his Ukranian mobsters to school on how to fucking get down. Love how Carrie is leading the charge while the cops are taking orders. This is such a weird yet excellent situation, only on this series could this converging of characters and situations work so well. The way Jonathan Tropper weaves everything together here in this finale is amazing. Another example of his talent in this season finale.
This whole sequence is god damn perfect. Time after time, Banshee proves its weight in quality, as the action is right on par with the drama. Each is paid equal attention in how well they’re constructed, both the action scenes and the fight choreography, as well as the structure of the plots and the overall story. Honestly, this series does not get enough credit. Sure, lots of fans and enough to get four whole seasons out of it. But this should’ve been the biggest damn show of all. For all its wild unbelievable nature at times, even in its premise, the show makes up for it through so many solid episodes and arcs over the course of its run. This finale is merely one example.
There’s such a killer little moment with an RPG during the end of the large gunfight that’s almost too perfect. Really put icing on the whole cake. A deliciously bloody, violent cake.
In the end, Carrie shoots her father in the chest: “Goodbye, daddy.” Then goes to work trying to save the beaten, stabbed, nearly strangled Hood. He nearly laid down his life for her, for her family. He was going to give up his own daughter. All for Carrie, a.k.a Ana, a.k.a the love of his life.
The aftermath is chilling. Bodies everywhere. Bullet casings and smears of blood all over the place. Brock is left wounded, as is Sugar slightly. Brought out on a stretcher, Hood holds on with his wounds to get patched up at the hospital. Carrie goes to her house, though greeted by an unhappy husband who packs up his kids to leave. The whole town is in disarray, from the state of the Cadi to the streets to the very people themselves.
Worst of all, Mr. Rabbit’s body is nowhere to be found. Only a picture of him and his daughter, an old one, left in a pool of blood.
As Kai stands outside showing Rebecca the new casino/hotel, and Mayor Dan Kendall sits up in one of the windows having a cigarette, calling his phone, an explosion is set off after Kai has his niece dial a number on his cell. Whoa. That’s some unexpected fallout, while Kai was only trying to send a message to Longshadow he inadvertently committed another murder. Big one, too.

Out amongst the trees, there’s another crime scene. This one is bad news: they’ve found a body with a hole in its hand, next to another one. Sound familiar? Ah, that whole thing about reaping what we sow. It’s possibly going to start blowing back on ole Hood. With Agent Xavier on the case, as well as Banshee PD sniffing around, things may get sticky. What a finish to this season!
After the credits, we briefly see a young man named Jason Hood calling to try and find his father. Oh. My. God. Another string to get pulled from out of the wool the fake Hood is weaving. And with a video on YouTube of Hood fighting that MMA champ, it’s about to get real interesting in the little town of Banshee. All over again.

Next season is a blast. Only gets better with each passing set of episodes. Another ten coming at you soon, as I review Season 2. This’ll be my second or third watch of these episodes, and still I always find enjoyment. A solid, quality work of television magic.