One of the Nazis that killed Emmett and his wife is being hunted. By whom? Oh, you know. Sheriff Lucas Hood (Antony Starr). Shotgun and all. Because in a town like Banshee, with a sheriff like that, you do not want to be on the wrong side of the law.
Except it ain’t just Hood. There’s Deputies Brock Lotus (Matt Servitto) and Siobhan Kelly (Trieste Kelly Dunn), too. They’re all along for the ride this time. And it scares this little Nazi to death. “You‘re the sheriff,” he yells, to which Hood replies: “Allegedly.” Right before they gun him down, cold blooded. It isn’t one criminal on the force now. They’ve all gone in head first.
But this is part of the Banshee‘s greatness. It makes us cross that grey area and wonder, what would you do? Personally, I’d probably do the same as them in the same situation, I’m no better. The fun of this series is some of the moral dilemmas in which the writer places the audience.

Carrie (Ivana Milicevic) and Gordon (Rus Blackwell) are no more, as she has intense sex with Colonel Douglas Stowe (Langley Kirkwood). He seems totally cool with their lax relationship. At the very same time, Siobhan and Hood are in bed together continually becoming closer. What’ll be interesting to watch this series is how both Carrie and Hood move on. From everything, from one another. There are some exciting plots this season, so get ready.
Kai Proctor (Ulrich Thomsen) seems to have finally crossed the line. He wakes up in bed when Clay Burton (Matthew Rauch) comes to get him. Only he isn’t alone: his niece Rebecca Bowman (Lili Simmons) wakes up, naked, next to him. Oh. My. God. Kai, you’ve really done it now. This is hideous. More hideous than what he’s doing downstairs with a guy Clay’s interrogated all night.
Everyone at the station misses Emmett. In his absence, Deputy Billy Raven (Chaske Spencer) has taken the job. They don’t treat him badly, but Billy wants them to respect him. Surely he’ll prove himself along the way. In the meantime, the “dead neo–Nazi with multiple priors” they shot and killed is zipped up; looks like a regular shooting, no suspicion on them. Brock is a little rattled, and questions why Hood isn’t. The mystery man keeps things cloudy, of course. 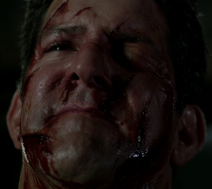 In the woods, men fight around a camp fire – The Fire Trials, a Redbone tradition. As if summoned from the depths, Chayton Littlestone (Geno Segers) returns. He’s come back. Will he have to re-prove himself? Seems like it. The man who took his place requires a fight, their tradition requires it. Not much of a challenge for someone as dangerous and powerful as Chayton. He takes back the throne and gears up the Redbones for real action.
For the first time, we’re seeing the inner life of Brock Lotus. He intercepts a call from Billy at the BPD. How come, I wonder? Well, Brock has an ex-wife, Emily (Tanya Clarke). She does this a lot, apparently. She’s lonely, blames Brock for their divorce because he’s career oriented. Cheated on him. Yet it’s clear that Brock can’t let himself get away from her completely. Afterwards, Brock has a drink with Emmett at his grave. I feel so god damn bad for Lotus. He is a good man that’s been sucked into so much chaos, so many lies. Plus, his wife and all that, everything’s just up against him.
And then there’s poor Deva (Ryann Shane). Not only is she reeling from all the things happening in her parents lives, she is further becoming much too similar to her parents. In that thieving comes naturally. Luckily, it’s Hood himself that finds Deva and her friends robbing a head shop. Bit of daddy-daughter time. He teaches her a little bit about robbery, the good parent he is, as simultaneously her mother is out doing some sneaking of her own. 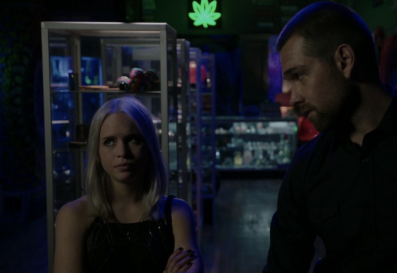 Deva: “You think I wanted to get caught?”
Hood: “Self–destruction runs in the family”

At home, Carrie finds Gordon waiting for her. He isn’t happy she was out doing whatever while the kids were at home, all alone. Right then and there Hood arrives with Deva. She’s got questions about their past. For his part, he does his best to make Carrie look good to her daughter. There’s good and bad about what Carrie did. On the one hand, she tried to protect her family. On the other hand, she let Deva’s real father go on unknowing, in prison. All alone. A sweet moment between Deva and Hood, as he basically confesses his love for her, his daughter. Then I feel awful for Gordon while he’s talking to Hood: “I don‘t care who made her, I‘m her father,” he chokes out through the tears.
Outside the strip joint Rebecca finds a hand around her throat, pinning her to the wall. Chayton. He threatens to come for all of them. Real soon. Seeing as how they’ve taken Alex Longshadow out. Now that’s some war talk if there ever were, and it rocks Rebecca to the core. This is what being in business – and in bed – with Uncle Kai truly means.
On a road down from the military base around Banshee, Chayton fires a compound bow at a bunch of soldiers. Then some Redbones show up for a gunfight. Yikes. Things are moving fast now that Big Littlestone is back in the county. Hood and Lotus arrive on scene to put up some fire. However, Chayton and the Redbones already have the upper hand. And once Hood sees who it is causing the shit, he’s really thrown for a loop. 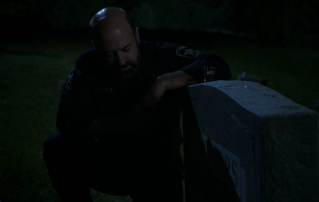 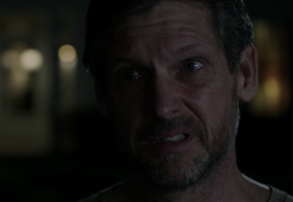 Up at the base, Hood goes to meet Colonel Stowe concerning the trouble on the road earlier. Most interesting is when Hood sees what’s being kept at the base – drugs, weaponry, and best of all MONEY, tons of it. Oh, man. Just the way he looks at the cash, he may as well lick his lips. This can’t mean anything good, especially considering Carrie’s in bed with Stowe. For the time being, Hood is being cut out of the investigation. That only lights a fire underneath him. What I love is that we know Hood is ex-military, of some sort. So watching him come up against these guys will be interesting.
Afterwards, Hood calls Sugar Bates (Frankie Faison) about that “one big job” they’ve talked about, a possible collaboration they could get together on. This brings them to think of Job (Hoon Lee), who’s busy with a gun pointed at him, forced to hack. But as always, he’s one step ahead of everyone else, Fat Au (Eddie Cooper) in his corner with the fire power. Wonderful action sequence here with Job popping off rounds and getting right in the middle of the shit. When he gets onboard, everything is moving, though Job definitely has reservations about the soldiers, the big guns, all that sort of stuff. Meanwhile, Carrie is not happy, and you can be sure this is something that might keep her spirit up.

After the credits, Chayton sits carving symbols into his bow. Readying for war.

What an amazing opener to Season 3. Oh, and Nola Longshadow (Odette Annable) is still kicking around. Prepared to avenge the death of her brother. What will she do?
Next episode is titled “Snakes & Whatnot”, so stick around and I’ll have another recap/review for you shortly.