We see Olek (Chris Vasilopoulos) again. A younger Mr. Rabbit (Ben Cross). They’ve got a man named Yuri on his knees, questioning whether he stole from the boss. He did, in fact. Not a good sign for ole Yuri, though he tells the truth. Right before having his throat cut. A look at the ruthlessness in Rabbit, heading into a swan song for either him or the ones against him in this season finale.
Then we’re privy to Carrie a.k.a Anastasia (Ivana Milicevic), Olek, the man now known as Hood (Antony Starr), and Rabbit all drink after the latest job. They talk about the diamond job coming up. Hood and Ana are each seemingly reluctant about this new caper. Furthermore, we see the little looks between the lovers, between Olek and Rabbit, the first inklings of something going on behind closed doors within their supposedly tight-knit crew. Rabbit tells Hood, he sees him “as a son” and trust him deeply. A very Godfather-esque moment.
Afterwards, we watch Hood and Ana together right after Olek sees her to the door. Sneaky, sneaky. Their love is clear, that’s for sure. They also talk about the future, escaping from underneath her father. And then Hood assures her everything is under control. This is when she finally meets the one and only Job (Hoon Lee), as he dances onstage in drag to Sylvester’s “You Make Me Feel (Mighty Real)”. That’s before someone heckles him. Then Job stops his show to call the dude out. He even kicks the shit out of the guy in front of a crowd. What I love most about Job and Hood’s relationship is that they’re great friends, they have a positive relationship together, and we don’t get some weird, uncomfortable relationship between this guy like Hood being friends with Job who crossdresses. Instead of making Job out as some weirdo, the writing on Banshee puts him in an excellently positive light.
In this flash back through time, we also see Agent Jim Racine (Zeljko Ivanek) introduce himself to Rabbit. This begins a long chase of FBI man after the Ukranian gangster, one we’re still in the middle of coming to the season finale, even if Racine is now dead. 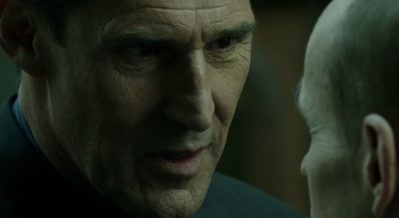 Back to the present, as Carrie and Hood search out a gangster he knew named Fat Au (Eddie Cooper). Well, naturally they come up against resistance. And this leads us to a nice tag team fight for the lovers. They knock down some fighters before guns are drawn, but at least they’re able to get a meeting with the big man. As it happens, Au indeed remembers his old buddy: “I heard you died, man,” laughs Au. Moreover, Hood once saved the man’s life. A debt the gangster is more than willing to repay, tenfold.
Better yet, Au calls Hood “Soldier Boy” and we start to discover he was in the army long ago. Or well, something similar. Perhaps this is a great indicator as to Hood’s character, his true identity. How he fights. This is juxtaposed with a tense flashback, to Olek and Hood fighting with gloves on; Olek challenges him, almost as if either jealous of him and Ana or testing his loyalty, or a bit of both. Rabbit also seems to know about his daughter and Hood. Slowly, we see the messy end of this big crime family.
I really enjoy the parallels between past and present. Here, we watch the flashbacks and the present day playing in unison, cut together. Ana and Hood saying goodbye heading out on the diamond job, ready to get betrayed v. Carrie and Hood saying goodbye to Job on their way to face the final assault against Rabbit.

Carrie: “How many lives have you lived?”
Hood: “None, really.”

In the New York church, Carrie meets her Uncle Yulish (Julian Sands). Then a row of gunmen. I LOVE THIS SEQUENCE! Carrie and Hood go deep, diving in. They take on the guns like two immortal bad asses, as their beautiful Massive Attack theme plays over the gunfight. Bullets spray through the church. The two lovers are stuck, much like that night on the heist 15 years before. Hood replays those images in his mind.
Then he goes to sacrifice himself. All over again. “Get back to your family,” Hood tells her. But as Hood jumps out with his knife in hand, Job, Au, and friends arrive to gun down the remaining men. Just a heartbreakingly awesome, fun, wild scene. Even Yulish gets murdered, too.
But there’s still Rabbit kicking around.
We flashback to a meet between Rabbit and Racine. The agent is there wondering about the kid picked up trying to pull a diamond steal. There’s a Ukranian recorded having called in the robbery, before the robbery even started. Oh, a thick pile of shit. More importantly, in the present Hood finds Rabbit on the same bench. That very courtyard is where he was married, so that explains its significance, other than being where his brother was priest. Rabbit talks long about the past. Then he’s given a gun to shoot himself, which Hood watches with pleasure. So Dt. Bonner and the police are left with an insane amount of bullets, blood, corpses, all left in the wake. What comes next?

Back in Banshee, Hood and Carrie return to their lives. Or whatever life they have there, respectively. Another goodbye between the lovers, as Carrie goes back to Gordon, Hood goes to the bar with Sugar (Frankie Faison). Always, they’re parting. Never coming together like the tropes of romance hope. But for now, Hood goes to Siobhan (Trieste Kelly Dunn). Their relationship is certainly tenuous, though undeniably so; they are perpetually attracted to each other. That’s just never a good sign, for anyone to get close with Hood. He simply cannot survive alone. He is a lover AND a fighter.
Meanwhile, an unexpected relationship between Rebecca Bowman (Lili Simmmons) and Alex Longshadow (Anthony Ruivivar) is budding. She’s sidling up to him. They start to get sexual, and he’s beginning to believe he now has an upper hand on Kai Proctor (Ulrich Thomsen). Only he underestimated the “Amish girl” he finds so sexy. When she seems to go for a gun in order to kill him, Alex flies into a rage. It only gets him a knife in the neck. Strangely enough, the knife George flung at him recently. Ironic. Kai becomes amazed after discovering the lengths to which his niece will go to try pleasing him. They get much too close later, as well. Yuck.
And sadly, former Deputy Emmett Yawners (Demetrius Grosse) along with his wife Meg (Stephanie Northrup) get killed in cold blood, machine gunned by Nazis in the road. A bload soaked few moments, cut back and forth with Rebecca also gunning Alex to death.
The biggest surprise? Deva (Ryann Shane) arrives in Hood’s office: “Hello, dad,” she greets him.

Then, in New Orleans we see a familiar face: Chayton Littlestone (Geno Segers). He’s fighting in an underground ring, cheered on by masses. He kills a man right there in front of them all, snapping his neck and spine. Following his fight, Chayton discovers it’s time to head home now that Longshadow’s dead.
This is the big baddie for Season 3. Just wait for the terror to come. It is insane.