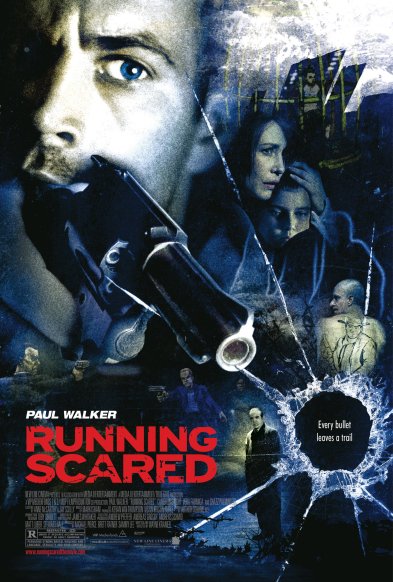 I’m not a Paul Walker fan, there are only a couple movies I enjoy with him in it. This being one. He was never a bad actor, just never picked the greatest projects. Running Scared gives him a significantly meaty role into which he could chew. On top of that the entire story and its plots are super fun. This is part personal drama, part chase film, part mob movie, and more. You’ve got action, crime, lots of drama. If anything there’s almost too much involved throughout the screenplay. This is actually a great little flick, one destined for more cult status as the years wear on. Part of its flaws lie in the wild nature of the writing, the over-the-top elements get a bit tiresome. Part of its excitement also lie in the very same thing. So this movie remains a good example of when weird gets a little out of hand. Despite the nonsense, Running Scared gets exciting, thrilling, even slightly disturbing. There’s no getting past the flaws, sadly. What might have ended up a solid action-crime flick gets too convoluted for its own good, never able to grab that foothold necessary to climb past its bored trappings. While I can throw this on for fun I’m not able, or willing, to say this is anything more than a guilty pleasure. A cotton candy action movie. Lots of crime to boot. A ton of characters with quirks doesn’t make up for lack of character development and a story that’s always rushing, trying to do good on everything it’s missing. I want to love it, I do. Walker does well with his role, as do Vera Farmiga, young Cameron Bright, among others such as the always charming Chazz Palminteri. The action is a thrill, the story’s got provocative ins and outs. There’s no coming together of all the good aspects. By the finale you’re only wondering where all the potential went.

My favourite touches…
Anzor (Karel Roden) represents the failure of the American Dream. When he talks about seeing John Wayne in The Cowboys originally it was on 8mm and they cut out the hero’s death, as it was for children. Upon coming to America, he sees the real version where Wayne’s character dies, shot, walking away. This is the perfect exemplification of that realization by an immigrant coming to the U.S., that all that idea of the American Dream is merely smoke and mirrors, it’s a fake, a movie, a plot like any other in a made up movie. It all speaks to his own situation, a Russian coming to the States, ending up as a criminal on the streets involved with guns, drugs, and everything else in that realm.
The whole structure of the story is excellent, even if the film as a whole doesn’t pay off on all the cheques it cashes via several different plot threads. For instance, the multi-layered plot involving Joey Gazelle (Paul Walker) working for the mob and having to hide the gun, the gun gets taken by Oleg (Cameron Bright) and gets used on Anzor triggering his paranoia, in turn triggering a sketchy situation for Joey with his mob pal Tommy (Johnny Messner) and his father, Boss Frankie Perello (Arthur J. Nascarella), all of that sending poor Oleg out on the run where he goes from one dangerous situation to the next, travelling between scary locations, each worse than the last. So within all that there are these nice mini-chases between set piece after set piece. Cool enough. Joey gets thrown around the city and this makes for an interesting journey through the streets of, funny enough, Prague, though the setting is more somewhere like New York or New Jersey. With nothing ultimately interesting enough to carry things completely through, we’re left with just a bunch of connected scenes that feel as if they could’ve made up two movies. There aren’t enough pieces to make a whole puzzle, only little bits that connect, but only in the sense they’ve got all the same characters involved. This is a typical mob movie that tries to be more, ending in a mashed up slop by the finish of its overly long runtime.

My biggest issue with the film is there’s no real character development in any of the characters. Sure, we do get revelations concerning our lead. Other than that it’s barely non-existent. The characters themselves are incredibly interesting. However, there’s never any time to flesh them out. We’re far too busy riding along and zipping through various landscapes, locations, different oddball settings. There’s a little bit of style, as far as the look of the film is concerned. This is neither unique enough, nor flashy enough to keep our minds distracted from the bunched up plots and the various characters tossed into the middle of them. In fact, the greatest development out of any character is saved for a feeble plot twist last in the game. Something that could’ve been used to much better effect were it given up early on. That way, more development would have come from that one point. Instead, it’s a forgettable end to a middle of the road story.

The one thing that saves this aside from those few interesting portions I mentioned is the cinematography from Jim Whitaker, whose work includes Thank You for Smoking and director Wayne Kramer’s The Cooler, as well as other titles. Whitaker makes the look of the film sort of glossy. All the same things are kept ugly, gritty, matching the dirty cop/criminal plot playing out. In that visual aesthetic, Running Scared is able to stay captivating most of the time, even if it’s lacking in fairly significant areas such as the development of characters. You can find plenty to enjoy with the weird characters, just don’t expect that to go anywhere further. The plot is decent, though again, it never gets anywhere because saving such a juicy reveal for its finale takes away potential power. Still, throw this on if you’re looking to pass the time with a few thrills, a chill tossed in for good measure. The action and the weirdness won’t make this a classic, shooting the whole movie in its foot because of excess. You’ll be able to find something to dig, not every fun movie has to be a masterpiece after all.