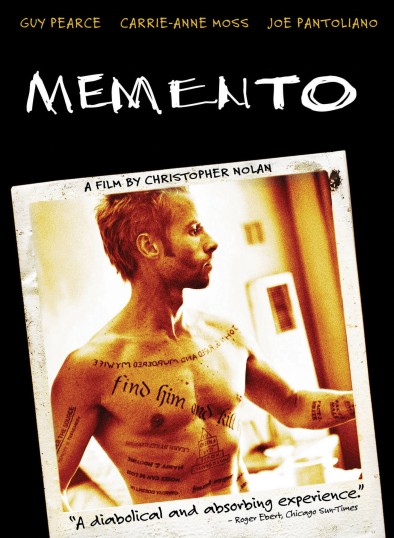 Christopher Nolan has moved on to bigger blockbuster-type movies. Once his reiteration of the classic Batman character hit theatres, nothing was ever the same for his career. Much as I’m a fan of his Batman trilogy, even a big Batman fan before him, the Nolan I prefer most is the one who did Following, remade Insomnia, and of course the one responsible for this cinematic gem, Memento.
Right at the turn of the 21st century, Nolan gave us an interesting mystery film that defies the expectations of the genre. It’s a thriller that works backward through the chronological order, instead of forward, and in a way is anticlimactic. However, for all its different techniques the movie never feels too much like a try-hard indie, hoping to break the mould with a script that’s beyond quirky. There’s every bit of the independent film spirit within this piece of work. Although, Nolan never goes for the cheap thrill. This is a cerebral thriller, stained with blood and mystery and the shattered frame of a brain’s memories. Guy Pearce puts in a whopping performance in a tough role that effectively put him up there with the best actors of his generation. Every scene is interesting because it not only looks good, they all force you to think forward, backward, every which way. The structure of the movie lends a hand to the plot, the focus on memories and a backward sequence of trying to retrace one’s steps (literally one’s memories). A powerful revenge story that’s fuelled by heart, though ultimately a story that never resolves itself fully. And that’s part of the point, as we take the journey with the main character Leonard (Pearce) discovering there’s no way to fully resolve his situation. At the bottom of it all, there’s the question of revenge itself, and if it would make a difference to Leonard.
While Leonard has no short term memory because of an attack on him and his wife, precipitating his seeking revenge, this is a way for Nolan to ask us: is revenge worth it, even if you could remember?

Part of Memento‘s interesting charm overall is the way Nolan challenges how we watch a film. In turn, this calls to mind how Leonard himself recalls memory. We come to like he does in the midst of his day, in places where he doesn’t exactly remember (unless they’re marked on one of his cue cards or tattooed on his body). The writing, the scenes and how they’re edited into one another like stitching, this all initiates us into the experience of Leonard and his memory issues.
So while it may feel like a gimmick to some Nolan employs the backward chronological order for a specific purpose, to replicate those ideas of memory while simultaneously playing with the format of film itself, as well as how the audience watches one. The clerk at the motel (played by the excellent Mark Boone Junior) says it best, that feeling like you’re waking up everyday – how Leonard describes his condition – must have everything feel backwards, literally describing the film and its structure: Leonard thinks he wants to do something, but he’s not sure about what he’s just done. The writing is truly genius. If you don’t admire Nolan’s filmmaking, another aspect in which he excels generally, how can you not find his writing compelling? This screenplay speaks volumes. At first there feels like an intricate-style, labyrinthine weaving to the plot. And to a degree there is. Yet the way Nolan presents it makes the difficulty wear off. Soon you find yourself along with Leonard for the ride, full stop. Something I dig is the fact that this backward order of scenes kind of prevents us from trying to think ahead, it takes away that element of jumping past the story and worrying more about “whodunit” than any of the best parts about the plot, the film as a final product, so on. 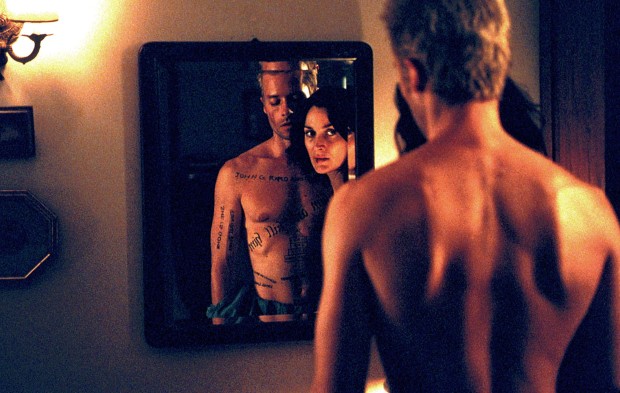 A moment I love is the first real flashback we get from Leonard, concerning his wife. Because it starts out while he’s in the diner, then when he closes his eyes the sound design takes all that noise out – the other patrons, dishes clinking together, food frying, et cetera – and we fall inside his head with him. The cinematography throughout the entire film is spectacular. In this scene, there’s a beautiful, dreamy quality to the memories, the raw, genuine stuff Leonard can remember. This distinctly divides parts of the movie, as we get this nice sort of washed out look to the regular parts of the present, a sparkling beauty to the memories of his wife, a darkness to the night of her death, and then there are the black-and-white flashbacks to other portions of Leonard’s life, including his old job, Sammy (Stephen Tobolowsky), his conversation on the telephone in the motel room. Nolan seamlessly connects these looks to make a whole, a palette that stretches out over just a little under two solid hours. It’s a rich, interesting tapestry that will captivate any curious audience. The directorial choices from Nolan are what make his screenplay work, proving he’s a solid writer as much as he is a director.
The plot is what makes this movie so unique, yes. Pearce is the soul which drives the story. His voice-over narration is spot on. Moreover, he constantly embodies Leonard, keeping us confused along with him until the pieces fall together. The way Pearce plays Leonard makes us feel for him. At times, we might even get a bit frustrated; both for him and with him. In the more frantic moments Pearce truly wrings out the empathetic qualities, pleading with us to feel his pain, and most times it takes very few pleads. He makes Leonard charming, to the point, he’s an odd man due to his condition yet there is a friendly feel to him. This single performance is why I’ve kept an interest in Pearce, no matter the role he takes. A once in a lifetime performance in a strange, innovative bit of mystery cinema.

This is one of the first great movies of the 2000s, right as the new century came about. Memento takes you by the hand, down a bumpy road filled with unreliable characters, an unreliable narrator, and throws you down the corridor of revenge on a trail of broken memories. There aren’t any better films that relay the feeling of memory. Above all, Nolan’s writing and directing – aided by the incredible cinematography of Wally Pfister – takes us through the process of what it’s like to rebuild memory, to have to out of necessity for the revenge of a terrible event. Along the way we spend time with Leonard, who’s most certainly a classic film character that will go down with the greats, and Pearce flesh him out well to the point we’re caught up intricately with his dilemma right to the bitter end. Again, I do love Nolan’s later work – The Prestige is one of my favourites out of his catalogue – yet I can’t help returning to his earliest efforts, such as this treat. Over any plot or character developments, Memento gives us a masterclass in form, allowing the cinematic techniques Nolan brings to the screen to play the lead character even above Pearce. Don’t mistake it: this is not a movie, it’s a defining experience of film.