We open on a young woman running from something or someone unseen. There are other women. Then there are gunshots, headshots, men with strange suits, all in a foggy forest, swamp-like area. One of them is Clive, from the whorehouse when Tulip (Ruth Negga) cleaned everybody out. They’re only playing paintball. Until one of the women falls into a hole in the ground, a deep, dark one.

Skip back to when Jesse (Dominic Cooper) was only a young boy. His father preached in Annville. Now, in the present, Jesse Custer tries to do his best in the same position. Then there’s Cassidy (Joseph Gilgun) who’s got his own questions about the two men, Fiore (Tom Brooke) and DeBlanc (Anatol Yusef), that keep coming for the preacher. Side note: I love the getup Cassidy puts on to go out in the sun, it’s amazing and hilarious. Also, Cassidy is trying to warn Custer of what’s to come re: his new found powers, but the holy man just won’t listen.
Over with Sheriff Hugo Root (W. Earl Brown), a body’s being hauled out of the mud; the girl from earlier. Odin Quincannon (Jackie Earle Haley) is there having his say, and it becomes more clear by the episode who runs their little town.
Meanwhile, Emily (Lucy Griffiths) dealing with Jesse and his renewed sense of enthusiasm. She suspects deviousness, though he plays dumb. She heard things about Jesse and the bus driver, all that. 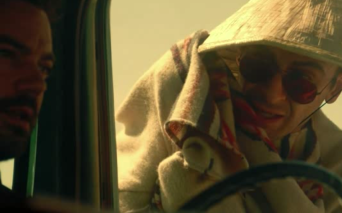 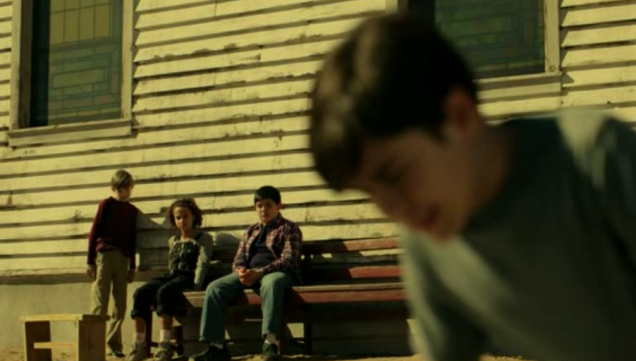 We get more looks at Jesse as a boy, his father whipping him in front of the other kids after catching him smoking – a habit that wasn’t whipped out of him. He’s still on the pack.
Cassidy is still scheming with Fiore and DeBlanc. They tell him about being from heaven, sort of like angels as he assumes. We discover the song DeBlanch sang a couple episodes ago to lure out the thing in Jesse is that entity’s favourite song; dig it. Better than all that, Cassidy gets a bit of cash out of them to buy some drugs. Y’know, because Jesse apparently has a thing for “controlled substances” and that’s a perfect opportunity for the old vampire to get his buzz on. Imagine being an ancient bloodsucking creature with nothing to do but waste time. Why not get wasted?

Quincannon meets with Mayor Miles Person (Ricky Mabe), and he doesn’t look too pleased with some of the Mayor’s latest meetings. We begin to figure out with every new scene featuring Quincannon how he’s a disaffected, scary sort of man. He doesn’t show much emotion, which is scarier than someone that freaks out. He merely takes a piss right in Miles’ briefcase. “Plain as pie,” like the man says himself.
At the motel, the heaven-sent henchmen wait to either hear from Cassidy, or hear from someone on the other end of their strange telephone.
People are remembering the dead woman at the whorehouse. Only Tulip doesn’t have time for any for Clive and the other men, nor the women for running around in underwear being hunted down by men with paintball guns. Furthermore, we get a bit of history: Tulip’s mama was a prostitute there, reason why she and Mosie (Frances Lee McCain) – the owner – are so close. But the anger in her comes out. She walks into one of the girls rooms, thinking she’s swinging a bat at Clive, and whacks the guy right out the window.
Luckily, that guy was Cassidy. A piece of glass stuck in his neck won’t be the end of him. Tulip tries to help the guy, bringing him to the hospital. Where he sneaks off and she finds him drinking blood packs. Yikes. Cat’s out of that bag.

More flashbacks. Papa Custer goes to see Odin Quincannon, as a young Jesse sits outside waiting. Something bad happens in the office, and Jesse knows it. “Some people just can‘t be saved,” his father tells him. In present day, Jesse helps Odin with a large model, painting little soldiers and placing them on the landscape. Quincannon paints while Jesse brings up new things about the church, as well as Odin’s lack of attendance over the past few decades. The business man doesn’t have any time for the invisible man in the sky. Well, the preacher makes a deal: come to Sunday service, if he isn’t sold then Odin receives the land that once belonged to Jesse’s father.
During the service on Sunday, a new sort of sermon comes out of Preacher Custer. He talks in a more raw, upfront tone, inflammatory at times even. He charges them with being “sinners” and that they’ve strayed from the right path. Jesse’s plan is to turn Quincannon over to the Lord, in turn convincing everyone else. Of course Odin does not initially move over to the side of God. Not until Jesse breaks out his power, compelling him to “serve God” and then BAM – Quincannon is on the side of the Lord. Praise Jesus. Or… praise something.

The two heaven henchmen hear their weird little phone start ringing. Someone up above is calling. But who?

Another great episode. Love the slow build up, as we get one little bit of information after another, gradually turning into something bigger, something wilder. The next episode is titled “South Will Rise Again” and I’m excited to see more. Lots of naysayers, naturally. Let them nay say. I say dig it with me, if you do.