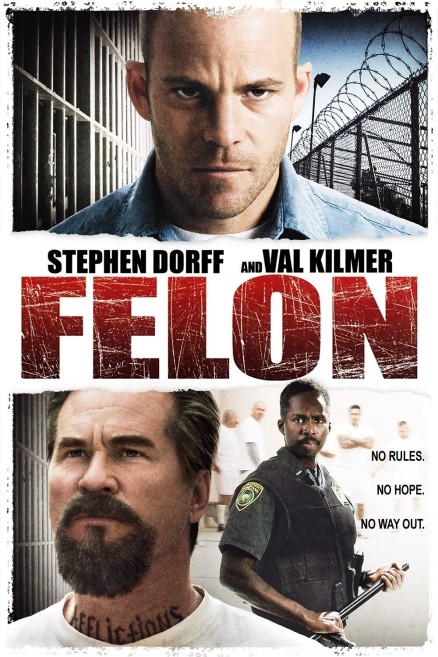 Director-writer Ric Roman Waugh hasn’t done much in the way of his own feature films that interests me, if we’re being honest here. That being said he has had one fine career. His stunt work ranges from a not-so-guilty pleasure of mine Road House to Lethal Weapon 2, right up to Stephen Spielberg’s Hook, the contemporary sci-fi classic Total Recall, to things like True Romance and The Crow. No wonder Felon is equal parts cerebral prison drama and solid action, including some impressively choreographed fights that go from controlled to frenetic in one wild swoop. Waugh doesn’t make a perfect movie. Although, it’s definitely one of the greatest prison flicks in the past couple decades. Scout’s honour.
I’ve always wondered what might happen to a man like Wade Porter (Stephen Dorff), whose spontaneous act of self-defence and will to protect his family leads to the death of a man threatening their home. If it were me, I’d probably end up dead. Instead, Porter gets inadvertently tangled in with a neo-Nazi punk named Snowman (Johnny Lewis) and an Aryan Brotherhood leader named Danny Samson (Chris Browning) after a stabbing during the prison transport. Moreover, he finds himself in the same cell as vengeful murderer John Smith (Val Kilmer); they become bonded after some time, and following a horrendous prison fight. On top of everything, a sadistic head of the prison guards, Lieutenant Jackson (Harold Perrineau), runs the block where Ward is located. Just another powerful, tough force against which he must fight; mentally AND physically.
Felon is about survival, it is about the morality of man and how the prison system can bend it. Waugh’s story tackles the life of prisoners, as much as it does the life of those outside waiting for those same prisoners. And it explores how violence is endemic in the prisoner, no matter their background, almost as soon as their sentencing is handed down. Wade is an example of this, though luckily his story has shades of light sneaking through from time to time. In the midst of all that blood.

What I love is that this has a diverse cast of different talents. There’s Harold Perrineau – I love this guy. He first came to me, and lasts longest, via Oz; he rocked that role and it’s one of my favourites on television, out of any series in existence to date. Usually he plays a nice guy, or a guy with good intentions. I love Jackson because Perrineau is showing his range. He is truly despicable, and that’s not all writing. His talent makes Jackson into something of nightmares, just another reason – aside from the threat of death and rape – prison is a terrifying concept to any lawful citizen.
The two powerhouses are Dorff and Kilmer. I’m most surprised at Dorff, someone I don’t usually enjoy much. Though I always try giving him the benefit of the doubt. His performance as Wade is genuine and it is emotional, as well as physical. He’s good enough to sell the emotional nature of the character, which isn’t overly complex, but he tugs at your heartstrings from time to time. Most of all he impresses me with the transition from regular first-time prisoner to a guy who’s short time in the prison system has altered him, right down to the DNA.
And Val – oh, Val! I love you, buddy. I’m one of the few who love this dude and his acting. Yes, he’s done some stinkers. Absolutely. Yet when Kilmer is on, he is on to the end. The writing of John Smith is interesting, as it doesn’t take the completely typical route of many hardened prison veterans that so often graces the screen. Smith is a quiet guy, most of the time that is. He is thoughtful. Also scary in his quiet thoughtfulness. His physical stature is interesting, too. He isn’t the same old ripped up guy that spent years in prison, with a lifetime ahead of him, focusing solely on his physique and reading books. He’s definitely read some books, he has street smarts and school smarts. There’s something about the way Kilmer plays this role that sets it apart from other roles out of similar movies. A joy to see a nice performance from him because sadly he’s done lots of trash and admittedly I know he checks out a lot. But once more: when Kilmer gets it right, he really gets down. 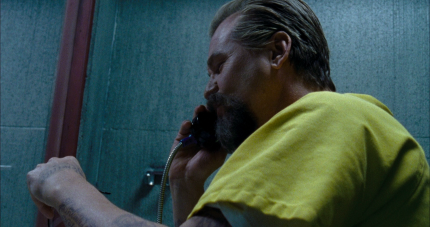 There is some truly brutal prison savagery in this film. From the first bit on the bus where Samson stabs that one man to when he eventually turns on the yellow-bellied Snowman. So many nasty moments in a movie that’s built on brutality. And I find the violence genuine. Yes, it’s hard to take if you aren’t into that sort of thing, though it is necessary. This is a story that’s based in reality, so at the very least the filmmakers had to present things with a realism instead of a glorified vision of prison violence. In this way we also see the paralleled violent actions of the inmates versus the guards, specifically Lieutenant Jackson. The line between inmate and keeper is obliterated, as Jackson becomes so clearly like the ones he keeps that it’s hard to distinguish by the end which is which. We know, of course, but still it brings into question all the moral issues we often think of when considering criminals – how far can those meant to uphold the law go? Certainly not as far Jackson does, nor those who follow him. That realistic fighting and all the various violent acts we witness throughout the film become one, a mass of fists and fury. Jackson, as is the case literally and figuratively, becomes a part of all that in one undefinable blur.
Furthermore, the character Kilmer plays is of interest to the greater whole of what Felon aims for thematically. He is the definition of revenge, having let vengeance consume him resulting in the deaths of the whole families of the men that raped then murdered his wife and daughter. He represents the symbolic consumption of the protector by violence. In a usual rape-revenge movie structure we see the man rush in, saving the woman, avenging her – really, he’s avenging his own ego. Here, Kilmer’s character is a guy whose avenging anger tore down his life. Now all he has is an eight-by-ten space to pace around and eternity, until he rots away into death to think about his dead, defiled daughter and wife. That’s really no justice, is it? Vengeance, sure. Justice? No. So ultimately, he redeems himself slightly by being that protector again. Only this time – STOP! BIG TIME SPOILERS AHEAD! – he literally lays down his life, he gives himself over to the great hands of fate and helps to do some actual justice, rather than just take it into his own hands. 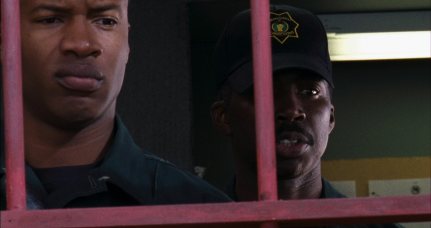 I loved this movie. Felon has its flaws, there are a couple cheesy moments and some inflated melodrama in certain scenes. On the whole it is a great little prison film. Everything is fun, from the intense fights and the scary prison violence, right down to Kilmer’s performance as an enigmatic prisoner jailed for taking revenge to a whole new biblical level out of the Old Testament. There are better prison movies, such as classics like Papillon and even more contemporary stuff like Animal Factory.
But there’s a vast sea of terrible prison flicks that don’t even come close to this awesome little surprise. The performances alone are worth it. You get a good dose of all sorts of other nice expected and unexpected treats along the way. If only Waugh would make more movies of this calibre and style.