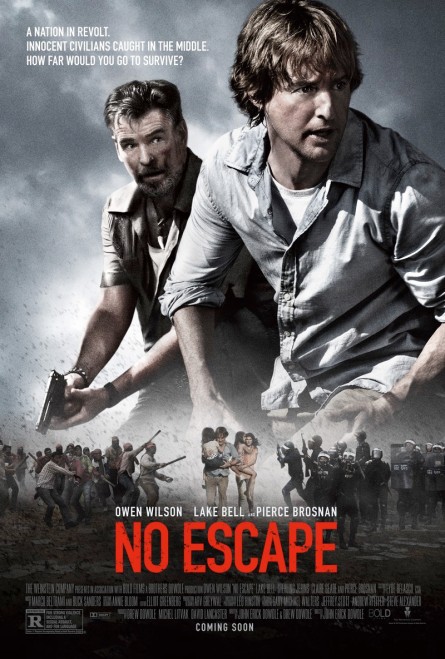 Ever since The Poughkeepsie Tapes I’ve made sure to keep an eye out for John Erick Dowdle. That was an intense bit of found footage horror which left a mark on me. That’s why when As Above, So Below came out I was quick to line up, and unlike many others I thought it was a solid, underrated modern horror movie. Then with the announcement of No Escape, my interest was piqued. Not only did I enjoy the concept of the film, the idea sounded great, I was also happy to see a few bigger names attached that I enjoy, such as Owen Wilson, Lake Bell, and the always charming, sometimes ass kicking Pierce Brosnan.
No Escape is a good action-thriller that takes place when Jack and Annie Dwyer (Owen Wilson/Lake Bell) end up smack dab in the midst of a terrifying revolution in a South East Asian country, their only hope is to stick together, to protect their family, and their only helping hand is a British man named Hammond (Pierce Brosnan).
There’s a special place in my heart for any movie that can make me physically, viscerally react. Many of the scenes and extended sequences are so suspenseful it makes you want to yell to the characters, they’ll make you feel right in the middle of the action, as if you’re about to be hit with a stray bullet, or hacked with a machete. There are a few faults, and one or two things I felt were overkill. However, the overall effectiveness of the movie is heavy, thrilling, and more than a few times you’ll find yourself checking the time left because the heart and the blood pressure can only take so much of this nerve wracking action.

The use of slow-motion is contentious for me. There are times it’s overused to the point it becomes nothing exceptional, only a bit of flash and eventually it’s like noise, it annoys you. In the beginning stages of the violent revolution there’s an excellent bit of slow-motion that makes things feel incredibly intense. And it’s only a few shots, perfectly used, to amplify that intensity. Afterwards we’re thrown into the visceral pulse of the streets, as Jack is caught directly in the middle of the revolution’s beginnings. Later, we do get more slow-motion, though I don’t think it’s overdone. They give us a little reprieve now and then from all the chaos.
There’s a pace filled to the brim by adrenaline that never really lets up. A few brief lulls between the action shift down gears, but for the most part we’re completely immersed in the pounding energy. Starting with an assassination, a nasty throat cutting, everything starts with a bang. The initial breakout of the revolution is a solid 10 or 15 minute sequence that will make your asshole pucker. Nothing ever really slows down until about 45 minutes into the movie. It’s just tension and suspense to the maximum. Alongside bloody, violent effects that illustrate a nasty coup going on in this unnamed, fictional country. As the plot moves forward the settings change at a rapid pace in combination with bigger, more wild effects from helicopters crashing to pieces of buildings toppling and more.

What I love is that this action-thriller is built on the foundation of some quality acting. First off, there’s Owen Wilson and Lake Bell as the lead couple. They’re both good actors, but they worth so well naturally as a couple that it’s impressive. Wilson plays the family man well, and once things break out he becomes this really great character whose entire being is focused on getting his family to safety. He has the confidence and the vulnerability in equal measures to make the performance stand out. Bell is as confident and vulnerable with the added touch of having that motherly quality. She plays the wife well, but does the mother even better. There’s a touching, tragic scene where she has to tell one of her daughters it’s okay to pee in her pants, essentially because if not they’ll be found out; the way Bell plays this scene off is just too much to handle, in the best sort of sense. And we’ve also got Pierce Brosnan, whose talents do not go unnoticed. This old bad ass role is better than the many Taken copies because he’s not some lone guy out kicking ass. He’s stuck in a genuinely life threatening, insane situation. Plus it isn’t a whole movie filled with Brosnan kicking the shit out of people. He simply adds a great element, this character, and Brosnan does well with the role. He’s mysterious, as well as a real white knight. Thankfully this is one of his better performances as of late.
I can’t not give this movie 4 stars. I went in expecting a decent few thrills, came out emotionally drained. No Escape plays on a lot of fears, from the tourist abroad in an unknown place to the worry of having your family put in the way of horrible danger. The actors are able to carry an excellent story, making you feel every last bit of the terror these people are experiencing. Start to finish, this movie has the action to keep you interested, it contains an enormous dose of heart. Maybe it isn’t your thing. But don’t say this movie isn’t packed with the goods. It is, and proves that Dowdle can handle all sorts of different projects. I hope to see more from him soon. This is a quality piece of action-thriller cinema that deserves to be experienced, full intensity and volume.