In 1995, Rust Cohle (Matthew McConaughey) and Marty Hart (Woody Harrelson) go to the prison to visit Dora Lange’s husband Charlie (Brad Carter). They tell him about Reggie Ledoux (Charles Halford) likely having killed her. He’s not happy. He tells the detectives about Reggie being a chemist of sorts, inside and outside of prison. Also, he claims Reggie talked about The Yellow King, Carcosa, that there were child sacrifices and “so much good killing.” A spiral tattoo, even. Too many strange things. Stranger still, they connect with tiny bits that Rust and Marty haven’t yet fully put together.
But it isn’t only the case that’s making things difficult. Marty deals with the fallout between him and Lisa Tragnetti (Alexandra Daddario). As in the fallout from him breaking his way into her home, attacking the man with whom she was having sex. Insane, really. He’d be up on charges if he weren’t a cop. Now, Marty is playing with fire. She feels disrespected, and that can’t mean anything good. At the office, Marty acts like the man, as he and Rust let everyone in on the Ledoux situation. He’s suspect numero uno. Another guy, Tyrone Weems (Todd Giebenhain), is someone connected to Reggie, so naturally he’s someone they want to find. When they talk to his mother, this leads them to his girl, which further and finally leads them closer.
For those who don’t know, writer Nic Pizzolatto plays the bartender in the scene where Marty acts like an asshole at the strip club bar. He’s wearing a KISS ME I’M AN ASSHOLE shirt if it isn’t obvious enough.

Problem is Marty fucked with the wrong girl. At home, Maggie (Michelle Monaghan) and the kids are gone. Only a note left. Seems young Lisa went to see Marty’s wife, let her in on what’s been going on. Y’know, extra-maritally. This puts quite the curve in the plan Marty had in mind for his life. The one where he pretends to his wife that he isn’t a cheating, lying piece of shit. While he is a great detective, a good man in the sense of being an honest husband, a faithful one, he is not. Not in the slightest. In 2012 with Dts. Gilbough and Papania (Michael Potts/Tory Kittles) we see more of Marty trying to justify to them – but mostly himself – that he’s a good man, underneath it all. And essentially, he does so through his work as detective. That’s his one and only redemption having obviously destroyed his own family life. Back to ’95, Hart tracks down Tyrone Weems and gets more info on Ledoux: the guy cooks meth exclusively to one client, the Iron Crusaders, a biker gang.
And this connects into the former life of Rust Cohle, a.k.a Crash when he’s undercover. This means there’s a way in, off the books, for Marty and Rust to get the drop on Ledoux. Hopefully. What I love most here is how Cohle keeps a lockbox of stuff from his old life undercover, right there. Can fit it under the couch, the bed. Wherever. Ready to come out at a moment’s notice. This gives us a look inside the other Rust and Marty, the detectives willing to cross the line of morality when absolute necessary, even if it’s not totally necessary, and do what needs doing. The cover story for what happens next is that Rust has a sick father, he took time off in ’95 to go see him. Both detectives tell Dts. Gilbough and Papania this same story in 2012. 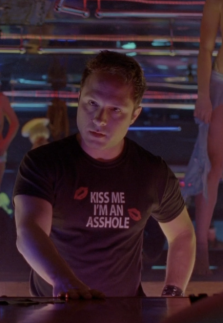 What really happened?
Crash Cole doesn’t only go back undercover, he goes DEEP undercover. He makes fake track marks in his arm to look sincere, but snorts very real cocaine to get in the mood, smuggling some out of lockup to make things appear above board to the targets of his in the Iron Crusaders. At a big party, he meets with Ginger (Joseph Sikora). Perfect time, as Ginger has a job that requires someone just like Crash. With Marty worrying constantly about the state of his family and his marriage, Cohle is headed into the lion’s den with a bunch of racist bikers. 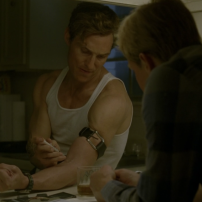 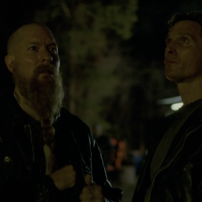 In this scene we’re treated to the single greatest tracking shot ever in television history; a whole six minutes which brought this series an Emmy, or two. Cary Fukunaga makes magic happen. We literally ride along with McConaughey’s Cohle in the face of danger, moving through the hood as the Iron Crusaders involve undercover Crash in a terribly dysfunctional scheme that goes bonkers haywire in the middle of it all.
The whole thing kicks off with Crash proving himself all over again, ingesting more drugs than some normal folks might be able to handle, sitting in with Ginger, Mitch (Joshua Leonard) and other hardcore bikers. When they first get into the target area, things go smooth. Shortly afterwards the whole job goes sideways. One of the Crusaders blasts a black man they’d taken hostage, and all hell breaks loose quick. Trying to keep things from getting completely fucked Crash Cohle is forced to reveal himself to Ginger, taking the biker as his own hostage. He gets on the phone to Marty, who waits not far off. Just in the nick of time, floating right beyond harm’s reach, Cohle gets himself and Ginger to the car, then Marty takes them out of there, as police helicopters and gunshots make the place sound like a ghetto symphony. Now they’ve got a means to an end; that end is Ledoux.

One of the greatest episodes, if not the greatest of all, in the entire series. Fukunaga does a lot of great stuff, but almost none better than this six minute sequence, this feat of filmmaking. Took hundreds of crew to pull off. Makeup artists had to apply touch ups and bits of character work within seconds, as cameras focused themselves on other things. A truly amazing bit of television. Next episode is titled “The Secret Fate of All Life” and continues us into the second half of Season 1. Things are really going to get deep now.