Mac (Logan Marshall-Green) is naked with a shotgun protecting the house, sending Joni (Jodi Balfour) into a craze. He’s out into the streets, hunkered down behind a parked car. Is it a real threat, or is it PTSD? Hard to tell with his life.

Eugene Linwood (Christopher James Baker) is locked up because of what he did on the bus last episode. Trusty ole Karl (Edoardo Ballerini) listens to him talking to his racist buddies on the outside. Sounds like deals are being made. Linwood and Credence Mason (Ólafur Darri Ólafsson) are making greasy moves behind the scene.
Oh and we get back to Buddy (Damon Herriman), one of my favourite characters! He’s got personal troubles though, and he nearly gets into a big mess at a gay bar. He definitely has an addiction, to a few things. His mother Naomi (Ann Dowd) tries her best to help him even if he doesn’t take it.
At home Mac is trying to smooth things over after his crazy episode. He can’t even remember any of it. That’s rough. I feel bad for both of them because a) he can’t help doing something he does not remember, and b) a shotgun could’ve killed her. So, yeah, it’s a double-edged sword that war veteran trauma. In other news, Mac does what he can to look after Marcus (Joshua J. Williams) in light of all the racial violence lately. They actually bond a bit. The kid brings up “Quan Thang” wondering whether it was a mission. He roundabout wonders if his dad was a hero, or something else. He doesn’t yet understand being a hero and being something else aren’t inherently separate; sometimes heroes are stained. 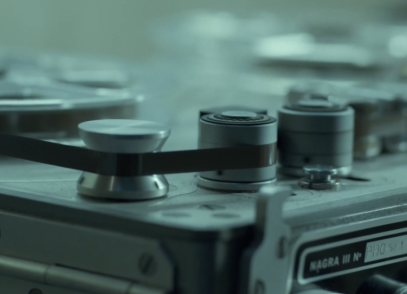 Another character I couldn’t wait to see again: Oldcastle (Tom Noonan). He fields some calls in his backroom plastered with various photographs. He’s got himself work. Looks like Eugene Linwood is marked as a target by The Broker (Peter Mullan) because Oldcastle’s got a little kit ready, gloves, gun, map of the Greater Memphis Area. Y’know, tools of the trade.
At the police station, Detectives Tommy Olsen (Josh Randall) and Verne Ratliff (Happy Anderson) get a little information on Suggs, the man with one leg, like an old Western plot. Although Verne’s more excited about it than Tommy.
Moses (Mustafa Shakir), as it turns out, is a bassist, jamming in the studio with a band. Laying down a nice groove, horns, piano, the whole bit. Only it’s a bit of a misunderstanding, he gets tossed for some white guy. Just another example of guys like him who try to do honest work and get kicked in the ass for it.
Lots of music now, as Mac flicks through vinyls in a record store. He picks up a Spirit of Memphis album. At the same time The Broker calls. That’s kind of creepy, and impressive. Job time. They meet at Tom Lee Memorial Park. The Broker goes on a bit about his story, but they’re meeting for business. The kit Oldcastle put together goes to Mac: Linwood needs to die. Certainly when Joni finds out she isn’t happy. And who would be? The ball’s rolling with The Broker, so it can’t stop now all of a sudden. Still it can’t be easy for her to sit by and let him get in deeper.

Dt. Olsen is drinking and chatting it up with Sandy Williams (Kaley Ronayne), which gets closer and closer to becoming more than just a friendship. Until they fall into each others arms. And so what does that serve? Well, I feel like Tommy only gets more determined to try and figure out what really happened to her brother Cliff.
Other people getting closer includes Ruth (Nikki Amuka-Bird) and Felix, a.k.a Moses. Even if it’s under false pretence. This gets a little tricky, too. Particularly when Linwood’s been released and racial violence threatens the streets. A curfew’s enacted. Meaning Moses can’t go home and has to stay over at Ruth’s place. He does prove himself worthy by helping Marcus out when the police come around talking a lot of “boy” shit. Excellent, if not very tense scene. Great acting. Also a really nice lesson on racial politics, as Marcus wonders why things are the way they are, and Moses relates that it’s something, unfortunately, they have to get used to; sad how things haven’t changed, barely a bit outside certain laws. That doesn’t stop the same type of sentiments from thriving.
Oh, Mac. He’s off to do the latest bidding of The Broker, picking himself up a vehicle from Oldcastle’s car lot. This time a pickup truck. And then off he goes. Simultaneously, Lloyd (Skipp Sudduth) is looking over Mac and Joni’s place, checking things out to see how it might sell, what needs to be done, so on. This leads to Joni realising Mac actually went to Lloyd, to try and get out of debt without having to kill again. So she knows he’s at least trying in that sense. And Mac doesn’t know Joni is trying to sell the house.
Back to Buddy, yay! Naomi and Buddy are like their own show, love it. She goes on and on about Linwood, saying what we all feel. Instead of playing Bingo with his mother, Buddy cuts out a “proposal” that looks like a ransom note.

Listening in on Linwood we find Karl hears him say he’s going to Cesar’s, a redneck bar. Mac follows him in waiting for the right time. He follows Linwood away from the bar. He shadows the man’s ever move. Soon enough he finds Eugene doing some sneaky things at the school bus terminal. Mac gets the drop on him as he plants a bomb under one of the seats. He beats the life out of Linwood, leaving him on the bus, then shoots the bomb triggering a huge explosion. Massive. It throws Mac to the ground, luckily not killing him. He manages to get out, watched at a distance by another of The Broker’s insurance agents, Mary (Aoibhinn McGinnity).
Another job done. The Broker’s informed and another stack of cash taken off ole Quarry for his debts. Closer to the finish line, and further than neck deep in shit. Again quoting President Calvin Coolidge from the monument to Tom Lee: “His good deeds were scattered everywhere that day and into eternity.” A fitting testament to the actions of Mac Conway in this episode. And all episodes.
Yes, he’s killing. But sometimes, can the killing be good? 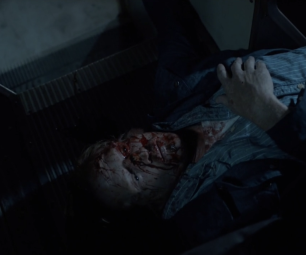 Another beautiful chapter. This one written by original novelist of the series upon which the show is based, Max Allan Collins. Next episode is titled “Carnival of Souls” and I love that they named it after one of my favourite films of all time, the Herk Harvey classic.