Certain films need their elaborate style and screenplay in order to elicit the wanted response. Others make perfectly do with a more minimal and simplistic style, opting to use that bare bones ethic to do wonders. In 1962, Herk Harvey took a break from making industrial and educational shorts, as well as documentaries, to direct the only single feature film of his career: Carnival of Souls.
Now, don’t get me wrong: I love the story, the execution, all of it. I don’t think that you can watch this flick without paying attention to how great a job Harvey did as a director in terms of stretching the budget every inch possible while still making the whole production work to the best of its ability.
Harvey’s unexpected cult classic was the precursor to George A. Romero’s Night of the Living Dead and to a lesser extent Eraserhead from the twisted mind of David Lynch. Not to mention probably a dozen other movies; those are simply the closest ones after this picture. Carnival of Souls doesn’t need any blood, it came before the genre exploded and some horror relied too much on the jump scare. On – approximately – $33K Harvey filled his tale of life and death with enough atmosphere, creative camerawork, and unnerving imagery to match that of five films. If you don’t find it scary, that’s fine; to each their own.
But me? I still see those pale faces sometimes when I’m looking for things lurking beyond the veil of darkness. 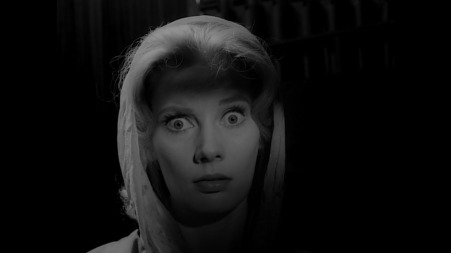 Low budget and a minimalist approach can sometimes push a director to make smart, economic choices which in turn make a film better as a whole. Harvey’s use of light and shadow is impeccable. Along with the makeup, this creates an otherworldly black-and-white film that feels akin to watching one of your own nightmares; maybe one from when you were a kid, one that plays all grainy in the back of your mind while you try and remember all the little bits and pieces. Right as the title ripples onto the frame over the water of a river you can feel yourself dropping into another place, another time. The graininess of the movie’s look isn’t a hindrance. It’s part of the charm.
Another large part of that charming effect is the score from Gene Moore. It’s all done with an organ, and that’s cool for a couple reasons. First, it fits with Mary (Candace Hilligoss) being a church organist, so that is kind of fun switching from music in the movie itself played by her character to the actual score; a seamless move between the same instrument becomes an interesting aural aspect. Secondly it’s a spooky background that pulls the viewer into the gloomy, morbid – though fascinating – atmosphere.

Perhaps the best of Harvey comes in his directorial choices. For instance, in the scenes involving a moving car he opted not to use rear projection; this was, at the time, an industry standard for such scenes. Instead of that Harvey had these scenes shot with a hand-held, battery powered Arriflex camera, so that the scene could literally be shot in an actual car. Of course at the time these cameras and some of the techniques Harvey used were mostly involving newsreel footage, so on. These scenes give the film a nice look, different compared to other similar films at the time. On top of that, there was no need for composite shots in the car scenes, driving the already tiny budget down further. Harvey – always with his eye on the prize.
Aside from that there are a bunch of gorgeously conceived shots, too. The whole script began from Harvey seeing that old empty pavilion from the carnival, it’s only natural a big part of the movie would end up being centred around specific imagery. One shot I can never get enough of is a weird yet effective couple cuts, as we see Mary staring out her window while we cut and zoom closer, closer into the deserted carnival, to a strange, ghostly view of an empty, foggy boardwalk. It’s moments like these where you realise Harvey was firing on all cylinders.

Aside from Candace Hilligoss, none of the acting is anything special. However, they don’t have to be, and she carries the full weight of the story, as her character Mary is the centrepiece. Her performance reminds me of a cross between Maria Falconetti from The Passion of Joan of Arc, and what we’d see in Judith O’Dea’s character from the later groundbreaking Night of the Living Dead (as I said, Harvey definitely influenced Romero to a degree). Hilligoss appropriately leaves the viewer feeling in a state much like her character: dazed, lost as if wandering a dream. Without having to need dialogue, she does best when it’s her face, her eyes, the body language talking; she emotes so well that the performance works in conjunction with Harvey’s directorial choices to give the film that penetrating atmosphere of absolute dread. Oh, and it doesn’t hurt that Harvey himself plays the quietly terrifying man whose pale, horrible, grinning face haunts Mary; the makeup is so perfect, falling in line with the film’s minimalism and working incredibly with the dark shadows of the black-and-white cinematography. He doesn’t even have to speak and yet the pale-faced man is nightmare fuel.
Carnival of Souls doesn’t feel like it was shot in three weeks, even if it feels rough around the edges at certain points. What Herk Harvey accomplished was making of the best psychological horror movies there has ever been, all without falling into any of the conventions the genre would later become known for, to our great dismay. We watch Mary’s descent into madness with the eerie man and his similarly unnerving friends creeping along the periphery of her mind, and vision, almost constantly. This is one of my all-time favourite film, especially horror. But on admiration alone for Harvey and what he did, it’s still a great piece of independent cinema, one that ought never be forgotten or underappreciated.