New man Brian (David Morrissey) has found himself back with old pal Caesar (Jose Pablo Cantillo), who’s moved on to other places, made new friends himself. The one formerly known as the Governor reveals bits and pieces of himself to young Meghan. Speaking briefly of his father, playing chess together.
But how will he survive in this new place, with all that Caesar knows about him? Long as he goes along, they’ll get along. So in the name of helping Meghan, Tara (Alanna Masterson), and Lilly (Audrey Marie Anderson) he agrees to make things work.
What’s scariest? There’s a tank involved now. If he wanted to obliterate anything, he’s got the fire power to do it. Yikes. Let’s hope he can stay satisfied with this little slice of life.

Brian has to go on a supply run with Caesar and the Dolgens – Mitch (Kirk Acevedo) and Pete (Enver Gjokaj). They’re army boys, which is obviously where the tank came from; I wonder if they’ll butt heads with the former Governor. Out in the woods the group looks for a survivalist’s camp, to hopefully locate supplies he might’ve left behind. They come upon a decapitated body with a sign strapped across the chest: LIAR.
Back at the camp another army girl named Alisha (Juliana Harkavy) gets into the military talk with Tara, who’s eager to get a bit of romance going wherever she can. I love her character, and want to see more already.
There are more decapitated bodies with signs – RAPIST, et cetera – along the path as Caesar leads his men to the cabin for which they’ve been searching. The owner blasted his brains over the front of the place. Inside, more walkers to put down. Later when they’re alone, Caesar tells Brian he wouldn’t have let him in if it weren’t for the girl and the sisters. He wonders if the old Governor has changed.
They sit around and drink beer, like back before the fall. Brian avoids talking too much about himself, as the others chat about what happened before the apocalypse came down on their heads.

Things go on as if they were normal at the camp. Over dinner, Caesar tells the women about how he wanted stability, like they had once in Woodbury. Tara and Alisha go off together for a bit of fun. Awhile later, Caesar and Brian go for a few more drinks, smacking golf balls out in a field. We see and feel the resentment, for what the Governor did before.
Not everything changes, no matter how hard he’s tried to turn into somebody new. When Caesar expresses a desire to have him take a bit of leadership, Brian whacks him on the head and tosses him to the walker pit.
The Governor: “I don‘t want it”
Things get nasty when Pete decides to take leadership, he and Mitch are pretty forceful; the latter most of all. But it doesn’t sit well with everybody, others want to vote for who leads. For now it’s left as is, and the day proceeds as usual. Out on a run, Brian faces more pressure to help lead, as well as to abandon his morality like he did as the Governor. It’s not the life he wants to be living. Luckily, Pete is more of a good guy than his brother who doesn’t have many morals left himself.
Afterwards, Brian tells Lilly they need to go. He starts packing in a rush, he knows they’re not safe with the brothers. They head into the night, along with Alisha. Not far, though. On the road out they find a muddy pit of walkers blocking the way. A hideous and crushing sight. They have to turn back, find another way out of their predicament. 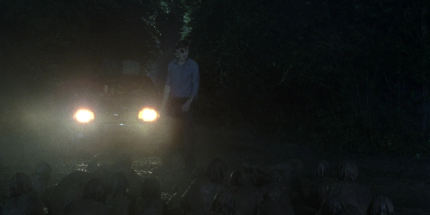 Lilly: “What are you doing?”
The Governor: “Surviving”
Brian goes to see Pete for a talk. Or rather, to kill him. When that deed’s done he goes to see Mitch with a gun. They talk a bit. We see the old Governor slip out of Brian’s skin, the lack of morals and his ruthlessness. He reveals more of his past, about his father and brother. Those tiny morsels of his character come to us in the strangest of ways, which I love. Great writing.
At this point, Brian takes over. He offers Mitch the chance to be at his side, to not worry about doing the “right thing” any longer; to just do what needs to get done in order to live. The brother agrees to cover up Pete’s death, using a noble story of his saving them on a run. A nasty guy, two nasty guys. Maybe even the NASTIEST.
Life continues at the camp, as Brian exerts his influence and Mitch plays along. Everything goes smooth. But essentially, he killed Caesar for nothing. He’s now in power, which he could’ve had with his former friend. Instead he’s chosen another dark path. No surprise. It’s gonna get darker.
We end as the Governor wanders up to the prison. His eye set on Rick (Andrew Lincoln) and the group, their home like once before. More so it’s trained on Michonne (Danai Gurira). He hasn’t changed one goddamn iota.

As I said before, don’t like the Governor. His character is excellent, though; as a brutal villain. David Morrissey plays him well, and seeing parts of his backstory, as well as character development in him is awesome.
Mid-season finale “Too Far Gone” is next. BE prepared for something shockingly intense.