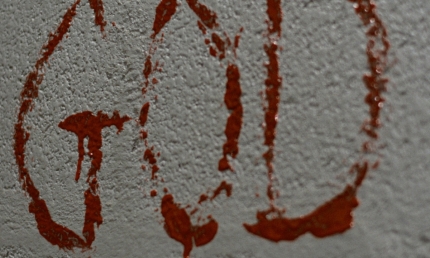 Larry Cohen is king of the indie film, known to cobble together a film crew and a screenplay and hit the streets of New York, guerrilla-style to make a movie. He put together Q in the matter of a week’s worth of pre-production, after being fired from another bigger budget picture. He directed It’s Alive during the weekdays and directed Hell Up in Harlem on the weekends. He created the late-1960s TV series The Invaders but wasn’t allowed to run it after giving the studio an outline. He works on the fly, usually dictating scripts into a recorder rather than writing them. He’s a maverick.
Probably why God Told Me To works. In the hands of any other filmmaker this could’ve easily become laughable. While Cohen takes it to the brink, there’s an underlying satire that isn’t comedy, it’s brutal, seething, horrific blasphemy. And it’s utterly intoxicating.
The film tells the story of a New York City police detective, Peter J. Nicholas (Tony Lo Bianco), who stumbles onto a case of random killings, starting with a sniper on a rooftop, in which the killers all have the same motive: “God told me to.”

One of Cohen’s unique, lovable traits is his ability as a writer to cross genres. He does particularly well with crime that becomes horror. Here, he also tosses in science fiction. On top of it all? The deep satire of religion. At the centre of the film Cohen asks: what if God’s not only real, he also doesn’t necessarily have our best interests in mind? Just as H.P. Lovecraft and other classic horror writers before him, Cohen depicts the creator of life on Earth into a sci-fi God, an extraterrestrial being, as an indifferent one, uninterested in the good or bad of human beings, and more interested in experimenting, toying with the species.
For all its science fiction-horror strangeness, God Told Me To is like a metaphor of how God would truly work, based in (a kind of) reality. A literal look at religion, via pseudoscience. If God were real, and Jesus the representation of his Father on Earth, he’d be a hermaphrodite, in that we see him, somehow, as a man, but on the other side he’s capable of creating life, something only a woman can do by science. Sure, aliens are a wild concept, too. But tangible lifeforms are more plausible than an invisible entity in the sky.
Juxtaposing a devout Catholic NYPD detective against the senseless murders on the city’s streets willed into being by a hermaphrodite Jesus figure is the perfect perspective. Cohen’s film is the realisation of God’s violent will in the corporeal form, as well. One based not in scripture and faith and mythic figures, instead based in the wide reaches of science, and right on the actual streets with guns and death. If God were real, the world would be a mess because he’s a tyrant, a violent cult leader, an authoritarian ruler leading by iron fist.

Best of all, God Told Me To is blasphemous, in the most wonderfully genre sense of the word! Cohen pulls out all the stops, in perhaps his weirdest film; and that’s saying something, considering Q, The Stuff, It’s Alive (and its sequels). But goddamn if it isn’t true! First is the parallel between the events of the film, the murders compelled by God himself, and the Biblical tale of the Binding of Isaac; in which God called for Abraham to sacrifice his son. Except Abraham, at the last moment, decided against it. Here, God tells people to kill, and they kill, usually on a large scale. One story twisted in delightful blasphemy.
After that is the virgin birth. Jesus’ mother Mary gave birth after the Immaculate Conception. AKA God slipped into her room and raped her, essentially. But anyway, Cohen once more blasphemes by symbolically having another sort of invasive conception occur, this time with a woman abducted via spaceship, impregnated with alien seed. Later to birth a half-alien, half-human, similar to Jesus being half-human, half-divine. The second blasphemous contortion, again working very well.
Finally, the best of the blasphemy is saved for last. When Dt. Nicholas comes face to face with the alien saviour, E.T. Jesus, a cult leader played by Richard Lynch, he is faced with further twisting of the Biblical order. This Jesus-thing wants to propagate a new species on Earth. He takes the idea of God/Jesus as creator, an entity with the face of a man yet capable of life, and turns it into a literal slice of body horror: Lynch’s character lifts his shirt to show a vagina-like orifice in his side. This is a blasphemous image altering the wounds of Christ, where the Spear of Destiny pierced his flesh, into a sex organ. Devilish, gross, perfect.

Certainly not for everyone – though, the same could be said about several titles in Cohen’s filmography – God Told Me To is a satire, but a deadly serious one. The story takes science fiction, horror, mystery, religion, throws it one melting pot, and out comes some of the greatest 1970s genre cinema available.
Easy to imagine this film can divide people. Not only its subject matter, the whole thing is pretty damned wild, from the writing to the execution of its themes, imagery, and more. But if you really get into it, digging below the surface, it isn’t merely Cohen writing to be weird or offbeat or unique. This genuinely feels pulled out of his gripes with Christianity, in the sense that most organised religions are manipulative, exploitative, they operate much in the same vein as cults and their leaders. So, at its base, God Told Me To is like Cohen’s rage taking form in a genre flick, piercing to the core of faith and belief.
This isn’t full-on horror, it’s got the makings of more an apocalyptic-thriller than anything else. Still frightening in its own ways. A quirky, eerie bit of cinema for any time you’re feeling the need for something wholly unique. Take the chance this October, put it on and let Cohen’s indie wonder pull you into its grip. Feel the existential, cosmic horror Cohen hopes to instil. Because it is fan-fucking-tastic.