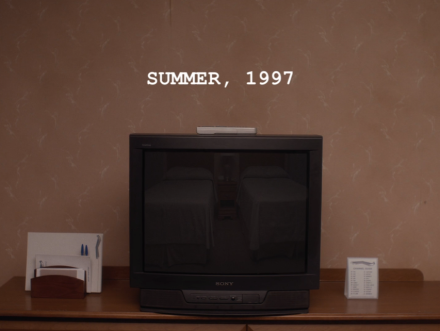 Summer, 1997. Anish (Karan Soni) arrives at Room 104 in the motel. He got a call from a literary agency, he’s excited. He calls his mother Divya (Poorna Jagannathan) and leaves a message to call him back. He’s taking his time at the motel to work on the book, readying himself for the big pitch at his meeting.
A stereotypical writer, listening to a book on tape about how a “writer just writes” ironically, hilariously. Very ’90s-style thing, especially coming out of a portable boom box. He can’t find his laptop, so he calls mom back, wondering if it’s there. But he has to leave a message again.
He waits and waits, right through until morning. Finally his mother calls back, she doesn’t even realise she has an answering machine. Not all that technology savvy. He needs her to find the computer, that “little black folding machine.” She eventually finds it, even fucking with him before telling him.
So, what will they do? He needs a copy of his book, to work on. She doesn’t see how she can get it to him other than through the mail, she’s not “David Copperfield” after all. This means getting her to e-mail it. Oh, lord. 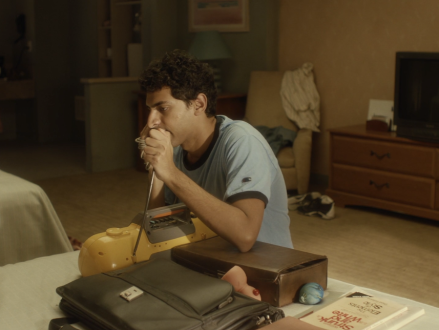 Anish goes about trying to explain to Divya how to do everything, starting with opening the laptop and turning it on. It’s hilarious from our perspective, in 2017, watching him go through the agonising process of it all with her, as she laughs about all sorts of things from the double meaning of “windows” to even the working title of his book, Gently Through the Current.
After a while she’s tired, she wants to do it another time. Obviously he’s freaking out, she just can’t understand the reason why he has to get her to send the book. She brings up “Future Dinosaur,” a story he wrote at thirteen. A sci-fi story she suggests pitching at his meeting. Anish is utterly dejected by the whole thing, also believing his mother’s hating on the title of his novel.
He gets her to keep going, she finds the file with his novel. They move through the process, step by little step. When they get to her trying to copy the text, she accidentally deletes the whole thing. He gets real angry, trying to get her to undo it rather than the novel disappearing forever. Never knew this could be such a tension filled moment, watching somebody explaining the copy and paste function.
She does the wrong thing, again. And it’s all gone. He tells her to take it to the store, to the Mac people, so they can restore it. She belittles his writing, calling him down for believing his novel as his “life‘s work.” She can’t possibly understand, she only laments that he didn’t become a lawyer, a doctor, or something else desirable. 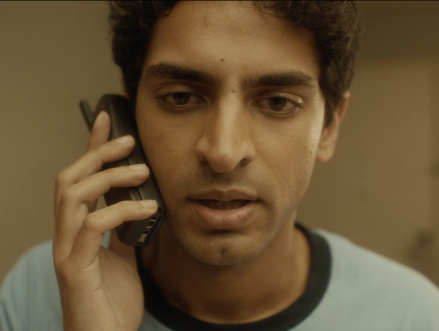 This sends them into a huge argument, he yells at her. “I just want you to be somebody,” she yells back. Divya says he’s “just like her” out of nowhere. He doesn’t understand. She immediately tells him not to worry, apologising, offering to take the laptop to get it restored.
After that she reveals the truth about a girl named Heather, nineteen years old. She had a troubled life. A smart girl. She got pregnant, her family turned their backs on her. Divya took her in, looked after her and the baby. Then the girl ran away, she was left with the boy.
That boy is him.
He’s shattered, quite a bit. Also still upset about his novel. She says she loves him, that she’s sorry for everything about the book. He confesses now he’s worried it won’t be any good. The whole phone call has exposed so much, from family secrets to his own inner thoughts. He has to find a way to move on from this moment. 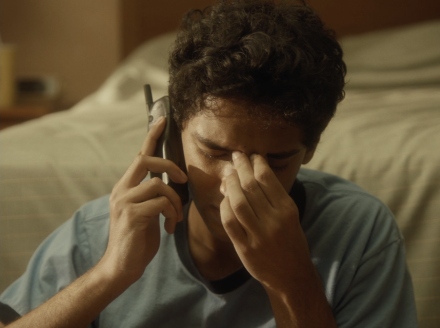 This prompts him to use his imagination. He lies in bed, seeing his words written across the ceiling. In a way, cutting himself off from technology, as well as off from the rest of the life he thought he knew, is a way for him to get back to himself, to the art of writing, using his mind. Somehow, the revelation of that phone call changed his life, for the better. 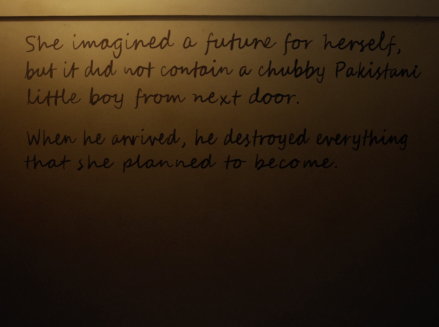 I loved this episode. Best Room 104 yet! Amazing, just a strange way to bring out these themes, and it’s totally unique. Mark Duplass with some fascinating work.
“Voyeurs” is up next.