Michael (Landon Liboiron) and his crew, including Wahush, canoe over the waters with their stolen pelts in disputed territory. They work quickly to avoid detection. In the meantime, Governor Chesterfield (Evan Jonigkeit) is back at Fort James, trying to find Declan (Jason Momoa) who’s stuck somewhere within its limits. Unfortunately for the big man, Charleston (Demetrius Grosse) and McTaggart (Jamie Sives) are in the clutches of the redcoats.

“Don‘t be naive— no man respects a whore.”

Poor ol’ Grace (Zoe Boyle) is navigating so many tough waters at once, between the Governor as her rotten husband and Imogen (Diana Bentley) believing working in the sex trade, by force, gives her some kind of respect amongst the men of the fort. It’s all a real mess. Not to mention she runs into Declan out in the streets.
Getting tortured, McTaggart is pressured because of his military service, deserting his post, and he nearly gets one of his most precious appendages chopped off. That is, before Imogen shows up. She’s been keeping an eye on Grace, which doesn’t bode well, seeing as how she’s running around in the shadows with Harp.

Speaking of, Declan advises Grace leave Ft. James. It’s also overly clear, as it’s been a while, that they’re in love. He runs from it, and she does a bit, as well. But in the end they’ve fallen into each other’s arms. Right as the Governor and his men are outside, searching for the half-Native, half-Irish rebel. He’s ready to go HAM. She goes out to confront her husband, who’s giving the ale house over to Imogen and putting her under arrest: “Until death do us part, Grace.” That’s fucked up.
Sokanon (Jessica Matten) is accompanying the young Veronica (Star Slade), coming upon her people’s land. She tells them of what is happening to their people, their girls and young women, what the white man is perpetrating against them— not only violence, sexual violence. What’s most interesting to me is the relevancy, the timeliness of this story being told, as what happened to this young Native girl is the same as what Canada’s government did to Indigenous peoples with the residential schools. “Child, you‘ve had your tongue stolen from you,” Kamenna (Tantoo Cardinal) tells Veronica, which you can bet is a white name given to her by ignorant caveman who couldn’t bother to learn pronouncing her real one.
In Montreal, Elizabeth Carruthers (Katie McGrath) is found beaten to death in the dirt. Douglas Brown (Allan Hawco) is left reeling, knowing Samuel Grant (Shawn Doyle) is behind her murder. This leaves him and Malcolm (Michael Patric) to put their heads together. They later find out Josephette (Karen LeBlanc) runs the company even though Douglas owns it after Ms. Carruther’s death. Certainly puts a knot in things. Soon, they come to an agreement, all three working together so Grant doesn’t get what he wants after his hideous act of violence.
Meanwhile, in the woods, Cobbs Pond (Greg Bryk) leads a party of people, including Clenna Dolan (Lyla Porter-Follows), to where Elizabeth was supposed to be meeting Harp and his people. Hmm, I wonder how that’ll go over. Already feels sketchy when Michael comes ashore, finding Clenna and Cobbs waiting for him. The young Irishman is shocked to hear Elizabeth is dead, now he’s left to make a deal for the pelts with Cobbs, proxy for the wealthy, ruthless American.

The situation between Grace and Chesterfield is intense, scary. He rages at her, figuring out that she and Harp are involved. But she isn’t going to take his anger, she won’t let him run her over. And she is not prepared to give up her connection to Harp, either. Even if it puts her in a terrifying predicament. Although she says now she’s leaving the fort, never to return.
Cobbs continues pressing Michael, who won’t budge. When Sokanon arrives she isn’t pleased to see Harp isn’t there with her man. Doesn’t make things any easier. She won’t give over her share of the pelts, whereas Michael wants to sell them and at least make something for their troubles.
Still being tortured, McTaggart won’t give an inch to his torturer, no matter if Charleston urges him to just talk and get it done. That’s because he’s luring the man in, so that he and Charleston can get themselves free. Hard bastards! Dig it.
In other hard bastard news, Lord Benton (Alun Armstrong), Chaulk (Kathryn Wilder), and Mr. Darragh (Joel Thomas Hynes) are rowing ashore, having set into motion their grand mutiny with just a few easy strikes. What’s next for this shabby trio? Well, Chaulk ends up at the ale house, which is getting even more brutal than before with Imogen left to run the place. Mary (Breanne Hill) is forced into prostitution. Only she seduces the man looking to force himself on her, long enough to put him out like a light and toss him in the cellar. Proper.

On the shore, in the mist of the shady deals, Clenna shoots Wahush right in the chest. He dies right there in front of Sokanon, telling her there are redcoats heading up through the forest, too. Sokanon is ready to kill Clenna, the only thing preventing her being Michael and a bunch of guns pointed at them. A bit of silver won’t change Wahush’s death.
That hard as Siberian bounty hunter Vlad (James Preston Rogers) hasn’t died, he’s back in Fort James, looking to settle his score with Harp. Our big rebel warrior is intent on getting away with Grace, but he has to face the Siberian first; at the same time, Chaulk takes Grace away by gunpoint. Holy fuck. Vlad and Declan beat each other mercilessly, two hulking monsters throwing each other through windows, tables. They fly into the ale house, where the Governor and the redcoats are drinking. Everyone lets them fight. Vlad gets the upper hand, beating Declan near into the dirt. Until he sees Grace from the corner of his eye, Benton escorting her away from the place, giving him strength. He overpowers Vlad, biting off his nose and impaling him on his own spiked armour. Sadly he’s left at gunpoint, the redcoats surrounding him on every side.
Everyone is torn apart. Michael and Sokanon are divided. Grace is in the clutches of Lord Benton and Darragh. And Harp, he’s again captured by the British, left in an utterly helpless position. Before Chesterfield can put a bullet in him, Harp tells him that Benton is there. This prompts the new Governor to let Harp chase down their mutual enemy, putting two enemies together fighting a common goal. Maybe Chesterfield has a heart left in him after all, somewhere deep down. 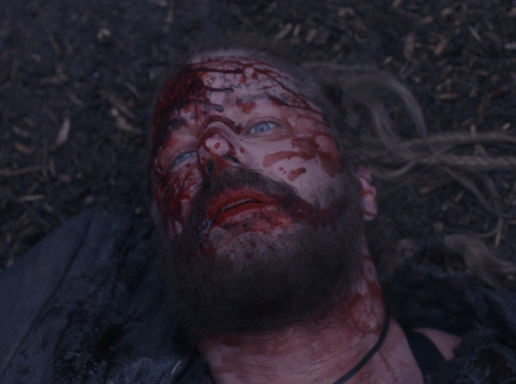 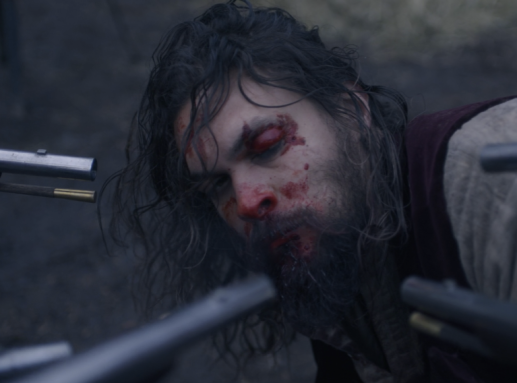 BRING ON SEASON 3! This season really picked up steam the further it went, so I’m glad to see a different outcome than Harp locked away, captured like before. Changes the game, in new ways. Can’t wait to see what the team behind Frontier does next year. They’re into production now again in my home province of Newfoundland and Labrador. Prime time coming up for the snowy cliffs, all that stuff. Wonder if they’re going to take some of the action further, across the pond?
We’ll see. Biting my nails already.