“Black holes are considered to be the hellmouths of the universe“

Beginning with whom we can only assume is H.G. Tannhaus narrating, discussing time and space and where people, matter, goes when sucked into a black hole, this episode starts using the Trinity Knot a.k.a triquetra as part of its imagery. The stranger (Andreas Pietschmann) looks to have an elaborate back tattoo related to said imagery— it’s actually what’s known as the Emerald Tablet. 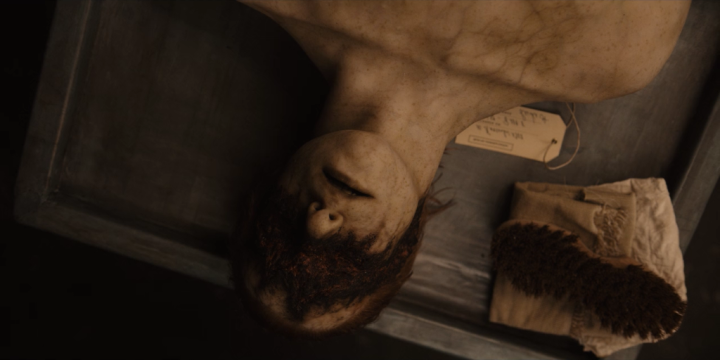 The relationship between Peter (Stephan Kampwirth) and Charlotte Doppler (Karoline Eichhorn) looks really strained, as if they sleep in separate rooms, let alone separate beds. What’s his deal? He’s got some secrets, there’s no doubt. Then they’ve got their daughters Franziska (Gina Alice Stiebitz), older, more volatile, and Elisabeth (Carlotta von Falkenhayn), deaf, frustrated with her own family a bit. Peter goes to see his father Helge (Hermann Beyer) in the home; I wonder what his father’s role in all this is, how his story in ’86 connects to now. The old man certainly knows something. And Charlotte’s doing a bit of unofficial detective work while bringing Elisabeth to school, as well; the little girl’s stupid, either, she knows her mother’s being sneaky. I love their relationship, we get to see a little in this episode.
Hannah Kahnwald (Maja Schöne) is trying to keep a relationship with her son, Jonas (Louis Hofmann), though he’s clearly going through his own personal turmoil, as we’ve witnessed. He goes back up to the cave, that map from his father’s suicide room in hand. He’s going in alone, which isn’t so smart. Even less smart with the stranger not far, watching him.
Charlotte has the medical examiner take a look at one of the dead birds. She’s also running everything connected to the case of the missing kids, Mikkel, through her mind. She can feel there’s a connection. But where, exactly? In the meantime, Jonas is probing through the caves, looking for his own answers.
At home, Ulrich (Oliver Masucci) and Katharina (Jördis Triebel) Nielsen aren’t totally on the same page. She knows he isn’t telling her what’s actually going on in his head. At the same time they’re both worried for their son. On top of it all they can’t get a warrant to search the nuclear power plant, and it’s “been nearly 36 hours” since Mikkel went missing. Time is not on their side.

There’s just more and more to worry about with Peter, all the time. He’s stressed over a bit of dirt on the floor of his car, the mat in the driver’s side; near to tears. Then Charlotte calls, wondering why he called the night Mikkel disappeared. He tells her he was working late. But it’s obvious to us, and likely her, this is not the case. What I dig is how the writing is really playing with us here. There’s something hidden in Peter’s life that is troubling. Obviously we know Mikkel’s not dead, he’s back in ’86, somehow. So, WHAT THE HELL IS IT, PETER? Fess up, man.
So we see Charlotte’s tracking down her husband’s whereabouts. He goes to see a sex worker, suspecting Peter was with her; I believe she’s transgender, not positive. Either way, she confirms that Charlotte has a husband with a “dill pickle” penis, and that’s enough proof. A sad encounter. Now we know the man’s hiding his infidelity, and possibly his questioning of his sexuality, too. This is further confirmed when Magnus (Moritz Jahn) follows Franziska to her ballet rehearsal, meeting her in the change room afterwards when she rails on about the secrets of their little town.
Charlotte hears from the medical examiner. The bird’s ear drums were obliterated. It also took a hard nose dive into the ground, possibly electromagnetic interference. Although no signs of any abnormal radiation. Very strange, though the ear drums relate to the dead boys. So her curiosity is peaked. She goes to the hatch out in the woods, heading down into the bunker below. After that she gets a call that sends her up to the plant itself. Seems Ulrich was found on the property, and he’s, well, beat up.

Meanwhile, little Elisabeth thinks nobody’s coming to pick her up, after mom finally calls dad to tell him to go get her. So she heads off on her own, in the rain. At the same time ole Helge slips out of the home into the bad weather, repeating: “Tick tock, tick tock.” Oh, my. A little deaf girl and an old, ill man out in a rainstorm. This isn’t shaping up well, at all. Charlotte finds her daughter’s hat in the road, and nothing else. Another missing child? They’ve at least found Helge, after he stumbles onto police out searching. The old man says he must tell someone to “stop.” That’s pretty curious.
Not long later Charlotte walks into her house, soaking wet. She says she met someone on the way, who gave her a gold watch. Somebody named Noah. He said the watch once belonged to Charlotte. Sure enough, inscribed inside is her name.
Is the stranger named Noah? Or is Noah someone else entirely? Regardless, what’s the stranger mean in the grand scheme of it all? Who is he? We know one thing: Helge knows Noah.
Out in the woods, a deaf boy walks alone. He comes upon a figure made of acorns. The stranger, the hooded figure arrives. He says Noah sent him. Oh, lord. What exactly will happen with the ritualistic torture if it happens to a deaf child? The ear drums won’t be affected, right? Disturbing, and compelling, and oh, it’s killing me. 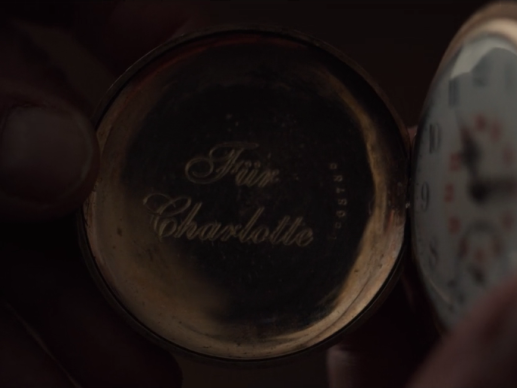 This series is just too fantastic. Trying not to binge so hard, it’s really difficult. One of Father Gore’s favourite shows of 2017, without a doubt.
“Truths” is next.

C.H. Newell is first and foremost a passionate lover of film— especially horror. He's also a PhD candidate at Memorial University of Newfoundland with a concentration in postmodern critical theory and Queer Gothic. He wrote for Film Inquiry frequently during 2016-17, and is currently contributing to Scriptophobic in a column called Serial Killer Celluloid focusing on film adaptations about real life murderers. As of September 2018, C.H. Newell is an official member of the Online Film Critics Society, and as of April 2019 he's currently listed as a Rotten Tomatoes-approved critic. He has covered major film festivals such as Fantasia Festival (2019, 2020) and Fantastic Fest. During September 2019, Father Son Holy Gore was one of several media outlets helping to present Randfilmfest in Germany, & will be once again in 2020— Newell will also serve as part of the jury for the prestigious Randfilmfest award.