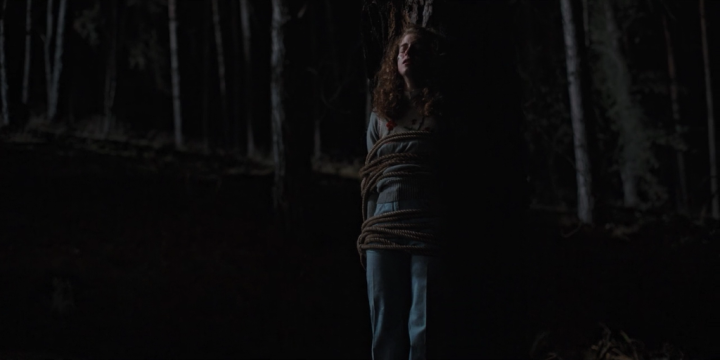 Love the title of this episode, as it goes back to the sort of Celtic symbol, whatever it was, and the tattoo on the Stranger’s (Andreas Pietschmann) back of the Emerald Tablet of which the words “Sic Mundus Creatus Est” are a part. Look it up here.
A girl is lost in the woods, she calls out for young Ulrich and Katharina. But nobody answers. Not far off is the entrance to those caves. Waking up, we see it was Regina Tiedemann (Deborah Kaufmann). She wakes, asking her partner to tell her “everything‘s all right.”
That’s one intriguing cold open to an episode that’s name suggests we’re going to see a lot of interesting things. I wonder what’s in store, and how does Regina connect to the rest of the characters, the events?
This little German town is rightfully terrified, everyone is worried about the missing children, another child dead. So Charlotte Doppler (Karoline Eichhorn) is urging people to let the police know about any incidents, even if a child went missing for “24 hours.” Everything matters.

At home, Jonas Kahnwald (Louis Hofmann) asks his mother Hannah (Maja Schöne) how she met his father, after recently discovering Michael was once Mikkel Nielsen, who travelled back in time from 2019 to 1986, beginning an entirely new life. But Jonas doesn’t press his mother too hard. He can barely grasp the concept, let alone telling her about it. Not to mention he’s still playing around with those maps his father had; I assume Michael was trying to discover his own origins, trying to find out who he was before Ines took him in as her own, wanting a child so bad she accidentally rewrote history.
Meanwhile, Ulrich Nielsen (Oliver Masucci) is digging into the files on his missing brother Mads. He looks through the old police records, listening to the tapes, one of his mother in particular interests him. His wife Katharina (Jördis Triebel) is in emotional shambles, as well as trying to protect her daughter Martha (Lisa Vicari), her son Magnus (Moritz Jahn), worried about them after their little brother vanished.
I’m most curious about Regina. Obviously she’s a Tiedemann, she has close links to the town, her mother ran the power plant. We get one brief bit about her when she receives a letter, after undergoing a mammogram recently. All those years around the family business, did it give her cancer? Sadly, yes.
Ulrich goes over to talk with his father, Tronte (Walter Kreye). He asks if Ego knew anything. He believes this is all linked the 1980s, when Mads disappeared. Then he asks where his dad was the night his brother vanished. Mother Jana (Tatja Seibt) says her husband got home late. Dad denies being capable of what he’s suggesting, though there’s a mystery buried there. Tronte leaves, so mother and son chat. She reveals Tronte was having an affair; Mads went missing, he was in another woman’s bed, none other than Claudia Tiedemann, of course. Ah, the family way.

While Martha prepares to perform onstage, Bartosz (Paul Lux) apologises to her. When he tries for a kiss, she’s cold. She and Jonas have rekindled their relationship, which he doesn’t know about yet. Jonas is busy trying to find out more in those caves, using his father’s maps; one part reads FOLLOW THE SIGNAL. And now he’s headed into another cave’s mouth, using the light from the box the stranger left to guide him.
I feel terrible for Katharina. She’s caught between putting up posters for her missing boy and scouring Ulrich’s cellphone bill to find out what he’s been up to underneath her nose. That’s when she manages to find a number, call it, getting Hannah on the other line and confirming what she’d already suspected.
Ulrich goes to see Regina, who was the last person to see Mads before his disappearance. She knew about the affair between their parents, too. She says there’s “no justice in this world” and wishes it were Ulrich who’d disappeared. He has always hated her, because he believes she was the one who claimed he raped Katharina. This is when he finds out the truth, that it was Hannah. OHHH, SHIT. The past is coming to bear on the present in a lot of unexpected ways.
That night Katharina calls a radio station. She claims there is a murderer living amongst their town. “We‘re all so blind,” she says. And in many ways it’s true. Ulrich is finally seeing the truth, confronting Hannah, as is Katharina discovering her true husband. As is everybody. Jonas, as well. He’s seeking the truth more than anybody.

In the caves Jonas finds a tiny red rope attacked to a hook in the wall. He follows it in deeper. Soon he turns on the Geiger counter; ah, the signal! He lets it click away, and he moves deeper through the rocks. Eventually he reaches a panel with SIC MUNDUS CREATUS EST on it, a solid stone, that Celtic-like, runic symbol. He opens it, a wind blows through it, and once he’s inside the door closes behind him.
Where does it lead?
Simultaneously, all the lights at the school flicker as Martha breaks down onstage during her performance. The lights throughout the town flicker. Tronte, he has a book with the same symbol as is found on that door; in it are marked various dates, times. Does he keep track of these events?
Jonas crawls down a long corridor, which splits in two directions at a certain point. He goes down one, then comes to another door like he saw before, the same symbol on it. He opens it and goes through. Then the flickering lights in town stop.
He goes on through to more caves, coming out into the trees. And when he walks a little longer, he sees that he’s gone back to ’86 himself. He sees posters for a missing child: Mads Nielsen. And who should come along to pick him up? His own mother, as a girl (Ella Lee). Damn, that is a headtrip.
In 2019, Ulrich is starting to wonder if the boy they found in the woods, the corpse, dressed as if it were from the ’80s, may in fact be his brother: he confirms it from a story his mother told, a scar Mads had on his chin from when the brothers fought. Never saw that part coming. Holy fuck. 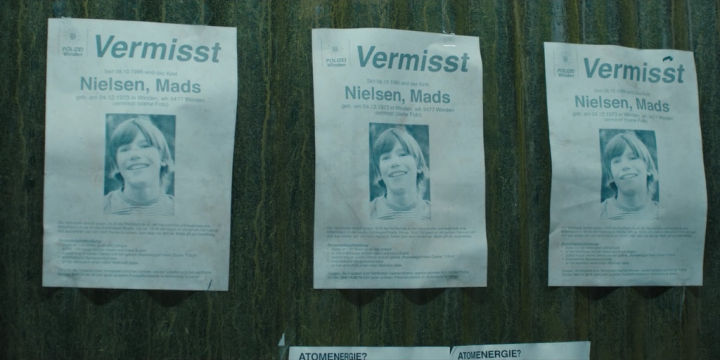 What an episode! Continually gets better, but the way they’ve already told us about Mikkel/Michael and now they’re pulling on more threads is genius. A brilliant show of writing, can’t wait to see more.
“Crossroads” comes up next.