Grant (Grant Chang) is now hunting down Elliot (Rami Malek), in order to snuff him out and cauterise the revolution our hacker’s been intent on bringing about. He and the Dark Army ransack the young man’s apartment, but Elliot is hiding out.
Now he’s worried about Darlene (Carl Chaikin), who’s still handcuffed to a table at the FBI in an interrogation room. She gets a visit from Agent Santiago (Omar Metwally), she’s put into a cable tie and taken away. At the same time Dom (Grace Gummer) can’t find him, nor can she find Darlene. That’s because Santiago is Dark Army, he’s planning to do something sinister. Until Dom finds him in the parking garage. He gives her the usual bullshit, that she’s “not authorised to know” what he’s up to. When that isn’t working he punches her out.

At this point Elliot realises there’s a good chance his sister got caught by the Dark Army. He goes back to the original fsociety hideout. And he’s going a bit crazy, believing his sister will die: “Like everyone else.” So he blames himself for all of it. In a sense it’s true, but it’s not – he is mentally ill, his father, Mr. Robot (Christian Slater) has impeded his progress at every step, from life into death and beyond. He can’t help half of the problems that have trashed his life, and in turn the lives of those involved with him. Which is why Elliot has come to understand he has to learn to work with Mr. Robot; he figures out there’s a Dark Army mole in the FBI.
Speaking of, Santiago has both Dom and Darlene. They’re gone for a drive. A really bitter betrayal for Dom, figuring it all out now, dating back to the assault in China, everything that’s been Dark Army manipulated from within the FBI. “This whole time we‘ve been punching ourselves in the face because of you,” she spits at him.
Elliot goes searching with dad for info on Santiago. That’s when they run into Irving (Bobby Cannavale), always watching. So, yeah, there’s going to be trouble. One way or another. Shit. 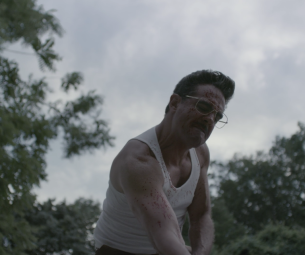 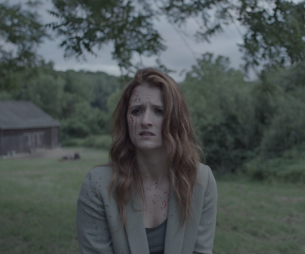 What about Angela (Portia Doubleday)? She’s being kept somewhere, becoming obvious that the one holding her is Phillip Price (Michael Cristofer). I wonder if he’s fed up with the trouble she’s caused him. I’m getting a bit scared for her. When Phillip gets back he reveals everything to Angela, the truth of why he manipulated her. As well as that he was in love with her mother years ago, that he is her real father. She now understands Whiterose manipulated her all along into being part of the doomed revolution, everything else involved.
Out on that farm where Irving gets various things done, he takes Elliot out to the barn where Santiago has the two women. Leon (Joey Bada$$) is there, too. The FBI agent is raging, and he’s not happy with the Dark Army. So, Irving takes Dom and Santiago elsewhere. Mr. Robot wants to get out of there whereas Elliot is staying put, he wants to figure something else out knowing that Whiterose (BD Wong) is watching them.
In the field, Irving gets prepared to do a bit of… wood chopping. But it’s not Dom who’s getting the axe. Nah. It’s the real liability he’s chopping down: Santiago. Then he makes clear to the remaining FBI agent: “You work for the Dark Army now.” She refuses. Irving makes her realise the Dark Army will kill everybody she loves; he even knows all their names. Very disturbing. When he’s done there’s nothing left to Santiago’s head.
At the farm, Grant arrives. When he tries ordering Irving around, we discover the used car salesman was Grant, so to speak, years ago, he’s done time serving Whiterose, intimately, it seems. So Irving says he’s done for a while and needs some time off. In the barn, Grant confronts Elliot. The hacker lays it all on the table, how he owns the Dark Army from the inside out after hacking into their systems. Plus he knows all of their dirty little secrets. However, they’re not enthused. Leon puts a gun to Darlene’s head. Grant puts one to Elliot.
But before anything else can happen, Leon guns the other men down, aside from Grant. Because Whiterose knows that her right-hand man does not understand how valuable Elliot is, and never will. Afterwards, Grant puts a bullet in his own head. Then Elliot helps Whiterose move her shipment to the Congo.

What now? “Undo the hack.”
Unlikely new allies Elliot and Dom get into Sentinel on the FBI’s network. It’s only reluctant, though. The FBI agent is bitter, particularly against Darlene, telling her that she is a terrible person who has ruined her life. And, she’s not wrong. That’s part of why I love Mr. Robot so much as a series. Our protagonist and the other lead characters, whom we love, aren’t perfect, they’re flawed people.
Now, Elliot is finding that Romero didn’t do what they’d thought, that he was only spying on the Five/Nine hack and that they can’t simply reverse it anymore. Somebody else was exporting the necessary “key data.” Later, on the train, Darlene talks about the past, she’s confused by Elliot’s version of events when their dad supposedly pushed him from the window. She claims he went nuts, smashed the window, and threatened to jump out. Seems that his mental illness is even more elaborate than we’ve already known. And he’s been blaming his father for it all this time. Could this help him mend the bridges between himself and his other self? Already he realises Mr. Robot exported those keys. He also further declares he wants to take down that “1% of the 1%” who are controlling, manipulating, destroying lives. Then Elliot starts coming to terms with himself and Mr. Robot as one, which allows him to discover the keys to undoing the hack. It’s all on a burned CD, embedded in family photographs; in an especially memorable one.
Thus ends the Five/Nine hack. How will it go? Can everything be restored when the shadowy Dark Army is still lurking constantly?

In a post-credits scene, Darlene and a sex worker discuss “economic forces” and whether E.Corp getting all their together together again is a good thing. Right as a bunch of tough looking dudes show up outside Elliot’s apartment, where Darlene is waiting. One of whom is Fernando Vera (Elliot Villar). Remember him? The drug dealing gang leader Elliot put in prison during Season 1. Daaaaamn.
Bring on Season 4, baby. Sam Esmail is a genius. Love his writing and his directing, in equal measure. This season was fantastic. Every year it’s like a reinvention of the series, so it’ll be interesting to see something new now, a former part of our hacker’s life coming back to bear on the present. And just as things were going so well!