We meet up with Hitler (Noah Taylor), going by the slightly altered name of David Hilter. He works at a sub shop, Maxi Grinders, where he gets along with his co-workers and is generally well liked. He does pretty well keeping a low profile, though he can’t stop blaming “the Jews” and giving heated speeches about “radical extermination” in the alley out back. Not everybody agrees with his perspectives.
Then one day the Saint of Killers (Graham McTavish) turns up, along with Eugene (Ian Colletti). Hitler’s busy writing up a “four–year plan” to take over the world and command a “New Reich.” Doesn’t matter— the Saint chains Hitler up along with Eugene, and they head out on the next leg of the journey.
In Angelville, Jesse (Dominic Cooper) and Tulip (Ruth Negga) see Madame Sabina Boyd (Prema Cruz) off to the next world, lit up like a Viking funeral on the swamp. It’s a bittersweet kind of thing for the preacher. In the meantime, Herr Starr (Pip Torrens) has turned up with Lara (Julie Ann Emery).
In New Orleans, Cassidy (Joseph Gilgun) is still kicking it with Les Enfants du Sang and teaching them lessons. “Most times today is better,” he tells them, warning not to be too nostalgic. Eccarius (Adam Croasdell) is glad to have his vamp buddy around. The leader of the group shows Cass his very own coffin, should he like to lay his head there occasionally. Our man’s happier passing out in a bar somewhere. Eccarius wants him to turn a member in another “blood ceremony,” but Cass refuses to have any part of it. I wonder, will he change his mind? He’s also finding out Les Enfants have been spreading themselves around the world as “sanctuary” for vampires. This impresses him.

Gran’ma (Betty Buckley) meets with Herr Starr, the latter coming to try and get Jesse out for a bit of messiah work. Only problem is the preacher’s debt to Madam L’Angell. Starr attempts to ingratiate himself to her. But it ain’t easy. She will only take compensation in souls. The Grail just so happens to own a warehouse used as storage for a Japanese company Soul Happy Go Go’s souls. Gran’ma is greedy, too. She wants a ton to let go of her precious Jesse, whom she flicks around like a rag doll. Meanwhile, Hoover (Malcolm Barrett) is looking to “catch a vampire” with some help from the local diocese.
That evening, Cassidy brings Lisa (Lucy Faust) into the vampire fold. He bites into her neck during the ceremony, though he’s got to be pulled away. Part of the whole fear for him, I believe, is he genuinely enjoys human blood. Like a treat. And it makes him hate himself. A parallel to his being a junkie, too. Regardless, he’s getting very close to Eccarius, bonding via vampirism. All this time Hoover’s keeping an eye on them both.
Now Tulip’s got to deal with being sent to Osaka to do the job on Soul Happy Go Go with Lara. She doesn’t like it. She tells Jesse this will bring on some of the ole O’Hare curse. The preacher does his best to give her confidence. What I love about their relationship is he never says typical shit, neither does Tulip want to hear any of it.
We do get more info on Gran’ma, as well. She destroyed Jesse’s mother. Their relationship is one of force. She says she loves him, when she really only loves the control she exerts over him. It’s a dangerous relationship, if it can even be called that.

“It’s okay if it feels good”

The two vampire buddies are attacked in the street. The Monsignor (Michael Harrity) and his diocese team bear down on them with all kinds of tool to subdue and trap the undead. Except they didn’t count on a guy like Cass, who’s spent years building a “tolerance to tranquillisers.” He drives them off, scared Eccarius didn’t make it out. But his new friend is able to evade capture by turning into a mouse. Following their triumph, the two men embrace in a passionate kiss.
Turns out Eccarius is not actually all he claims to be, when Lisa finds he’s actually a self-hating vampire far worse than Cassidy ever could’ve been. He actually bleeds them dry, rather than taking them to the airport and sending them around the world, and then lets them burn in the sunlight. Oh, god. That’s horrific. There are no safe havens out there. So, what else is he doing to create an illusion for Cass?
Starr asks Jesse to promise him when he gets Genesis back he won’t do anything horrible to him. When the preacher does, he’s taken to his soul. Well, supposedly, anyway. He’s actually being put in a life or death situation against Allfather D’Aronique (Jonny Coyne). Yikes.
Speaking of Genesis, Gran’ma has gotten wind of it through TC (Colin Cunningham), and that’s no good for anybody. Watch out. 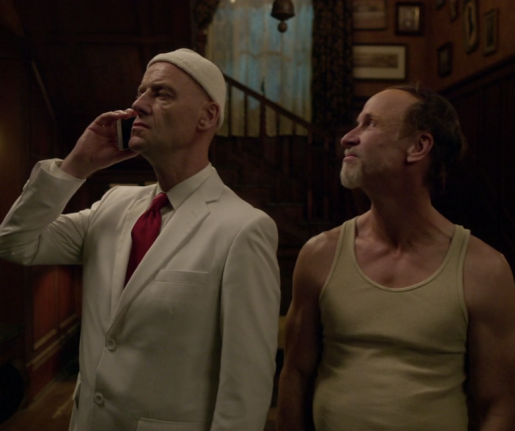 What a fucking fantastic episode! So much going on. Preacher seems to get better and better with each season, like all great shows. There are many new dynamics, different plots, and lots of darkness. “The Tom/Brady” is next time, and I love the title of the episode.