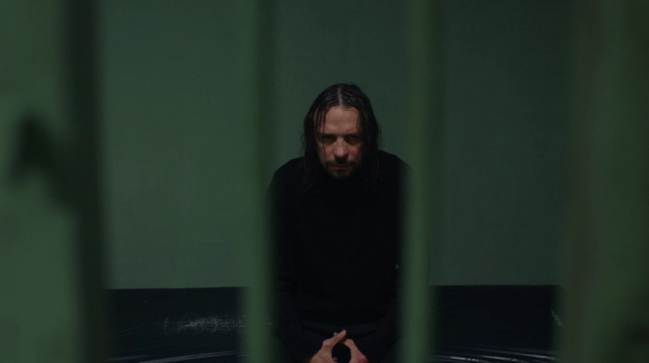 Chief of police Andri Ólafsson (Ólafur Darri Ólafsson) chases the trafficker Jonas Malakauskas (Vytautas Narbutas) through the frozen Icelandic wilderness. He and Ásgeir (Ingvar Eggert Sigurðsson) track the man down, arresting him eventually. There’s more than meets the eye, too. There are more connections to trafficking on that ferry, no doubt. Why else would Cpt. Søren Carlsen (Bjarne Henriksen) prevent him from searching the ship so adamantly when such a brutal crime has occurred? No, there’s something suspicious about it all. Andri knows it, too.
At the station, Jonas is locked up. They’ve still got to check all the passenger manifest, just in case someone’s missing. Andri and Hinrika (Ilmur Kristjánsdóttir) both go up together to look at the camper, seeing the squalid state of its interior where people were clearly cooped up together in a tight space.
Mayor Hrafn Eysteinsson (Pálmi Gestsson) – “once a cop, always a cop” – turns up at the station to pester everyone. He warns of the “riff raff” and generally acts like a pain in the ass, only carrying about how the town runs, not so much about the actual events occurring and their gravity.
Then there’s the fact the guys from Reykjavík can’t yet make it to the tiny town because of the weather. The camper van requires a “forensics team,” and the longer it’s left, the less viable the evidence. On top of it all, Andri deals with being thrust onto the news spontaneously, where the rest of the country and the world get a view into his murder investigation. In between it all, the man takes care of his girls, as well as watches his ex-wife move on while he’s trapped by the past.

The ferry’s “grounded for three days” by “Danish court order.” This will give Andri and his police time to do what needs doing. Hinrika’s stuck at the station overnight looking after Jonas, whom she treats like a dog— proper fucking thing for that human trafficking piece of shit. Andri heads directly for the ferry, where he serves Cpt. Carlsen with the warrant and makes a few accusations. After that he gets talking to some of the crew, such as Ayanike (Georg Leite de Oliveira Santos), the ferry’s chef. They chat about Hjörtur (Baltasar Breki Samper), who actually worked on the boat in the kitchen for a brief berth. Turns out, he’s “difficult to work with” and has somewhat of a temper.
This sends Andri to see Freyja (Ólafía Hrönn Jónsdóttir), the young man’s mother. She tells the police chief Hjörtur never got over losing Dagný (Rán Ísold Eysteinsdóttir). She also suggests maybe her son had something to do with that fire, quipping that it “didn‘t start by magic.” Andri wonders if her son has a tendency towards violence. Across town, Agnes (Nína Dögg Filippusdóttir) and Sigvaldi (Rúnar Freyr Gíslason) wind up stumbling onto the human trafficking victims – Joy (Grace Achieng) and Nishadi (Marta Quental), two Nigerian sisters – who fled the camper, hiding away in a house.
Right away, Agnes alerts Andri. They confirm Jonas brought the girls here, then Hinrika talks with them and gets photographs of their injuries which disturbs her greatly. The police chief has few leads, other than Jonas and his victims, plus suspicions re: Hjörtur. Could go many ways. The Hjörtur connection stirs feelings in Agnes. We further see she’s planning on taking the girls to live with her after this trip, which Andri’s got to balance on his plate along with the rest of his current miserable existence.

The mayor and the other bourgeois of this Icelandic outport haven’t stopped their politics, what with a congressman in their midst. Some residents become suspicious when they hear more from the money men pushing the building of a new harbour. They don’t like boats of “real trade” and empty promises, worried for another “economic collapse” like they’ve experienced before. Mayor Eysteinsson pushes hard trying to get everyone on board. Not everyone will be swayed, though.
Later, the chief gets a call from Ævar (Arnar Jónsson), a senior Reykjavík officer and close friend. They talk about the crime and everything swirling around. Ævar believes “the mafia” is to blame for such grisly crime.
Hjörtur’s broken into the fish factory, where he’s having a look at the chopped up human torso kept as evidence. Weird, no? Does this mean he did it? Or, does he just know more than he’s led on so far? Definitely an odd moment peaking Father Gore’s macabre curiosity. His possible involvement’s already causing problems for Agnes and her family, as it dredges up the difficult, tragic past. Andri’s busy getting Interpol information on Hjörtur, such as how he did time for arson.
At the station, Ásgeir finally caves to let Jonas go to the bathroom after the prisoner poses it as a “human rights question.” The Reykjavík officers still can’t make it through the roads, so Andri and his cops have to handle the situation. Wouldn’t look good to have humanitarian troubles. But Ásgeir’s let his guard down. Jonas chokes and beats him, then escapes leaving the cop locked in a cell. Well, shit.

Things get worse for the investigation after the “headless corpse” turns up on Twitter and gets shared all across the internet— now we see Hjörtur’s intentions. This will cause big problems, in addition to all the other problems. Andri and Hinrika later find the torso itself has vanished, too. Everyone on the ferry is seeing the corpse, which can’t help their psychological state, either.
Then there’s young Perla, Andri’s daughter, whose mean streak has driven a little boy from school, Maggi, out into the cold after she taunts him for not having a father. She and her sister Þórhildur take it upon themselves to go out in the evening, as the wind and snow beats down, looking for him. Jesus. None of this is good. And with a possible killer roaming their tiny town. 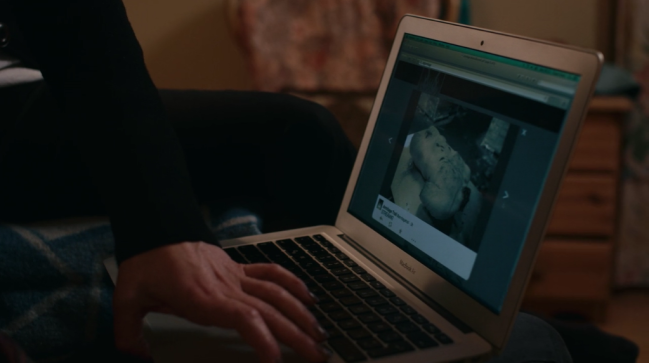 YES! The second episode of Trapped follows up big time on the first, giving us plenty to worry about, and lots of eerie mystery. Love the locations/setting. Cinematography is amazing, as is the acting. Episode 3’s coming up.