We open on an unnamed town in Iceland— a remote, rural place surrounded by mountains and water and rock. It’s relatively treacherous in the winter, given there’s a lot of bad weather and no cell service.
We see two young lovers on a motorcycle heading down a stretch of road. They head inside a rundown building. They smoke a little weed and get intimate. Life seems pretty good.
Except afterwards, the young man, Hjörtur (Baltasar Breki Samper) goes down for a piss, finding the building’s going up in flames. He’s able to get himself free, but his girlfriend Dagný (Rán Ísold Eysteinsdóttir) is not so lucky, trapped in the fire upstairs to burn alive. 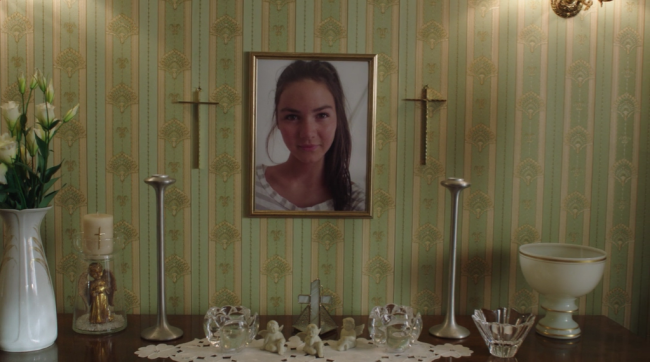 We jump ahead 7 years later. Dagný’s gone, though not forgotten. We meet Andri Olafsson (Ólafur Darri Ólafsson), local police chief ad divorced father, ex-husband of Agnes Eiríksdóttir (Nína Dögg Filippusdóttir), Dagný’s sister. They have a couple daughters together, taken care of often by their grandparents Þórhildur (Hanna María Karlsdóttir) and Eiríkur (Þorsteinn Gunnarson). There’s also something Andri doesn’t know that his ex-in-laws aren’t telling him yet. Eiríkur lets Andri know that Agnes is “becoming serious” with Sigvaldi (Rúnar Freyr Gíslason), her new partner, and he’s on the way to town with her. Yikes.
Double yikes out on waters, where an unusual, gruesome discovery’s about to be pulled in off the waves in a boat’s fishing nets: a human torso. Police officers Ásgeir (Ingvar Eggert Sigurðsson) and Hinrika (Ilmur Kristjánsdóttir) get the call and head out immediately. Helps nobody this is at the same moment the ferry arrives from the mainland.
Andri’s soon summoned to the docks, so he can witness the horrific find himself with “no head” and “no limbs“— all torso. Immediately, Andri believes the body was stored in a freezer, having no evidence of bites or any swelling from being in the water too long. He suspects the dismembering was done on the ferry, which means he has to shut the port down. While all this is happening, the local government is discussing shipping routes, the local economy, and they too hear of the dead body. Such is small town life, where everyone knows everything instantaneously. Mayor Hrafn Eysteinsson (Pálmi Gestsson) is particularly concerned, obviously.

On the ferry, Andri presents himself to speak with the captain, Søren Carlsen (Bjarne Henriksen). Cap isn’t pleased to hear the vessel will be stuck in the port, nor is he happy to hear the police chief’s suspicions. He refuses to let the ship be searched without a warrant. Being a Danish ferry, this presents issues. Andri needs a “Danish warrant” first. But he doesn’t need one to talk to anybody. Before stepping off the ship, he runs into Hjörtur, who’s returned to town after leaving post-fire. Should be an interesting arrival for others in town, too. Especially when Agnes turns up.
In cold storage at the fish factory – owned by Leifur (Jóhann Sigurðarson), none too thrilled to have a hacked body in his freezer – Andri and Hinrika take a closer look at the torso. For one, it’s male. The chief sees “medium–sized” stab wounds – seven of them – including one straight through the heart. The neck was sawed through, and the whole job looks as if it were done quickly. Not an easy feat, to dismember a corpse. Above the buttocks, Andri sees a scar, possibly from a previous surgery.
The townspeople, rightfully, “are afraid.” This isn’t an everyday thing for them, they’re not used to crimes usually confined to the big city. This puts everybody on edge, least of which is certainly not Andri, whose wide shoulders bear the weight, as if he alone takes responsibility for every single thing instead of allowing others to help. His officers work hard, but the chief seems isolated psychologically.
With real bad weather bearing down, the school closes, as do the roads in and out of town. Kids are escorted home, many are picked up by parents. Andri picks up his girls to news the murder has spread “all over Twitter.” Oh, great! They might be geographically cut off from the outside world to a degree, but the online world keeps them connected, almost too much in a case such as this one. Andri drops his girls off to their grandparents, where Agnes and Sigvaldi are waiting. This leaves everyone feeling pretty awkward.

At the ferry, things aren’t going well. The captain’s turned off the heat. The mayor’s concerned they don’t have anywhere to house passengers should they be let off the boat. Passengers are stuck in the tunnel to the terminal, as well. Captain Carlsen only cares about his fuel. Although Andri suspects this is all a diversion, that Carlsen’s actually hiding something from them. Nevertheless, he’s got to figure out what to do now. Simultaneously, Ásgeir checks the passenger manifest to see if anything suspicious comes up. He finds one man, Jonas Malakauskas (Vytautas Narbutas), who we’ve seen stressing out over the stalled ferry. Seems the man’s a Lithuanian “charged with human trafficking” and rape, though the charges were all dropped. Quite suspicious.
Andri has a picture of Jonas, and he makes sure all the police check for him. As vehicles leave the ferry, every one is stopped. The chief sees the man behind the wheel of a camper, prompting Jonas to flee. This sends Andri after him on the snow covered roads. Eventually, the camper gets stuck. Jonas takes off into the dark, snowy landscape, leaving the women he’s trafficked alone to run for themselves.
In the meantime, people continue to worry. Even Andri’s daughters, one of whom sees the stark reality of their tiny town. “We‘re all trapped,” she tells her sister.

Wow, I waited too long to start this series! Good lord. It’s subtly horrifying, and I’m always a sucker for small town drama, especially considering I’m from a place not THAT different from this Icelandic town. Excited to dig into Episode 2.