We see an old pal of Jesse’s (Aaron Paul) from the motel, Wendy (Julia Minesci). She’s living the same old life we last saw her living. When she gets low on funds and crystal meth, the hustle begins all over again. She also happens to deal with the two dealers who use Tomas (Angelo Martinez) as their drug boy. Here, we can see where things are headed soon.
Walt (Bryan Cranston) is teaching Walt Jr. (RJ Mitte) how to drive properly, though Jr has trouble because of his condition using one foot to drive. Just takes practise. It’s ironic to see dad try teaching his son about not taking shortcuts in life when he’s the meth kingpin of Albuquerque.
At the same time, Skyler (Anna Gunn) is searching money laundering on Wikipedia to learn as much as she can, and she keeps on pushing the car wash story. Walt would rather her “not look to closely at” the business side of his endeavour. We all know she can’t do that. He’s using this as a way to possibly get himself back in the house, in turn helping things look normal to outside eyes for their “little fiction.” 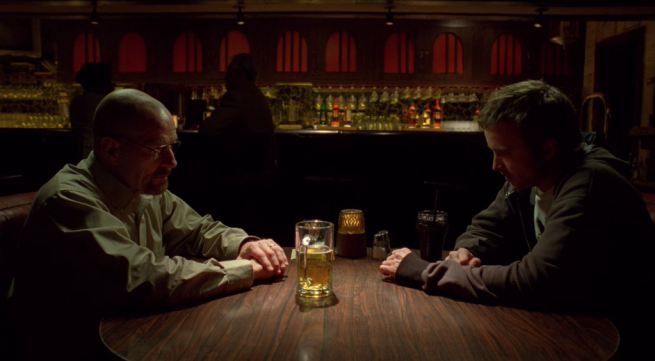 At the lab, Jesse asks Walt if they might get a beer after work together. He’s dying to talk about what he’s found out. Afterwards in a bar, he breaks out a baggy of their blue stuff. He’s verified the chain of command from the dealers on the street back to Gus Fring (Giancarlo Esposito). It’s all too much for Jesse to bear, he wants revenge against the two dealers. Walt cautions it’s pointless and dangerous.
Walt goes to see Saul Goodman (Bob Odenkirk) wanting to figure out a way to get Jesse off the streets, knowing he’ll go ahead with his plan. He brainstorms with his lawyer. Neither are exactly sure how to handle the problem. Saul doesn’t think getting Jesse pinched is a great idea, though neither have any better ones. In the meantime, the younger of the two cooks is prepping Wendy for the job— he’s going to poison the dealers when she drops off their hamburgers.
Later that night, Walt receives a visit from Mike Ehrmantraut (Jonathan Banks) unexpectedly. The bagman is there to speak about Pinkman. Mike says the idea about getting Jesse put in jail, even for a short time, isn’t good because it wouldn’t look good to Fring, who’d see it as a big issue. He tries broaching the subject of getting rid of Jesse by relating an anecdote of when he was a “beat cop” dealing with a terrible case of domestic violence which eventually resulted in murder. Basically, it’s a lesson in doing what needs to be done WHEN it needs doing, or else the effects can become more brutal: “I chose a half measure when I should‘ve gone all the way.” 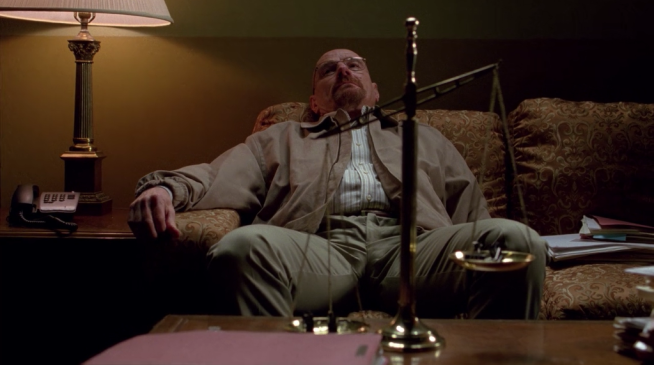 On the street, Jesse and Wendy are waiting to poison the dealers. This is when Mike comes to chat. He and Victor (Jeremiah Bitsui) take the cook in a car and they head out towards the truck fleet. There, he’s brought to meet with Gus at the trailer— Mr. Fring’s also brought the dealers with him, and even Walt is present. “There is blame on both sides,” Gus says, reminiscent of President Trump years after this episode aired. He further goes on to threaten Jesse, stressing that making peace is the best solution for everyone. The cook refuses, calling the chicken man out for allowing children to be used as weapons in the drug trade. Gus orders his men not to use any kids, offering this to Jesse.
All good, right? Doubt it.
Jesse’s not letting go. He’s both grieving over his friend Combo, and simultaneously disgusted by the fact everyone seems to be fine with kids dealing meth. There’s still a separation between Jesse and some of the others in the drug world. Yes, he’s a cook, he’s facilitating the supply of meth by cooking it, yet there’s a moral relativity in that he would ever involve a child in the drug business. There’s a hope for him despite all his flaws.
Speaking of hope, Marie (Betsy Brandt) is getting her way after all and Hank (Dean Norris) is checking out of the hospital, after she bets him he’ll be able to achieve full mast from a handjob. He’s down and out, believing himself a lost cause in more ways than one. She knows better. And after she’s done, they check out, heading for home.

Everything goes sideways when Tomas ends up dead. As if things couldn’t get any worse, Jesse witnesses Andrea (Emily Rios) get the call altering her of her brother’s murder. Someone shot the kid on the street. Whoa. That’s a horrific end result to all this drama. Jesse will take this on his own shoulders as guilt, too.
The next day, Walt can’t find his partner at the lab, so he’s got to cook on his own. The entire day Jesse’s absent. This makes Mr. White very concerned, he can’t even get his partner on the phone. So he rushes off in the middle of family dinner.
Out on the street, Jesse snorts meth in his car. He’s waiting for the dealers, because this is the moment when he plans on killing them himself. “No more half measures” for him. He walks across the block to where the two men sit in their car. But they see him coming and get out. Before Jesse can do anything he’s interrupted when Walt comes flying through in his vehicle, running the dealers over. Walt gets out and executes the still living dealer in front of a shocked Jesse. Holy fuck. Ruthless. He did that so his partner wouldn’t have to, though now he’s the one with further deaths on his conscience.

An intense episode with a wild, unexpected conclusion. First time I watched this I never expected Walt to go to such lengths. Incredibly interesting as far as his character’s concerned.
“Full Measure” is next time.