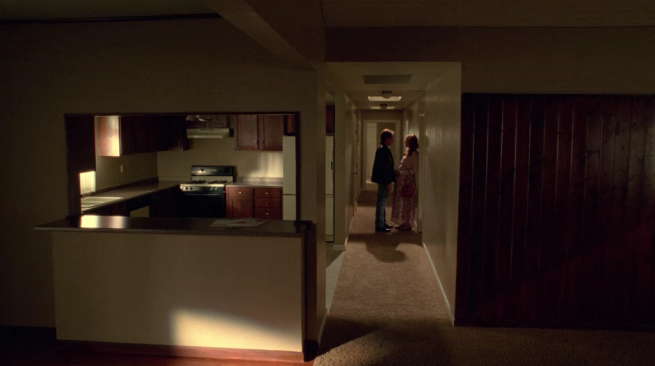 We see a flashback to when Walter (Bryan Cranston) and Skyler (Anna Gunn) White went to view the house where they now live, back when they were younger, more optimistic, and even before Walt Jr. (RJ Mitte) was born. The realtor gave the couple a chance to look around. They were ready for a life full of plans. Walt was still looking forward to a career in chemistry, he believed there was “nowhere to go but up.” Yet we’re continuing only an episode after he’s run two men down, shot one in the head. Things have gone way down.
In the desert, Walt waits in his beat up vehicle. Mike Ehrmantraut (Jonathan Banks) pulls up in the distance. They meet at the middle. Mike was up all night cleaning the mess. Gustavo Fring (Giancarlo Esposito) is present, too, and very unhappy with his cook for the disobedience shown and wants an explanation. Gus calls Jesse Pinkman (Aaron Paul) a “contemptible junkie.” This is when Walt semi-suggests the chicken man of having the boy killed, though he plays it sly. Afterwards, they get back to talking business. As always, Mr. White talks a good game. Fring agrees to a continuance of their partnership, so long as he picks the new assistant.

Always interesting to see Mike work. He uses a helium balloons to short wiring to a nearby building. This allows him to get the jump on a couple armed men with a silenced pistol. Inside, he kills another couple men and locates Duane Chow (James Ning), a businessman at a chemical warehouse. This is merely legwork. It’s cartel related, which concerns Gus.
Now for the return of Gale Boetticher (David Costabile)! Not the only change at the lab— Victor’s (Jeremiah Bitsui) there to watch over operations, and the whole place is locked up tighter than ever. Walt starts cooking with Gale again like they’d never stopped. That’s how it must be, or else things would be a lot worse.
We see more of gale at home. He’s an eccentric man. That night he answers a knock at his door: Mr. Fring. The two men sit for a chat, during which Gus brings up the “rather pressing” issue of whether Gale could take over the lab on his own with an assistant. Gus tells him about Walt’s cancer, though not the full truth. What’s actually occurring is, the chicken man is sussing out if he can kill Walt yet, or if he’ll have to wait a while longer. And, boy, is he anxious! Only one more cook. 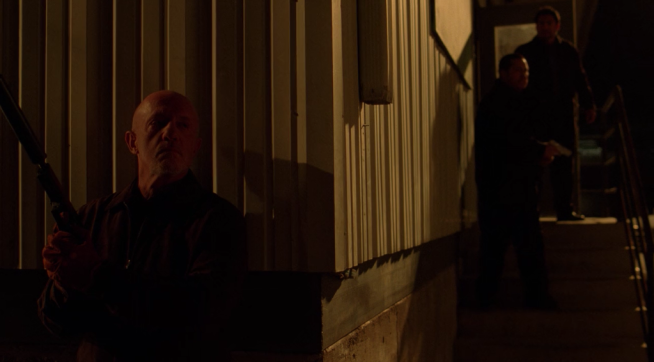 At his office, Saul Goodman (Bob Odenkirk) gets a visit from Mike, asking about Pinkman. The lawyer’s not forthcoming. Mike’s a convincing and serious man. Saul tries holding out. He’s not a particularly honourable guy to begin with, and his loyalty doesn’t extend to being beaten until his “legs don‘t work” for a meth dealer.
Later, Saul and Walt have words over how things have been going. The two of them meet with Jesse at the laser tag place. Walt and Jesse discuss things, the former already realising he’s going to be killed once Gale is in perfectly set in place as the cook for Gus. They don’t have many options left. Except kill or be killed, at least in the mind of Heisenberg. He wants to kill Gale to save himself. Jesse says he can’t bring himself to do that, he doesn’t want more death. This leaves Walt to do the deed. He just needs his partner to find out where Gale lives. Once they know the address, the plan’s set. Jesse urges Walt not do it one last time. 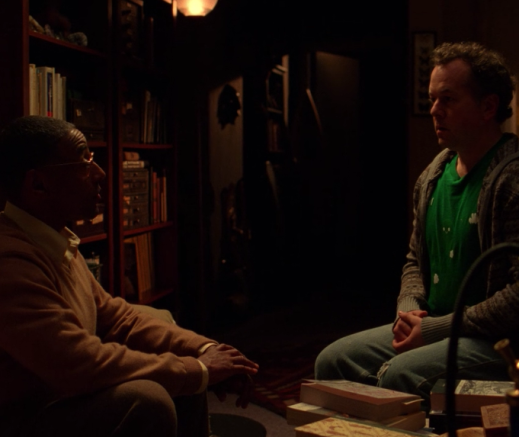 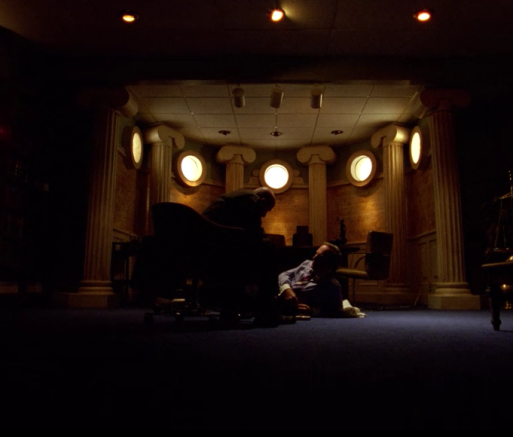 Except when Walt’s about to go complete his task Victor turns up and says there’s a “chemical leak” at the lab requiring his attention. He’s brought out to the laundromat where Mike’s waiting. Walt knows this is where he’ll die, flying into hysterics. He then offers up Jesse for his life. He’s able to call his partner and convince him to kill Gale. Jesse rushes off fast while Walt finds himself on the end of a gun, bargaining himself as the last available cook because the assistant’s about to die.
Victor rushes off to try stopping the events being set into motion. But at his apartment, Gale answers the door only to find Jesse with a gun. He gets shot in the head. And a whole new chapter commences. 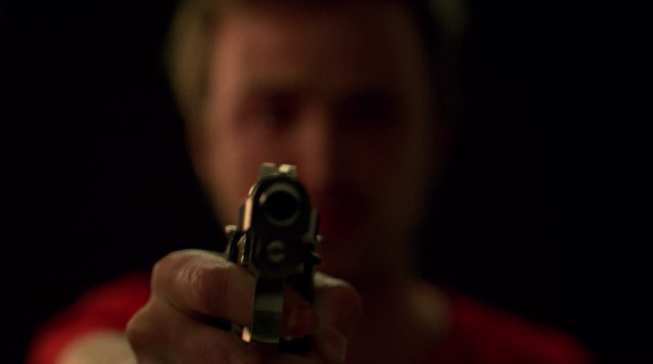 Man, this episode always gets to me. Such a brutal, intense chapter of Breaking Bad. First Walt saves Jesse from having to become a murderer, only for him to have to force him into the exact same situation once more. Harsh irony. Vince Gilligan’s a master at directing and writing, a great storyteller for TV.
Season 4 is coming up next. “Box Cutter” is the first episode, so buckle up!