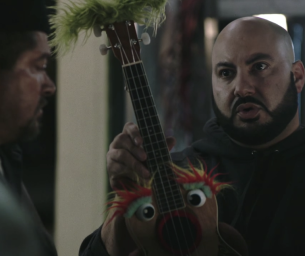 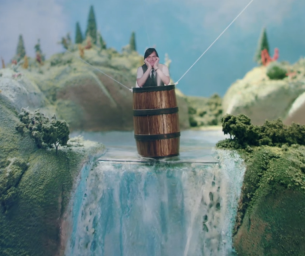 Just the luck of Jeff Pickles(Jim Carrey): his car gets jacked by some dudes at night outside his apartment and, after they recognise Ukelarry, return the vehicle in fine shape. Such is the reach of his stardom— even car thieves know him!
On TV, Mr. Pickles is legendary, like Mr. Rogers, Mr. Dressup, and Fred Penner all mashed into one. In the hospital, Jeff goes to visit a young boy who’s had serious surgery. He shows off his new haircut for the kid and they bond a bit, though the boy assume he’s got “brain cancer, too.” This is the ward where Jill (Judy Greer) works. Jeff worries about the new man in her life. He’s also concerned about his discovery of the “P in P–hound” from Trejo’s necklace, which is hilarious. More than that, he’s continuing to lose his mind.
At work, Deirdre (Catherine Keener) has to try and get things done while concerned about the recent discovery her husband’s a closeted gay man. Both she and her father Sebastian (Frank Langella) – as well as the rest of the crew – are surprised to see Jeff turn up with his weird hair. Dad says he looks like “Lee Harvey Oswald‘s creative younger brother” or “Shooty the Clown.” They’ve got to patch it up so they don’t freak out too many kids.

While dad goes crazy and mom fills the hole in her soul with “red wine and penises,” young Will (Cole Allen) smokes weed with older kids, and tries sorting out his psychological issues after losing his twin brother.
Jeff is convinced moving in next door to Jill will solve his problems, whereas his sister suggests it’s only going to push her father away. This has the estranged husband baking a pie in the dark just to keep up the illusion he’s not right there across the way, watching them live their lives. Sucks for him most of all, as he’s got a front row seat to watch his wife and kid enjoy their time with a man who isn’t him. This further leads to him forgetting he’s left the stove burner on before fleeing the new, empty home. Oh, shit.
What’s saddest about Jeff is how he’s been stuck in this kids world for so long he doesn’t seem to know how to relate to the adult world, in so many ways. He’s been usurped by Peter (Justin Kirk), Jill’s new casual man, who sucks on her toes to get her off— something surely Jeff wouldn’t do, or at least certainly hasn’t done. He also can’t even talk to Will particularly well. He cares for his boy, but, especially after his other kid died, he wants Will to remain a child, too much so. The kid actually goes to Peter for advice before his real father. Something tells me, sooner than later, Mr. Pickles is going to break out of that kid friendly shell.

On the show, Jeff decides to change the gender of Astronotter, which doesn’t sit well with his father. He introduces Sebastian to “gender fluidity.” Except that doesn’t vibe with the capitalist agenda of Mr. Pickles— something his father is all about. He won’t budge, though neither will his son. Jeff wants to change the show so they can be true to the kids of the world. When Mr. Pickles makes the network a ton of cash, you can’t just change everything. Seems Jeff’s intent on fighting the power.
I keep wondering what that gas from the stove top’s going to do. Nothing good.

Loving this series. Two episodes in, I’m totally sold! Extremely dark, yet none of the hilarity is lost. Lots of great stuff going on, dealing with heavy subjects through laughter. This episode was even funnier than the first.
“Every Pain Needs a Name” is next.