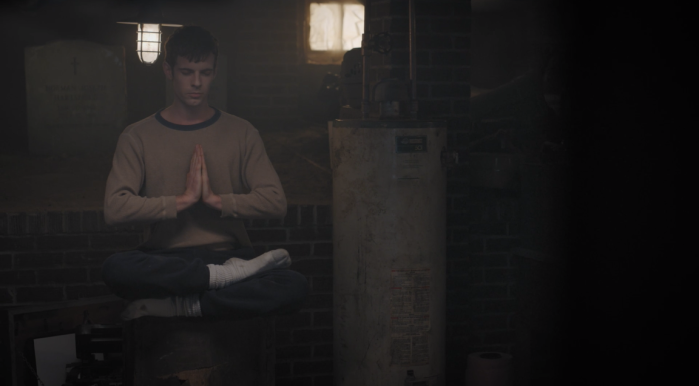 One of the few episodes to not begin with a tune, this time we’re starting in the wake of Sadie MacDonald’s tragic suicide, coaxed over the ledge by Brady Hartsfield (Harry Treadaway) manipulating her mind. Bill Hodges (Brendan Gleeson) is rightfully confused and devastated. Nurse Maggie Wilmer (Tammy Arnold) tells Dr. Felix Babineau (Jack Huston) how Sadie was “just off” as of late. Everybody’s left reeling in various ways. Bill runs into Antonio Montez (Maximiliano Hernandez), who asks about why he was at the hospital at such a late hour. He also says he stopped going to see Hartsfield because he realised the killer wouldn’t be waking up.
However, one way or another, things are changing.
Ole Hodges is covering all bases. He wonders if Mr. Mercedes had influence over Sadie, in some possible way. Holly Gibney (Justine Lupe) casts doubt over this before Bill makes clear they need boundaries as friends/co-workers— she’s not great at boundaries.
In his mental basement, Brady listens to Dr. Babineau and his colleagues talk about his lifeless yet living corpse. Alone together, Dr. Babineau and Maggie speak, as he asks about the “ex–cop” who used to visit the killer. He makes clear the “sophisticated procedures” at work, as well as the need for absolute secrecy. Simultaneously, Brady hears how Nurse Wilmer’s a friend of “fatty Hodges.” Uh oh.

At Finders Keepers, Bill and Holly receive an angry visit from Mrs. MacDonald (Kate Burton), wanting to know why he’d been snooping around recently. He asks how her daughter was acting lately. Bill tells her about the erratic behaviour Sadie displayed, from trying to give a patient an overdose to nearly putting a scalpel into him.
Brady’s faced with trying to find another way out of his basement. He doesn’t know how to manipulate Maggie, she’s not an epileptic like Sadie. This conjures a vision of his old supervisor, Robi (Robert Stanton)— his vision offers encouragement, suggesting there’s no need for a healthy body when his mind remains healthy and able to manipulate.
Things for Lou Linklatter (Breeda Wool) aren’t going well. Her girlfriend Steph (Samantha Massell) needs “some space.” Steph doesn’t like what Lou’s doing to herself by going back to see the guy who just about murdered her. She doesn’t want to watch her self-destruct/keep taking care of her anymore.
Bill gets a house call from Antonio. He talks with the DA about why he’d been checking into Sadie. Antonio wants to let him know there’s no space for being reckless, given what occurred last year. They put everything on the table— well, Bill does so only to a point. The DA winds up finding the old detective’s “fucked up obsession,” and uncovers the theory Bill’s hiding.
One of Sadie’s old pals Al (Mike Starr) mourns her death. The guy goes into Brady’s room to turn on some animal TV programming and play games on the Zappit in the killer’s room. This is the next way the killer will escape mentally. Al’s like a blank slate. And so the game lulls him in until Brady uses his brainpower to get inside his head. Goddamn. The killer doesn’t fully have a hold yet. He finds the tablet to be a gateway between consciousnesses. When he does, he’s able to manipulate Al fully, so they head for the exit together. This allows Brady to head into the outside world.

“I never could feel much of anything, darling.”

After meeting a girl in a bar, Lou heads home with her. A guy accosts them, so Lou pepper sprays him. The other girl takes off. Lou remains, beating the shit out of him until he’s bloodied. Cops soon arrive and she’s got bigger problems than not getting laid. Luckily, Steph bails her out in the morning, though she’s no less understanding about Lou’s mental state.
Brady gets Al into his vehicle, heading for the road like old times. They return to the scene of the massacre where Brady drove through all those people at the job centre. There’s a memorial for the victims, which the killer takes in with voyeuristic pleasure.
Bill goes to see Mrs. MacDonald, who’s not exactly happy to see him. He’d like to check Sadie’s cellphone. He explains the police “don‘t care” and they’ve ruled it a non-suspicious suicide. He’s the only one left who cares about the actual truth, prompting her to let him see the phone.
Holly goes to Ida Silver (Holland Taylor) with her concerns about Bill. She doesn’t want to lose him, either as co-worker or friend. She doesn’t believe what Bill thinks about Brady’s worth pursuing. Ida makes clear Holly doesn’t need to depend on anybody “to survive.” But she also tells the younger woman to trust her investigative partner, since he’s always “up to good” as opposed to “no good.”
At the same time, Bill has Jerome (Jharrel Jerome) looking into Sadie’s cellphone, hacking in past its security measures. The kid’s able to get things done. Once they get in, they find texts to Matthew where Sadie talks of Brad being in her head somehow, confirming what Bill’s suspected all along. Right at that very moment, Al’s pulling up outside the Hodges residence. FUCK!

Others might not dig the semi-supernatural twist— Father Gore’s loving it! Especially with Bill hot on the trail. Can’t wait to see if Al poses a physical threat to our former detective. It might get brutal. There may be blood.