In a scene pulled straight from Shirley Jackson’s The Haunting of Hill House but transposed into Mike Flanagan’s new setting and his version of the characters, young Theo (Mckenna Grace) feels her sister Nell (Violet McGraw) get in bed next to her, saying she had a nightmare. Except nobody’s there. The girl wonders whose hand she held. Wonder if this incident has to do with grown up Theo (Kate Siegel) wearing gloves constantly. Or maybe she’s able to see/feel things via touch.
In present day, a girl named Kelsey (Charli Slaughter) talks about an entity she calls Mr. Smiley. She explains to Theo – who’s a child psychologist – about the man, saying he’s “always smiling but he isn‘t happy.” Theo relates to her, assuring things will be fine, so long as she learns how to make herself safe in a psychological way. There’s absolutely extrasensory perception on her part. She feels something when Kelsey touches her.
As a child, Theo was helping her dad Hugh (Henry Thomas) clear old stuff to auction off. She sensed one box meant for the garbage ought to be opened, inside which dad discovered a vintage bottle of booze. The girl had/has a connection through touch to the world, not only people.

Back in the day, Luke (Julian Hilliard) and Nell found a communication device between the upstairs and downstairs via a gramophone-like tube. Theo was finding out more about her abilities when she laid a hand on the pillow in one of the rooms— “This was a sickbed,” she said, disturbed by whatever it was she felt. In current day, Theo uses her abilities to help children, allowing touch to bind them mentally.
Another flashback six years ago to Steven (Michael Huisman) and his book. The Haunting of Hill House didn’t thrill anybody. Shirley was pissed despite her brother offering “8%” of any profits to each sibling, calling the pay-off “blood money.” Nell (Victoria Pedretti) wasn’t so opposed, knowing the ghosts were real. They all refused the money in solidarity. Of course later, Theo changed her mind, and she used her cut of the cash to pay for her PhD.
An even further flashback sees Theo dancing alone to “Cold Hearted” by Paula Abdul, and she heard somebody on the other side of the door struggling at the knob. Nobody was there. In present day, Theo’s as alone as she was back then, even in a club full of people. The abilities of her touch have allowed her to help others, simultaneously it’s always been a form of isolation— it’s why she wears the gloves, to keep from having to deal with the ghosts of everyone else’s past on top of her own.
Yet another flashback takes us to Luke wanting to ride on the dumbwaiter in the kitchen. Theo helps him. Although the boy wound up in the basement. And there he sees a hideous thing crawl from the dark at the far ed of the room, crawling fast towards him with its flesh hanging off and its eyes showing nothing but white. Hugh and Olivia (Carla Gugino) rush in to the kitchen hearing both their kids screaming. Luke’s pulled up, no worse for wear, except for psychological damage.
In present day, Theo’s seeing her own hideous apparition at the foot of her bed: Mr. Smiley. He came to visit. This is actually the moment from last episode, when Shirley was coming to tell her sister about Nell’s suicide. We flashback to the deceased’s wedding reception, where she and Arthur (Jordane Christie) were happily enjoying themselves, though a couple groomsmen and maids of honour were missing at toast time. Nell and Steven found one of them getting laid, coincidentally with their sister Theo, whom they had no idea was into women. A sweet moment in a family inundated with terrible ones.

“Nobody ever believes me”

Poor little Luke is terrified of what he saw in the basement— a room not even on the blueprints. His parents can’t understand the supernatural things their children have experienced. Theo uses her touch to understand what Luke saw, persuading her to investigate the house. She found a hatch hidden in the floor, through which she climbed down a ladder to the darkness below. In the dirt she found a patch of her brother’s shirt torn off. She soon came to a door.
Present day. Theo goes to see the family whose foster daughter keeps seeing Mr. Smiley. She wants to go see the basement. She touches a couch, feeling a sense of something dark. She lies on it and falls deeper into whatever memories it holds. Whatever it is disturbs Theo. She purposely leaves a glove off while leaving, shaking the foster dad’s hand and noticing his smile. She confirms there’s abuse happening, making Kelsey believe in a nightmare entity when the horror of her life is, unfortunately, all too human.
As a child, Theo found a book belonging to previous owners down in the basement. It was full of “secrets they were trying to hide.” Olivia finds bookkeeping records from a business during the Prohibition era. The cellar was likely used for a bootlegging operation. Olivia started getting curious about Theo’s abilities, which “Grandma Mary” had, too. “Sensitive people,” her mother called it, giving her daughter a gift: her first pair of gloves.
Down in the funeral home morgue, Theo goes to see Nell’s corpse. She puts a bare hand against her sister’s skin, to see what it reveals. Whatever she sees scares her terribly, sending her into a fit of tears. She goes back to her recent booty call out of comfort, and as she recounts Kelsey’s story it mirrors the life of Nell, in how nobody believed the girl, just as it was for her sister. Now she knows the truth, after looking deeply into Nell’s memories. It’ll only serve to lead her back towards Hill House again.

We skip back to the final night at the haunted mansion, when Hugh was gathering his family to get everybody out safely. Theo was bombarded with images when her father grabbed hold of her— a little ghostly girl on the spiral staircase, a rotting skeleton, an eerie pale face, the Red Door, and him pushing her mother forcefully. Many secrets existed, and continue to exist in the Crain family. 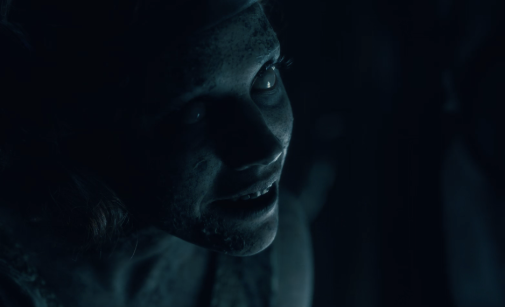 Flanagan’s series only gets better with each chapter. Marvellous writing. All these characters are extremely vivid. Such a heavy human story surrounded by the supernatural. “The Twin Thing” is next.