Wes Craven always gets credit for his greatness as one of the Mount Rushmore Presidents of Horror. A well deserved honour. The late horror master gifted us unforgettable, iconic slashers, one more than one occasion, and one of those— Freddy Krueger— is arguably the most well known horror villain in cinematic history. All too often people forget he offered more than solely a bunch of great creeps. A few of his movies are surprisingly political.

The Serpent and the Rainbow is overtly political, based on a book by Wade Davis about Haitian Vodou zombies. Craven tackles the effects of the U.S. Occupation of Haiti and the authoritarian influence of the real life Duvalier dynasty through fantasy-horror. Many see this as just a zombie movie. Remember Night of the Living Dead, Dawn of the Dead, and Day of the Dead were all politically/socially conscious horror.
Central to the terror is an intense performance from Bill Pullman, whose fright is genuine as we follow him down a Haitian Vodou rabbit hole. His experience is nightmare fuel. As an allegorical story it’s terrifying— ironically, this may be the most human story Craven’s ever told.

“Scream all you want, there is no escape from the grave.”

The entire use of the zombie here is as an allegory for control. Specifically, the oppressive control of governments wield over the people they’re meant to work for/protect. Craven’s movie explores the sociopolitical situation of Haiti in the mid to late ’80s, where the government was working against the people, in turn forcing citizens to work against other citizens. This is where the zombies come in, symbolic of those used by the government, and an overall commentary on the state of existence living under an authoritarian dictatorship.

Dargent Peytraud (Zakes Mokae) is what’s known as a bokor— a male Vodou witch for hire. His presence in the screenplay is an image of corruption, representing people bent to the will of a corrupt government. Peytraud uses the zombies to do his bidding, which is allowed by dictators. This is an even more devastating form of corruption, in that the country’s institutions are in bed with spiritual groups, further whittling away at the protections of its people.

After the zombification process of Peytraud the victims wake up damaged and disoriented, existing in a liminal space like the zombies we know from various pop culture representations who are somewhere between life and death, which symbolises the real state of people suffering under authoritarian oppression. This zombie imagery is likewise a figurative embodiment— in the case of Dr. Dennis Alan (Bill Pullman)— of the usually sinister, violent processes through which a dictatorship deals with outsiders, or those who would try alerting the rest of the world to what’s going on in their country. Through a hallucinogenic ritual, Alan’s being framed by Peytraud, falsely implicated in a murder. Like the citizens of Haiti, Dr. Alan’s forced into compliance. He’s further symbolic of the U.S. Occupation of Haiti.

“The lower themselves are having their vengeance”

Dr. Alan’s presence as the lone white man in a sea of Haitians represents the persistence of American imperialism. This doesn’t mean Dennis himself has bad intentions, it’s simply a close reading of the character’s larger significance. He’s an outsider, an American at that, and intent on ‘fixing’ the foreign place he’s visiting. In reality his visit causes more damage, including the deaths of certain people he meets, and this relates directly to U.S. interference in Haiti. Near the final showdown, Peytraud scolds Dr. Alan telling him: “It‘s your work that caused this!” Easy to hear this as the exclamation of a villain unwilling to take responsibility for his crimes. It’s the opposite— he’s telling the truth about the doctor, who’s a stand-in for America.

The Serpent and the Rainbow takes place around 1986, the year when the Duvalier dynasty were finally refuted by the Haitian people. During the last scenes you can see people watching television and rejoicing as the Duvaliers flee the country, and, as a symbolic awakening, Dr. Alan stumbles from the grave and rises from his zombie state, just as the citizens of Haiti rise from their zombie state subdued beneath the oppressive authoritarian government. Thus, the whole movie takes on the effects of Haiti being occupied by U.S. forces— this lasted until Roosevelt confirmed a disengagement agreement in 1933, and the final American Marines pulled out on August 15th, 1934.

American presence in Haiti was meant to stabilise the country. Yet their presence only caused social unrest, political instability, a racial hierarchy in the wake of American intolerance, and radically altered the educational system which many felt was discriminatory. In 1920, the National Association for the Advancement of Coloured People (NAACP) sent James Weldon Johnson to assess the situation, and he reported the following: “economic corruption, forced labour, press censorship, racial segregation, and wanton violence [was] introduced to Haiti by the U.S. Occupation.” There were reports of houses belonging to natives taken for military use, as well as Haitians being killed by American Marines with machine guns simply for engaging in protests against poor economic conditions. All the mess caused by the Duvaliers later, and also the reactions of the revolutionaries and rebel groups, was essentially caused by the Americans making everything worse— exactly the sentiment Peytraud expresses to Dr. Alan. 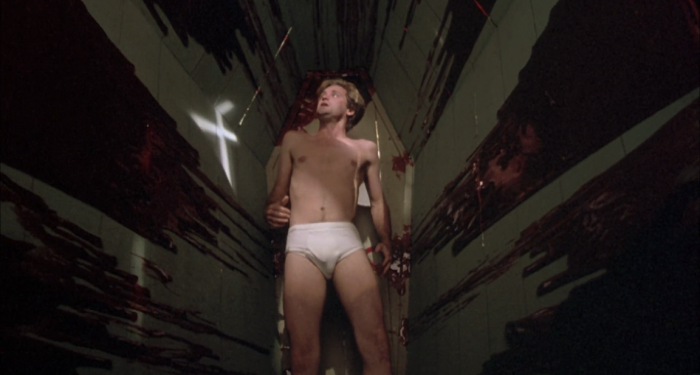 Dr. Alan puts an end to Peytraud— like the Reagan administration in America pressuring Jean-Claude Duvalier to renounce power— but he, as an American symbol, is what ultimately allowed this all to happen. Even after the Duvalier dynasty ended there was unrest and instability in Haiti, the same as it is when Dennis emerges from the grave and finds the streets in riotous celebration. Nothing’s entirely fixed, only patched up with a Band-Aid over the effects of America’s occupation— the original wound remains.
The Serpent and the Rainbow is a fascinating trip into a portion of Haitian culture, and Craven uses it as an excellent critique of America’s incessant focus on or obsession with imperialism. Pullman’s lead performance is one of his best, and the psychedelic journey he’s forced to undertake is a terrifying thing to witness, with or without any of the allegory involved.

A perfect Halloween movie. Craven draws on all the story’s Vodou aspects without any disrespect or racism towards Haiti, careful not to exploit the culture. Never forget: Mr. Craven was both a masterful artist of great importance and one who simultaneously capable of giving/ us a nasty horror treat full of terror. He’ll forever be loved and missed.