This episode is titled after “Where Did You Sleep Last Night?” or “In the Pines” or “Black Girl”— a traditional folk tune, popularised by Lead Belly, and later by Nirvana on Unplugged.
Now that Pretzel Jack (Troy James) is on the loose in reality, what will Jillian (Maria Sten) do? She’s facing the aftermath of Jason being murdered by her childhood imaginary friend. The cops are digging into things, asking questions about the relationship between Jillian and Jason, why the murderer didn’t hurt her, and none of those questions have any answers. At least not ones that’ll satisfy anybody.
Jill gets talking to neighbour Ian (Steven Robertson) while she gets a breath of fresh air. He suggests a “Neighbourhood Watch” of some kind after recent events. He’s squeamish of violence on TV, let alone in real life. He also suggests “lucid dreaming” when she says she can’t fully remember what happened during the attack.
After the funeral, Jill and her husband Tom (Brandon Scott) talk about whether or not they believe in the supernatural. He clearly doesn’t, yet she’s got an entirely new perspective on things since the appearance of Pretzel Jack. She keeps having a memory of a closet in her childhood ohome, from which her imaginary friend once crawled through a blue door like the one that opened in the basement of their new house. 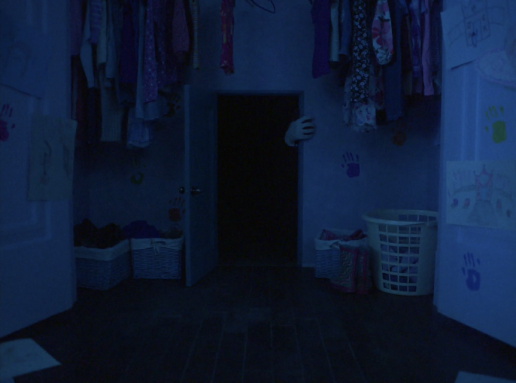 Jill goes to the old house where she and her mother lived. She wants to get a look at the room she slept in as a little girl. She’s invited in, and eventually goes upstairs. In the closet she sees a tear in the wallpaper. She sneaks back inside after the owner leaves later for a better look. She breaks through the wallpaper to the other side, where she sees the door with its hand print in the centre.
Tom’s continually lurking around Sarah Winters (Diana Bentley). Also, she has a black baby. Does this mean the husband’s a cheater? Did he father a child with this woman? Clearly something nasty happened, or divisive, at least. Meanwhile, Tom’s curious why his wife went over to Jason’s that night. A liar/cheater is always suspicious of other people. He’s back to his gaslighting techniques again. And in the background of their house, Pretzel Jack’s creeping. Jill sees him, running for Tom, who comes in to find no one else in the room. This just serves to make her feel like she’s actually crazy, rather than being made to feel crazy.
Jill tells her therapist Abel Carnacki (Steven Weber) about how her imaginary friend “became real.” It all started when her father left, that’s the first time Jack came out of the door. Abel takes it all as psychological metaphor. She knows it’s all too dangerously real. She’s gaslighted by everybody, from her husband to her therapist to the cops— coincidence they’re all (mostly) male? The only who seems to listen to Jill at all is Ian. He’s the one who listens to her “door situation” without any judgement. She explains the wild truth to him. Ian casts Pretzel Jack in the light of “a healer” protecting Jill. Carl Jung believed greatly in the idea of a tulpa, claiming to have one, so there’s more Jungian connections again in this episode.

Tom’s back to see Vanessa Moss (Barbara Crampton). She talks of protectors, as well, suggesting Sarah’s protecting her family. She talks lots of philosophy-type stuff. Their conversation confirms Tom’s definitely fathered a child with Sarah. What’s Ms. Moss all about, anyway? A mysterious woman. She takes Tom to a room where they light candles and she tells him: “Find your silence.” Then she watches him from a laptop in a different room and masturbates. He goes into what appears like a sensory deprivation pool, where he tries blocking out the world.
Ian tells Jill about a “super tall” kid with a “scary face” he drew as a kid to have as an imaginary friend— the aptly named Tall Boy. He was a lonely kid with crayons for friends. They get talking about more personal stuff, like Jill’s marriage and her uncomfortable family history.
Back at the house, Jill finds a call incoming to her husband’s phone from Sarah. She answers it from the laptop, hearing a baby crying in the background. Sarah threatens to call the cops if he comes around again. The lights start flickering as Jill reads it, and you can be sure Pretzel Jack’s getting ready to do more protecting.
Vanessa is having a puff after getting off, though she has no idea there’s a clown-faced contortionist stalking around her house with a sharp object in hand. Jack starts playing Peekaboo games with Ms. Moss, who’s horrified to see him appear from out of nowhere. She tries to shoot him down with no success. Then Jack goes in to drown Tom in the pool.
This episode closes out to “Catcher in the Rain” by Good Question.

Another fantastically disturbed episode.
“Love Hurts” is next time.