Ian (Nicholas Pinnock) thinks of being busy in bed with his wife, who wants more of him at home than he’s able to give. He’s caught between personal life and work. His work has him in a nasty position. Management isn’t pleased with what he’s been up to lately. And it turns out Ian’s got another identity: Wesley Pierce. It was “ten years” ago he came to the Prime world, shedding one life for another. It’s either bring Emily (Olivia Williams) to Management, or his new life goes away quickly as it was given to him.
At the Office of Interchange, Peter (Harry Lloyd) goes downstairs to have a quiet chat with Claude (Guy Burnet) in his cage. The Prime ambassador asks if Quayle has killed his Other. He knows plenty already: “Just double the fun. Double the information.” He’s got the drop on Quayle and his spy wife, Clare (Nazanin Boniadi). So, what’ll Mr. Director of Strategy do to keep his secrets secret? Well it seems the ambassador wants to make a deal for $2-million. They’re interrupted by Naya Temple (Betty Gabriel). Lambert gives her the same deal, only it’ll be for info on Indigo agents, including Shadow a.k.a Clare. A perfectly tense moment, as Claude plays his own version of The Price is Right with these two. Then, on top of it all, Emily’s in the mix talking with Naya, which only serves to make Quayle more nervous while he’s playing dangerous games. 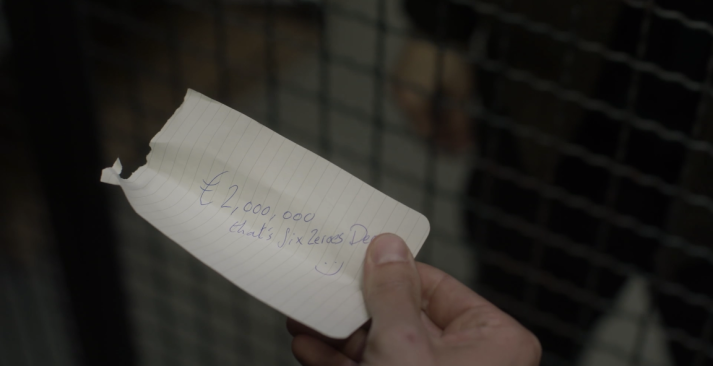 “My loyalty has always gone to the highest bidder”

Mira (Christiane Paul) and Osman (Karan Oberoi), along with a crew of hired people, are preparing to break somebody out of a facility. Could the place where we saw Mira episodes prior be outside of the secretive Echo facility? Could Mira have been held there at one time? And who might she be looking to break free of captivity?
Inside Echo, Peter Prime is obsessively watching a game of footy on the television, rewinding a tape from the “other world” over and over. He shows his notes about the game from both sides and their variations to Howard (J.K. Simmons). He’s trying to figure out his own points of departure, not unlike Yanek (James Cromwell) in his own strange ways. Meanwhile, in the Alpha world, Peter’s trying to wipe his Lambert problem clean by asking Howard Prime to go down there and sneakily kill him. Big uh oh?
Clare meets her old friend/contact Spencer again, hearing about Lambert getting grabbed. She’s worried about what will come out if “this goes bad.” She’s now preparing to torch her entire life. Such is the life of the spy. That means she’ll have to permanently silence anybody and everybody who knows too much about her. Has she developed too many feelings to off Peter?
At the office, Howard Prime is heading down to get a gun from the confiscated items so he can put Lambert down. He’s there under the ruse of getting diamonds to pay off the ambassador while he slips a gun out under the attendant’s nose. Simultaneously, Naya’s about to head down to talk with Lambert, dragging Quayle with her. They find dead guards on their way, coming upon Claude’s corpse in the cage. But Howard Prime isn’t the one who did the job.
The United Nations alarm is set off and the place is put on lock down, likely freaking everyone out after the Indigo attack not long ago. And now everybody’s being looked into, to root out the culprit. Even Peter’s subject to having his office searched when Ms. Temple suggests it would be “bad for morale” if the bosses weren’t treated the same as everyone else. But a problem’s uncovered elsewhere when the attendant from confiscated items reports the gun missing.

At Echo, Yanek sits with Howard for a session. We find out more about the warden, who’s got a deal with Management— he looks after the prison to atone for “past sins.” He’s frustrated by Howard, believing the man can’t see what’s happening to him. He met his Other once. Yanek also says he’s the reason the worlds diverged.
Naya calls Howard Prime in for a conversation. She wants to know more about him. She asks if his “life is in danger,” and thinks there could be something else altogether going on behind the scenes. She suspects Quayle of orchestrating everything and she’s sure he enlisted Howard to kill Lambert. Oh, my. Fewer and fewer options for Peter and Howard Prime at this point, though the latter floats the idea to “bring this to an end.”
Things at Echo go haywire. A riot begins when Peter Prime’s videotapes are misplaced purposefully. The power’s shut down and emergency lighting comes on, just as the guard from the facility Mira’s been conspiring with lets her and her people in to gun down whomever they can to get towards their target.
While Peter calls home, his wife is having sex with her former lover Spencer— the man she named their daughter after, OUCH! All this trouble he’s gone to for the woman he thought he knew and loved. Now, he’s afraid to face the music that’s coming. He goes to the toilet where Howard Prime dumped the gun and retrieves the weapon. He puts the gun to his head before he discovers a woman he’s known for ages at the office is actually an undercover Indigo operative. She sacrifices herself as Shadow, pulling the trigger and putting a bullet in her own head.
Emily Prime has arrived at Echo, hearing the shots firing off underground. Inside, Howard tries not to get shot while bullets fly everywhere. Mira comes face to face with Yanek, who knows her mother. Any further connection? (Could he be her father?) She gets away before Yanek before Emily can stop her. Howard at least gets found by Emily, who leads him out of the prison.

Fantastic chapter in Season 2! This series has been so rewarding in terms of character development, and the backstory coming out as we dive deeper is getting really exciting.
“Twin Cities” is next time.