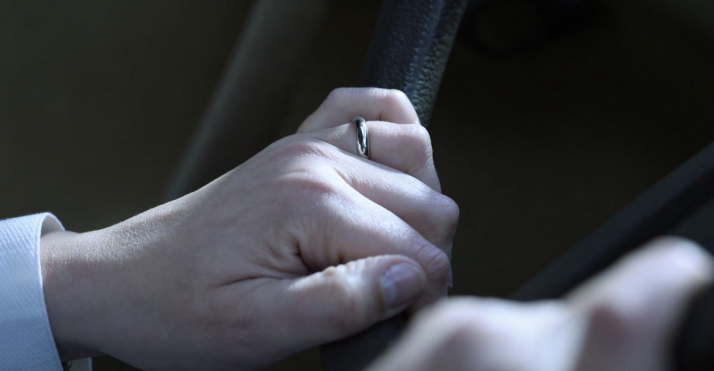 Mira (Christiane Paul) has arrived at a facility that looks long out of use, only the fence is electrified and signs warn not to enter. It’s in fact private property. She walks along the fence until a guard confronts her. What’s she planning, exactly? Hard to tell with her, given the terrorist violence she’s known for following the Indigo attack on the Office of Interchange.
Go back to 1984, when Emily was a young lady. Her parents were separated. She was off on a weekend adventure with mom. “Only lie a little,” her mother gives her as advice, “If you lie a lot, people can see through it.” Skip ahead to today, on the other side in the Prime world. Emily Prime (Olivia Williams) is driving into the woods somewhere on a lonely road. She comes to the place where she and her mother stayed on one of their weekends, where the man who owns the place, Phong (Ozzie Yue), remembers her as Belinda— the name she made up with mom.
In the Alpha world, the first Emily’s trying to regain her total brain function, and Howard Prime (J.K. Simmons) continues playing the dutiful husband at home for her while doing whatever needs doing at work. Elsewhere, Clare (Nazanin Boniadi) meets with Claude Lambert (Guy Burnet), having a slightly antagonistic chat full of “innuendo” and worry about what might happen to them both if they’re exposed. Lambert’s got no idea her husband Peter Quayle (Harry Lloyd) is nearby, the married couple working together tenuously with Howard Prime pulling strings on his end, too. They’ve managed to snatch Lambert up off the street, dosing him with fentanyl, while Clare slips into his little “crash pad.” But she also has no idea about Lambert Prime, either. Where could he be? The original Lambert’s taken to the same place Baldwin (Sara Serraiocco), tied up, and prepared for a hand-off along with the assassin. That is, so long as all goes as planned. In the Echo facility, the original Howard’s having a tough time. He’s been beaten and broken and he’s relatively alone, in the midst of all the men his Other’s put in prison. He at least has Quayle Prime, whom he feels is “more human” than his Other in the Alpha world. This Quayle’s definitely not well in the head, but that may only be a by-product of being locked in a place like that. For now, Howard doesn’t have much hope of getting out.
Ian Shaw (Nicholas Pinnock) has taken the briefcase he located to a tech friend, Moritz (Tadhg Murphy). The case is opened and inside is one of those machines used to communicate with Management. Ian asks Moritz to extract whatever he can from the device. They’re on sketchy ground here. Curious if there’s a way for Management to track their equipment, or if it’s been effectively hidden from them.
Jump back to young Emily, who almost walks in on her mother in the shower with a man. She ran off from where they were staying, into the trees and out towards a church by the water. She took her mother’s platinum ring and hid it away. In present time, Emily goes to the same place. She finds a package where she left the ring. This is where her Other left the classified files.
Speaking of her Other, the real Emily is returning a copy of Günter Grass’s The Tin Drum. She discovers her history with the book, she’s taken it out a lot. Only one other person has taken it out, and the man has requested to be notified when Emily returns the copy. Very strange, no? Who could it be? Howard? Or someone else?
Baldwin gets herself free from her bonds. Now, Lambert wants to get out, as well. Remy (Caleb Frederick) gets back to see the assassin on her way through the window and Claude bleeding everywhere. He’s killed, and Baldwin continues to kill anyone else from the team who’ll come through the door. Looks like Howard Prime’s plan is going to backfire in unimaginable ways. At Echo, Howard is brought into a session with Yanek (James Cromwell) and Quayle Prime briefly before it’s done. Then he and Yanek are alone. The warden gives him a shot, then they get to chatting. He’s looking for “points of departure” from one person to their Other. He wants to find out how two people can split in two, to see where they diverge, how they do, and why. A noble experiment. Maybe not so noble in the way Yanke goes about it, though. Nevertheless, Howard tells the warden about his history around the ’90s, particularly his marriage, his job, and his family. They get stuck on his father. Yanek sees the father as a major point of departure for the two Howards.
In the library, Emily sees it’s Lambert who gets the notification about the Grass novel. Oh, my. Thicker, thicker the plot is stirring. She follows him to a bench where they sit together. He was her source. And the Lambert that was killed earlier, taken by the team, was actually his Other. Goddamn! Things are getting twistier. At the warehouse, Howard Prime finds the corpses left in the wake of Baldwin’s escape, realising things have become beyond complicated. He goes home and finds he’s back before Emily, surprised to see her up and out of the house. She tells him about the “signal to a source” and meeting someone, like back before her accident when she was working. This makes Howard Prime angry, driving a wedge between them.
When Clare sifts through some files she finds files from Alexander Pope (Stephen Rhea). On a flash drive she discovers more info about her past, specifically that Mira and the others had her parents murdered under the guise of it being part of the epidemic. They purposefully orphaned her, to transform her into an operative for their cause. Whoa. 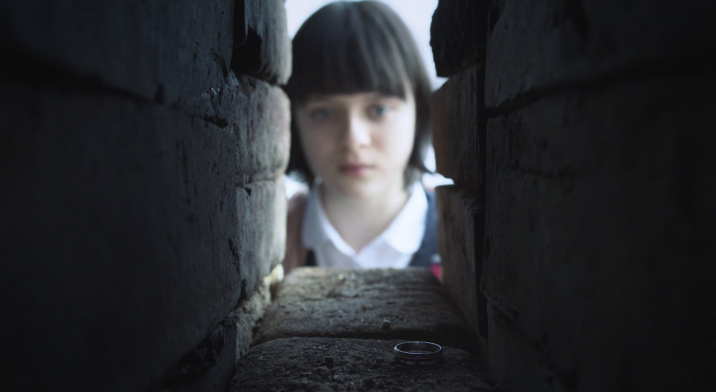 “He sees his world for what it is— not with empathy, with clarity.” 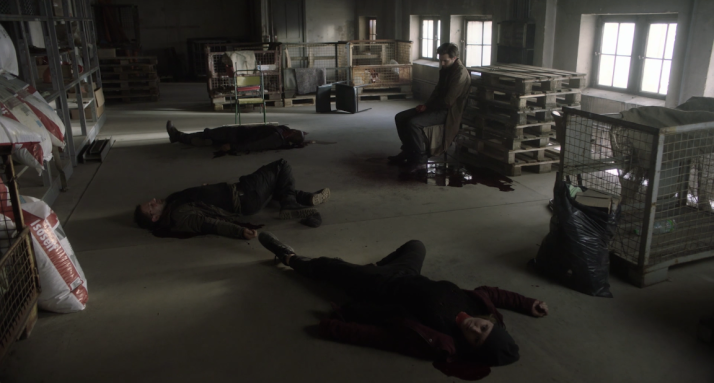 Ian goes back to Moritz’s place, where he sees the door open. Inside he sees Moritz dead on the floor, the place is trashed. On top of that, the briefcase is gone. He’s being blamed for things. Mira’s pal Osman (Karan Oberoi) has the Management device. He and Mira have their own plans for the briefcase, and it involves the place where she scoped out the structure behind the electrified fence.
Howard gets to have a ice shave at Echo. Then he goes to sit with one of the guys who pounded the shit out of him, Marcel (Karim Saleh). He tries to speak with Marcel about the other side and how they were work colleagues. He somehow gets through to the man emotionally, then he apologises for what his Other did to him. But it gets him nowhere ultimately, only shoved to the ground harshly. Howard’s learning that sometimes we have to see the despair in the world instead of trying to find the hope, because sometimes there IS no hope, and that’s not pessimism— it’s reality.
At the train station, Emily Prime meets Naya Temple (Betty Gabriel), and it sounds like she wants Ms. Temple to meet Lambert. At the office, Naya goes to find Quayle, taking him down to where they have Lambert caged, which strikes Peter as terrifying, seeing as how he thought the man was dead. Lots of UH OHs going on here, and it’s going to offer excellent things going forward. “Shadow Puppets” is next time.