Baldwin (Sara Serraiocco) remembers the moment Nadia died in front of her eyes. She feels guilt and goes to visit her Other’s grave, where Spencer (Ken Duken) finds her. He wants to contract her for a job. She refuses, wanting to turn her back on a life of assassination. Spencer needs Emily (Olivia Williams) dead because she’s “remembering things” that are troublesome for Indigo. The former hitwoman doesn’t want to complete the job she once had on her very own list. Will the desire to be free of Indigo forever push her to kill Emily? Or, will she wind up helping the woman instead?
Poor Howard (J.K. Simmons) has a bullet in him. He’s dragged off by Emily Prime, who contacts her daughter, Anna (Sarah Bolger), for medical expertise. Anna believes she’s working on her father, and Howard’s out of it, unsure why she’s calling him “dad.” Tricky situation! Especially when the daughter starts singing a song to him that obviously means something to her and her actual father. It still means something to Howard: his mother used to sing the song to him (“Hard Times (Come Again No More)” written by Stephen Foster). Again, we see how the lives of Others from the two worlds connect, collide, and, in contrast, where they diverge. Isn’t it interesting how music is a connection between the Two Howards and also between Baldwin/Nadia? 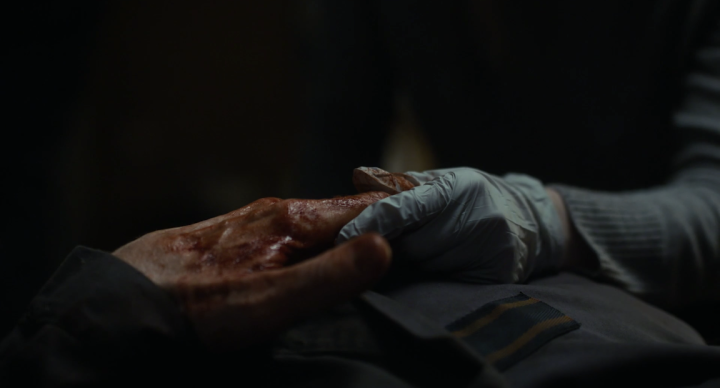 At the old Indigo academy, where sleeper agents were taken after first crossing over, Clare (Nazanin Boniadi) shows her husband Peter (Harry Loyd) around where they were tested and trained. She learned to live a “fantasy life,” serving her well once she had to do spy duties. Sort of like returning to a haunted house, ghosts of another life clinging to the dilapidated building. Clare keeps clinging, too. Those Indigo beliefs haven’t washed off. Everything Mira (Christiane Paul) drilled into her remains. Alone later, Peter stumbles onto the recording of Pope talking about Clare’s parents, only furthering his sense of the fanaticism instilled in the stolen children by Indigo and making him want to forge something new for him, his wife, and their daughter.
Howard Prime searches the Quayle house, realising they’ve fled. He’s now left with an uncertain feeling in his gut. Back at the apartment, his relationship with Emily is difficult because he has to play the part of the real Howard. Nevertheless, the two of them come together in hopes of determining what Indigo might do next. Emily has trouble with the apartment, like she recalls it being arranged differently, while also having a “muscle memory” that helps her remember a hiding place where she stashed a gun.
The worlds now converge more. Anna has a memory of going somewhere with her mother that Emily Prime doesn’t remember. But the other Emily does— more confirmation of the first Emily visiting the other side. She pulls a picture, drawn by Anna, out of a frame. She admits going to the Prime world for years. This is all compounded into something stranger given the fact the Two Howards are in each other’s places, meaning Howard Prime’s having a wild moment with Emily— she’s elated about seeing her daughter, who’s dead in the Alpha world, alive and well, though he feels it’s uncomfortable. He uses the chance to learn more about his Emily/his own life through this Emily’s eyes. She claims the other Howard was a “violent man.” In a way, it offers Howard Prime a chance to learn something about where/why his life became something else and his Other became the man he is today. Yet it’s all very weird.

“They put that in you” 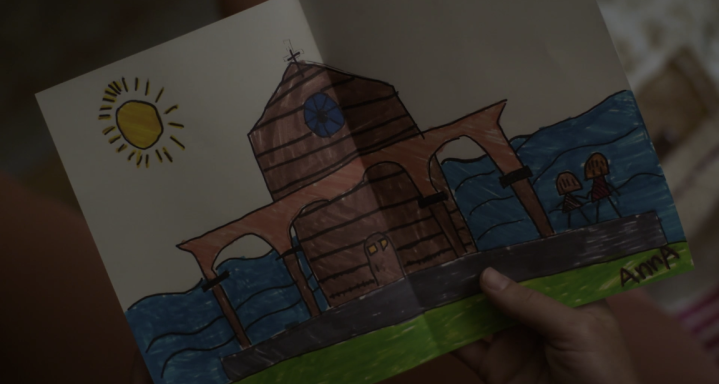 On the other side, Howard and Emily Prime are at least able to be themselves around each other. He talks about the night of his Emily’s supposed accident. They also revisit moments which connect to the lives of their Others, and, in turn, start learning things about themselves, too. They’re all realising they’ve been in denial. Those are the least of their worries. Indigo’s out there plotting their big move. Howard feels betrayed by his wife and suggests he has to “make a deal” with Management.
Howard Prime’s helping Emily decipher something she wrote in code. They start by looking in one of her favourite books, by Rainer Maria Rilke. Inside is a note containing numerical code. They start to go through the book and find an address in code. This leads to romance, complicating everything worse than it’s gotten already. Oh, and Baldwin? She contacts Howard Prime to let him know Indigo are coming for Emily— and it’s already started! He brutally fights off soldiers in the dark, showing us just how violent he can be when needed. This leads Emily to the realisation he isn’t her husband, and she kicks Howard Prime to the curb.
In the basement of the academy, Clare and Peter find remnants of Indigo. She finds evidence of tests being done for the “flu virus” that’ll help balance the scales between both worlds. Mira’s going to release an epidemic on the Alpha world as retribution for what happened all those years ago. This drives Peter to go see Naya Temple (Betty Gabriel), revealing his wife as Shadow.

Like always, Counterpart delivers the goods. Now and then the plot can get thick, but it’s always explained in such an exciting way, often visually without TOO much dialogue, and this is one of the many reasons the series has been so successful. Smart, snappy sci-fi that doesn’t get too bogged down.
“You to You” is next.